END_OF_DOCUMENT_TOKEN_TO_BE_REPLACED

GAUGED by the performance of stock market indexes, Donald Trump's presidency has been a smashing success in its first six months, writes Gary Dorsch at Global Money Trends.

US stocks rose sharply in the first six months of 2017, with the S&P500 index rising 8%, outstripping the return most Wall Street strategists predicted for the full year and doubling the average 4% January-thru-June gain since World War II.

The Dow Jones Industrial Average topped 20,000 for the first time and made 24 record highs. US companies posted their best quarterly profit growth in six years. And electric car maker Tesla eclipsed General Motors as the nation's most valuable auto company.

Tech stocks have shined the brightest. The Nasdaq – powered by 25% to 30%-plus gains from tech giants like Apple and Facebook – surpassed the 6,000 milestone. Amazon and Google parent Alphabet joined the "$1000 Stock Club" only to end the quarter a bit short of the mark. 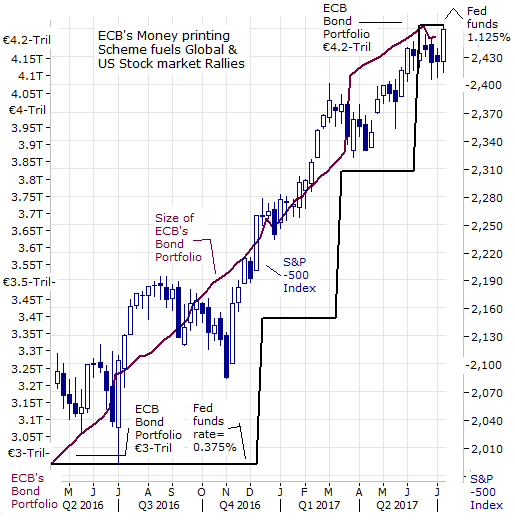 The S&P500 index has now gone more than six months without a one-day drop exceeding 2%, the longest such stretch in a decade.

So while the US stock market might seem ripe for profit-taking, traders continue to see all dips as buying opportunities, and stocks are bought quickly. There's a lot of dry powder out there.

The Trump family and his close knit group of West Wing insiders like to take all of the credit for the booming stock market, even though Trump hasn't shown the ability to influence Congress or show any proof that his policies will ultimately materialize into law. The equity market has been pricing in a lot of hope since the November 8th election, but nothing has been accomplished on health care, tax reform, regulatory relief or infrastructure spending – that's the big sales pitch the market has been buying since the Trump election.

This market appears to be up entirely on fluff. Some of the "hard data", like declining retail sales, are coming in below forecast and point to a possible soft patch of growth. But traders shouldn't expect a big chunk of the SPX's 19% gains since Election Day to start to evaporate. Market technicians have observed the raw data, and – since 1950 – whenever the S&P500 has rallied over 8% in the first half of the year, 84% of the time it has also rallied by 4.5% on average in the second half of the year.

Before his election, the market was apprehensive that Trump would create market turmoil, taking protectionist actions that would be negative for stocks. So far, Trump's only action on trade, was to slap a 20% tariff on Canada's exports of soft lumber. Trump's bombastic rhetoric has softened on Mexico, and he also decided not to label China a currency manipulator, even though Beijing is ignoring Trump's calls to deal with North Korea's nuclear threat.

Markets had become increasingly disconnected from macro-economics. When traders ask why, the manipulative actions of central bankers usually comes to mind. For instance, the record shows the Swiss National Bank  and the Bank of Japan are accumulating massive positions in the financial markets, funded by unrestrained printing of their own currencies.

The BoJ is powering ahead with Yield Curve Control like a bullet train, racing towards its 2% inflation goal – or bust. Switzerland's foreign currency reserves continue to grow and now total $670 billion, equivalent to the country's GDP. At least the BoJ is creating currency and buying interests in Nikkei-linked ETF's The SNB is doing something even more unprecedented; it's acquiring positions in US-equities and has been for the past 3 years. The SNB has invested more than $80 billion in some of the US's most iconic companies by creating currency out of thin air.

There's no telling how active the Swiss National Bank is on a given day or whether it jumps in to support the markets after drops of close to 1%. In its latest filing; the SNB's portfolio included more than 15 million shares of Apple, 13 million Intel, 25 million General Electric, 6.6 million Facebook, 10 million Ford, 13 million Intel, and on and on and...In fact, a printed list of all the stocks the SNB owns is 66 pages long.

What could go wrong? And does this have any influence on equity prices?

While the Swiss are running a massive hedge fund funded by FX reserves, the Bank of Japan and the European Central Bank have taken the more conventional QE approach of accumulating a huge amount of government bonds.

The BoJ now owns 42% of the entire amount on issue in the world's second largest bond market. It also reaffirmed its Yield Curve Control of manhandling the 10-year JGB yield near zero per cent. This will be maintained by further purchases of bonds "as long as is necessary" to produce a rate of inflation that "exceeds and stays above" its elusive 2% inflation target, in a stable manner.

As is the case in Switzerland, the BoJ's balance sheet is close to the size of Japan's total GDP. But it seems no red lights are flashing at the BoJ: it's onwards and upwards with zero per cent JGB yields.

So three of the world's three biggest central banks continue their currency war and, in turn, have helped pump up stock and bond prices. As for the Fed's threat to reduce the size of its bond portfolio, starting in Q4, odds are that the dovish Fed chief, Janet Yellen, will get cold feet at zero hour, and kick the can down the road for the next Fed chief.

If Trump's upcoming pick to run the Fed squashes the plot to unleash QT [quantitative tightening] next year, then he would deserve partial credit for the rally to all-time highs. But most of it belongs to central bankers in Europe and Japan, as well as emerging economies also engaged in the global currency war.