END_OF_DOCUMENT_TOKEN_TO_BE_REPLACED

THERE IS a fatal flaw with democracy, writes Gene Arensberg at GotGoldReport.

We allow people who get a check from the government to vote despite the direct conflict of interest.  That is why all democracies are doomed eventually to turn into debt monsters that have to be killed off in a great deflationary Armageddon every once in a while.

We have the unfortunate condition of being in the stage where that Armageddon scenario has become much more likely and sooner, rather than later.  We believe the fiat currencies in use today are a barometer signaling that a major, generational storm is bearing down on the debt-bloated western democracies.

If the work and research we have done on this subject is right, the "good news" is that the events leading up to the eventual bond market collapse, social upheaval and mayhem ought to be extremely profitable for those who prepare for it in advance, don't get sidetracked or bucked off or out of their positions.  It ought to be good for "stuff," hard assets, food, fuel, energy, some real estate and some collectibles.

Because as the government beasts realize that the debt window is closing they will fight like mad to maintain their power and control; they will try hard to keep the band playing as long as they can, pretending that an unsustainable condition of way too much debt is nothing but a short-term liquidity problem; and, like Weimar Germany did in the 1920s, that means they will be running the printing presses day and night as long as people continue to use and have any confidence at all in the old, dying fiat money.  That is even as its purchasing power is evaporating and the people on the street have resorted to barter, gold and silver for ordinary needs.

History tells us the effects of unchecked monetary inflation are gradual at first, but once confidence in the currency reaches its final tipping point, the collapse in its value can accelerate with lightning speed.

Faced with war reparations from WWI far exceeding the national ability to bear them, war debts and other crushing national obligations, the leaders of the Weimar Republic set out to deliberately inflate its currency, apparently to make debt easier to pay.  They "succeeded" beyond their wildest dreams, helped by constant political chaos and severe government mistrust. The famous hyperinflation of postwar (WWI) Weimar Germany is a spectacular example of a fiat currency collapse.

According to Wikipedia, in 1919 one loaf of bread cost 1 mark; by 1923 it cost 100,000 million marks. The collapse of the currency was swift, but the effects were devastating to the population.  The cascade of confidence first rewarded debtors and punished savers, but the deflation that followed spared none but a very nimble few and, of course, holders of precious metals.

It was under those chaotic conditions that the people chose or accepted authoritarian rule and a sociopath could rise to power.

The point is only that once trust in the currency reaches a tipping point, major change is inevitable.  But through it all US Dollars, then backed by and as good as gold, gold and silver maintained and even gained in their purchasing power, but were in chronic short supply.

There is no reason to fear that the US will go as far down the road to currency collapse as did the Weimar Republic, but the destruction of the purchasing power of the greenback is already advanced as evidenced in the chart below comparing the US Dollar index with gold.  Notice that the only breaks in the long term trend have been in times of crisis as wealth seeks the temporary shelter and liquidity of the least sick member of the Fiat Currency Leper Colony. 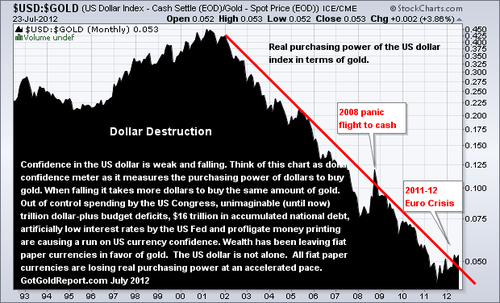 More and more people are becoming aware of the fact that our currency is an irredeemable debt-based token of confidence, not something of intrinsic and lasting value.  More and more will become aware of it in the future.

Today in Europe it is the very same story for the European common currency as evidenced in the chart below comparing the Euro index to gold. 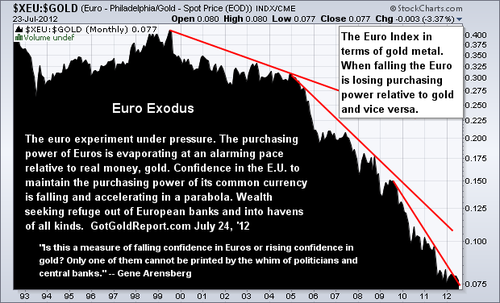 The relative "strength" today of the USD is actually a measure of accelerating weakness and confidence destruction in the EUR.  Comparing the two fiat currencies with each other misses the, uh, "mark."  To understand how sick the fiat currency lepers are one needs to compare them to something stronger and healthier, not to each other.

Gold backed US Dollars were a safe haven for people in the Weimar Republic during the collapse of its currency, but they are no longer fully backed by gold and no longer a safe haven.  Gold and silver, on the other hand, are the natural havens for wealth to hide as the greenback, the Euro, the yen and all other fiat currencies lose the people's trust and confidence today.

In theory it doesn't matter what a currency is backed by as long as the amount of it in circulation is strictly controlled.  The problem is that all fiat currencies end up being abused and diluted by their controllers (politicians, governments, central banks) once all ties with a monetary policeman, like gold for example, have been severed.  The fact is that politicians and central bankers are not now and never have been good at controlling the amount of currency in circulation when the currencies are not restricted by gold.

The fallacy that government can be trusted with something so important as the currency is about to become front and center once again, for the umpteenth time in history.