END_OF_DOCUMENT_TOKEN_TO_BE_REPLACED

The former revolutionary and hardline dictator of Cuba was among the 20th century's longest-serving leaders, third only to Elizabeth II and Bhumibol Adulyadej, the King of Thailand, who passed away in October.

Castro's death comes at a pivotal moment in US-Cuban relations. With trade between the two countries on the path to normalization, and with US airlines making scheduled flights to Havana for the first time in more than 50 years, President-elect Donald J.Trump has pledged to reinstate many of the Cold War embargos that were lifted by President Barack Obama.

"If Cuba is unwilling to make a better deal for the Cuban people, the Cuban/American people and the US as a whole, I will terminate deal," Trump tweeted on November 28.

In light of Castro's passing, let's compare and analyze the widely divergent economies of Cuba and Singapore under their now-deceased leaders, Castro and Lee Kuan Yew.

It would be nearly impossible to find two world leaders in living memory whose influence is more inextricably linked to the countries they presided over than Cuba's Fidel Castro and Singapore's Lee Kuan Yew, who passed away at age 91 in March 2015.

You might find this hard to believe now, but in 1959 – the year both leaders assumed power – Cuba was a much wealthier nation than Singapore. Whereas Singapore was little more than a sleepy former colonial trading and naval outpost with very few natural resources, Cuba enjoyed a thriving tourism industry and was rich in tobacco, sugar and coffee. 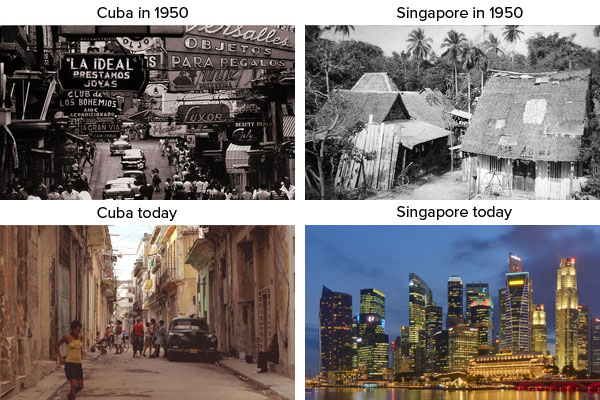 The ever-widening divergence between the two nations serves as a textbook case study of a) the economic atrophy that's indicative of Soviet-style communism, and b) the sky-is-the-limit prosperity that comes with the sort of American-style free market capitalism Lee introduced to Singapore.

Since then, its per capita GDP based on purchasing power parity (PPP) has caught up with and zoomed past America's.

Under Castro and his brother Raúl's control, Cuba's once-promising economy has deteriorated, private enterprise has all but been abolished and the poverty rate stands at 26%.

According to the CIA's World Factbook, "the average Cuban's standard of living remains at a lower level than before the collapse of the Soviet Union." Its government is currently facing bankruptcy. And among 11.3 million of Cuba's inhabitants, only 5 million – less than 45% of the population – participate in the labor force.

Compare that to Singapore: Even though the island is home to a mere 5.4 million people, its labor force hovers above 3.4 million.

Because of the free-market policies that Lee implemented, Singapore is ranked first in the world on the World Bank Group's Ease of Doing Business list and, for the fourth consecutive year, ranked second on the World Economic Forum's Global Competitiveness Report.

The Heritage Foundation ranks the nation second on its 2015 Index of Economic Freedom, writing:

"Sustained efforts to build a world-class financial center and further open its market to global commerce have led to advances in...economic freedoms, including financial freedom and investment freedom."

Cuba, meanwhile, comes in at number 177 on the Heritage Foundation's list and is the "least free of 29 countries in the South and Central America/Caribbean region." The Caribbean island-state doesn't rank at all on the World Bank Group's list, which includes 189 world economies.

Many successful international businesses have emerged and thrived in the Singapore that Lee created, the most notable being Singapore Airlines. Founded in 1947, the carrier has ascended to become one of the most profitable companies in the world. It's been recognized as the world's best airline countless times by dozens of groups and publications. Recently it appeared on Fortune's Most Admired Companies list.

We at US Global Investors honor the legacy of Lee Kuan Yew, founder of modern-day Singapore. He showed the world that when a country chooses to open its markets and foster a friendly business environment, strength and prosperity follow. Even on the other side of the globe, the American Dream lives on.