END_OF_DOCUMENT_TOKEN_TO_BE_REPLACED

Her are three things that you should know about.

Starting in May, countries that still buy oil from Iran could face US penalties. In response, Brent crude hit $75 per barrel for the first time in six months.

Oil and natural gas are the Middle Eastern country's most important export, so the policy is intended to hit Tehran where it hurts. The plan, announced last summer, appears to be working so far.

Between January 2018 and January 2019, Iranian oil exports fell by nearly 700,000 barrels per day (b/d). (The data could be inaccurate, though, since Iranian oil tankers are believed to be turning off their transponders in an effort to conceal themselves from satellite tracking systems.) 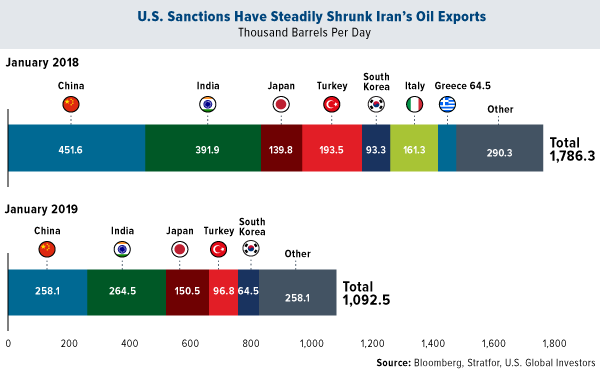 It's unlikely that all countries will immediately zero-out imports from Iran. I would be surprised to see China, the number one consumer, trim its imports much further. Iran is such a key strategic player connecting Asia and the Middle East as part of China's Belt and Road Initiative (BRI).

So who will pick up the global slack if Trump's plan succeeds and Iranian exports go offline? Trump suggests Saudi Arabia and the United Arab Emirates (UAE) will. Secretary of State Mike Pompeo also believes the US can, but this would "be a stretch," according to Bloomberg.

"Oil condensate from the Eagle Ford shale basin in Texas is similar, though a bit heavier than Iran's light South Pars condensate. But the Eagle Ford produces only about 150,000 b/d of its product, compared with Iran's daily output of 600,000 barrels in 2017."

#2. US Crude Inventories Climb More Than Expected
But maybe there's something to what Pompeo says after all. Thanks to its fracking industry, the US is producing oil at a breakneck pace.

This is turning up in domestic inventories, which have been building steadily over the past seven months or so. For the week ended April 19, oil stocks rose by 5.5 million barrels, much more than what analysts had anticipated. At 460 million barrels, total crude stocks now sit at their highest level since October 2017. 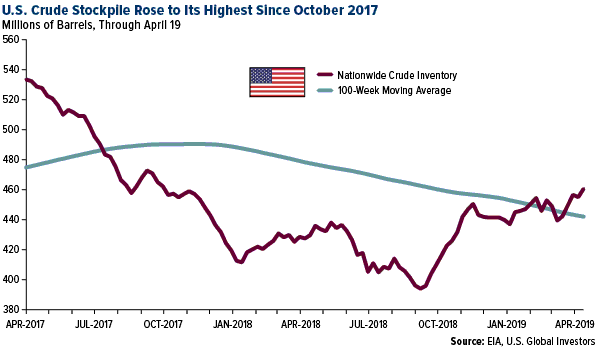 The US is already the biggest oil producer in the world, having overtaken Saudi Arabia and Russia last year. Looking ahead, US output could equal that of both countries by 2025, according to International Energy Agency (IEA) estimates. And in January, the Department of Energy said that the US will become a net exporter of energy in 2020 – something it hasn't achieved in almost 70 years.

#3. Oil Prices Were Headed for Overbought Territory...Until Trump Stepped In
Oil prices neared overbought territory, as you can see in the chart below, which shows oil's 14-day relative strength index (RSI).

When an asset's RSI rises above 80, it typically means that it's overbought, suggesting it might be time to take some profits. When it falls below 20, meanwhile, it often means that the asset is oversold, signaling a possible entry point. 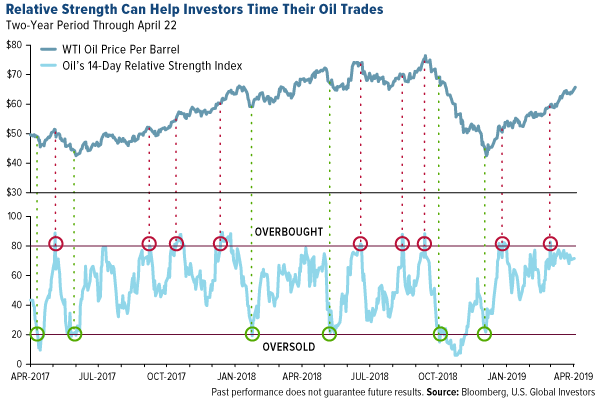 Again, oil prices looked to be on the overbought side, especially after the administration announced the end to sanction waivers. But the trend could reverse very rapidly.

Case in point: The President, who favors lower energy costs, claims that he "called up" Opec and told the global oil exporting cartel: "You've got to bring [gasoline prices] down, you've got to bring them down." Which, of course, is not in Saudi Arabia's best interest.

In any case, the price of West Texas Intermediate (WTI) plunged close to 4% that day, its biggest one-day drop since mid-December. As a result, oil's RSI sharply turned down to around 50, from nearly 72 on Monday.

Depending on what happens in the next few days, oil traders might be looking at another buying opportunity.