END_OF_DOCUMENT_TOKEN_TO_BE_REPLACED

If the credit crisis is over, why are credit insiders selling stock...?

IF the CREDIT CRISIS were genuinely over and the economy was genuinely on the mend, someone should have told Capital One Financial, one of America's largest issuers of consumer credit, writes Eric Fry for The Daily Reckoning.

In no particular order, Fairbank observed:

Fairbank placed this last observation in the context of an economy that is still wobbling on its feet and unable to generate employment growth.

"Despite last week's modest improvement [in the jobs report]," he observed, "the average time to find a new job remains very high, a sign that the job market is more frozen than in past recessions.

"Similar to labor markets, the housing sector remains severely dislocated, despite some signs of stabilizing home prices. There is a growing backlog of foreclosures. Inventories of homes in foreclosure or with severely delinquent mortgages are increasing. This is likely to put downward pressure on home prices as the foreclosure inventory hits the market.

"Continued weakness in housing puts pressure on the broader economy and makes any emerging recovery fragile. And some of the apparent improvements in the economy may not be sustainable. As government stimulus programs like Cash for Clunkers, first-time home buyer tax credits and other direct cash payments to consumers may have only fleeting effects."

During his presentation, Fairbank also sprinkled in a few dashes of optimism about the economy's prospects...and several dollops of confidence about Capital One's ability to "weather the storm."

Investors seemed to like what they heard, as Capital One's stock jumped more than 2% yesterday afternoon. Curiously, however, the insiders at Capital One cannot seem to find any reason whatsoever to buy the stock. In fact, they have been unloading it at a very rapid clip during the last few months. 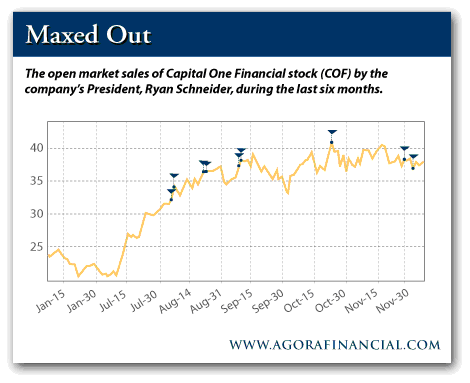 Fairbank, for his part, has not made a single open market sale since May of 2008. But most of the other company insiders have shown no such restraint. Ryan Schneider, for example, President of the Card division, sold 31,848 shares of COF (worth $1.18) during the last four months, and just announced his intention to sell another 84,518 shares. All totaled, these sales would represent more than half his holdings.

Over in the accounting department, CFO Gary Perlin, just sold $2.3 million worth of COF stock, or about one quarter of his holdings. (For perspective, the last time Perlin sold stock was in May of 2007 – less than one month before COF began its swoon from $81 to $8.)

The recent flood of insider selling at Capital One is no guarantee that conditions will soon worsen at the large consumer lender. But as a rule of thumb, insiders do not sell when they believe their stock will be going UP.