END_OF_DOCUMENT_TOKEN_TO_BE_REPLACED

Credit growth has HALVED over the last 12 months...

WE HAVE it on high authority – Reuters – that "the 'reflation' trades of 2016 that were supposed to mark a turning point in global markets are fading. Fast," writes Brian Maher, editor of Addison Wiggin's Daily Reckoning.

And CNBC senior markets commentator Michael Santoli sees the scribbling on the wall:

"The question now is how it ends – with a whimper or a bang."

David Stockman has his answer. And it's of the combustible variety:

"The sweeping Trump tax cuts and fiscal stimulus are dead as far as the eye can see...So now comes the fiscal bloodbath and the day of monetary and fiscal reckoning."

One sign that something has to give – and probably soon – is the widening chasm between stocks and bonds.

And therein lies a tale indeed...

Since peaking at 2.6% in mid-March, yields on the bellwether 10-year Treasury bond have slipped to 2.2%.

The rates market is pricing in the death of tax reform and dimming 2018 economic prospects.

Scott Minerd, global chief investment officer at Guggenheim, now projects that the 10-year yield could plummet to a dour 1.50% by summer.

Meanwhile, stocks bounce right along, merry as a wedding bell.

Thus, we have two seemingly incompatible market narratives locked in a bitter combat.

In this great tug of war, the market seems to pull on both ends of the rope...pitted against itself.

Which side is the "real" economy throwing its weight behind?

As most recently as Feb. 1 the Atlanta Fed's closely watched GDPNow had first-quarter growth around 3.4%.

But its latest estimate, out this week, weighed in at just 0.5%.

And Gallup reports that confidence in the economy is at its lowest in five months.

More rain: The March jobs report came in about 82,000 short of expectations...retail bankruptcies are rising...auto sales dropped sharply in the first quarter.

That's a rate of decline not seen since December 2008, according to The Telegraph's Ambrose Evans-Pritchard – the onset of the Lehman Bros. crisis.

He says that's "hard to square with the exuberant view of investors that the world is on the cusp of an accelerating economic boom."

So are Elga Bartsch and Chetan Ahya of Morgan Stanley, apparently:

"We have not seen such a sharp deceleration in bank lending to US corporates since the Great Financial Crisis...Historically, credit downturns have led recessions."

Rather disturbing for a global financial system more leveraged than at any time in history.

And if you'd like more evidence that the stock market is impossibly at odds with the real economy – deep in the dingles of bubble land, that is – consider the following:

Household net worth relative to GDP has never been higher.

In all its graphic detail: 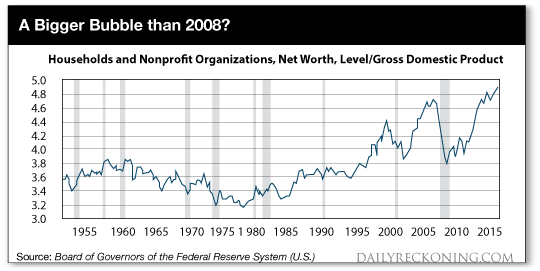 It was John Maynard Keynes who said the market can remain irrational longer than investors can remain solvent.

Many would argue the past eight years affirm Keynes in spades.

But if the bond market wins its tug of war with the stock market, reason could soon make its inevitable return – and with a vengeance too.