END_OF_DOCUMENT_TOKEN_TO_BE_REPLACED

Study the facts from the commodity markets, and speculators are not to blame for high prices today...

IT'S RARELY BEEN EASY for index investors, writes Brad Zigler at Hard Assets Investor. For one thing, there are always financial advisors who'll decry investors settling for "average" returns.

And as if it's not bad enough having money managers nattering them, now Congress wants to take it out of investors' hides as well.

In hearing rooms on both sides of the Capitol rotunda, commodity index investors are being pilloried by witnesses and legislators alike for pushing commodity prices – most particularly oil prices – higher.

Or so the argument goes. Long-only index funds, say critics, are indiscriminate buyers of commodity futures, snapping up contracts in oil, corn, soybeans and even less industrial commodities such as Gold at whatever prices are necessary to put all of their capital to work. This price insensitivity, it's said, excessively bids up the cost of commodities like corn and oil.

But is that really so? Do index investors deserve such blame?

It's easy to see why legislators might think so. After all, oil prices picked up the pace of their northward gallop at about the same time exchange-traded commodity index funds – the focal point of so much Congressional vituperation – hit the market.

Funds based upon the S&P Goldman Sachs Commodity Index (S&P GSCI) and the Deutsche Bank Liquid Commodity Index (DBLCI) were launched in 2006. Owing to their large weightings in crude oil – now 55% for the S&P GSCI fund and 35% for the one based upon DBLCI – critics said they were nothing more than oil index funds in disguise.

To make matters worse, exchange-traded funds and notes based exclusively on oil futures were also floated in 2006. And for a time, the carpers' fears might have seemed justified. There was a direct link between oil prices and long speculation.

Between January 2006 and January 2007, the price of NYMEX spot futures and the size of the net long interest held by large speculators – where index funds would be counted – rose and fell apace. (Open interest represents the number of contracts awaiting liquidation or delivery, a measure of supply analogous to shares outstanding in the stock market.)

The correlation between price and net long interest, at 78%, was, in fact, quite strong. In 2007, though, the connection between long speculative interest and price fell apart. NYMEX crude advanced to dizzying values, while the proportion of open interest controlled by long speculators actually declined. 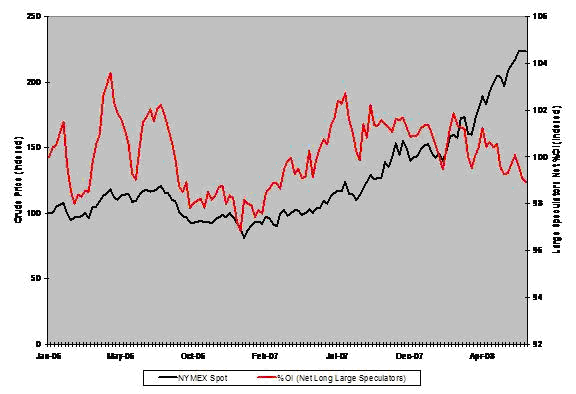 Because of the lack of specific detail in government-mandated reports, we can't tell how much of that net long interest in oil futures actually belongs to index funds.

The Commodity Futures Trading Commission (CFTC), however, has operated a pilot program since 2006 that monitors commodity index fund trading in certain agricultural futures.

The price trajectory of corn fairly well traces the same arc as that of crude oil, as it more than doubled over the past year. Corn's the largest agricultural component of both the S&P GSCI and the DBLCI. If we compare the net long position of index funds in corn between January 2006 and now, we might gain some insight into their behavior with respect to oil.

Back in 2006, commodity index funds held about a quarter of the total open interest in corn futures:

If you focus on the absolute size of long corn positions held by index traders, which grew 52% in two and a half years, you'd think you've found your inflationary culprit.

But look instead at how much of the total open interest was actually held by indexers. The influence of index funds as buyers, in reality, waned 6%.

So how can one attribute corn's near tripling, then, to index fund buying? The evidence simply doesn't support that point of view.

Ah, but witnesses tell Congress those crafty index fund managers can get their index exposure through over-the-counter swaps instead of futures. By doing so, they hide their tracks and circumvent position limits meant to keep speculators in check.

In a swap, an index fund obtains a commodity return from an investment bank in exchange for a stream of interest payments, tied typically to the London InterBank Offered Rate (LIBOR). With a swap, the fund doesn't go to the futures market itself, but the dealer selling the swap might do so to hedge its resulting exposure. If a swap dealer can establish that a genuine risk is being hedged through futures, it's exempted from speculative position limits.

Even though swaps dealers' hedge transactions may be exempted from position limits, they'd still be reported. They'd just show up as commercial transactions in the long column. So what happened to long commercial positions in corn over the past couple of years?

Commercial long positions, indeed, increased over the past two and a half years, but in gross disproportion to the hike in corn prices. Is it likely that a 2% uptick in the weight of commercial interests could cause prices to nearly triple?

If there's a lesson to be learned here it's this: Something is causing commodity prices to rise. That something doesn't seem to be index fund buying. There are a myriad of other reasons for oil and other commodity prices to be at their present levels, not the least of which are supply scares and denigration in the value of the dollar. It's more politically expedient, however, to paint a bull's-eye on the backs of speculators and index investors.