END_OF_DOCUMENT_TOKEN_TO_BE_REPLACED

2009 MAY NOT have been quite the crazy commodities barn-burner 2008 was, but it's safe to say that commodities investors did, in general, just fine, writes Lara Crigger at Hard Assets Investor.

There's little doubt, too, that "commodities investor" is increasingly becoming synonymous with "ETF investor". All told, commodity ETFs still make up less than 10% of total exchange-traded fund assets, which rose overall from $539 billion to $791bn in 2009. But commodity ETFs had a phenomenal year, with assets more than doubling to $73.7bn by year's end.

From the perspective of cash flows, investors poured $30.1 billion of new cash into commodity products in 2009, up from just $13.3bn in 2008. Yes, this is still small potatoes compared with assets in US equity ETFs ($379bn) or international stock ETFs ($210bn). Given these funds flows, however, investors are increasingly convinced of the value that commodities can play in asset allocation.

The bad news? Not all those Dollars flowing into commodities ETFs were necessarily well spent.

You see, many commodity ETFs – which trade like a share, bought and sold on the stock exchange but ostensibly tracking the price of the underlying metal, grain or energy input they represent – are based on futures contracts. Some, like natural gas poster boy United States Natural Gas Fund (NYSE Arca: UNG), hold just the nearest, front-month contract. Others, like UNG's sister product, the US 12-Month Natural Gas Fund (NYSE Arca: UNL), hold contracts of varying months out up to a year.

Regardless of the time frame of the underlying futures contracts, these funds hold their futures until just before expiration, when they sell the expiring contracts and purchase ones with a further-out delivery date. So in times of backwardation, when the price of a later futures contract is cheaper than the one with an upcoming delivery date, this structure works wonders. Essentially, it's a free lunch, because the fund buys the lower-priced contract, selling the higher-priced contract and pocketing the difference.

But 2009, however, was not a time of backwardation. Almost across the board, most commodities markets went in contango last year, which meant that current-month futures contracts became cheaper than those with delivery dates further away. Thus, every time a futures-based fund rolled over their contracts, it sold low and bought high, chipping away at returns every rollover period.

Saddest of all, 2009 commodity investors plowed more money into funds structurally designed to lose money during times of contango than other, less exposed ETFs. Consider the aforementioned UNG, for instance. Although the fund attracted more than $5.59 billion in net new inflows during 2009, it ended the year with only $4.63 billion in assets – and this during a year when the price of natural gas ended up close to flat overall.

In fact, rollover losses hit futures-based commodities ETFs so hard that they tended to lag behind their equities-based counterparts. The PowerShares DB Agriculture ETF (NYSEArca: DBA), for example, returned just 1% in 2009. The Van Eck Market Vectors Agribusiness ETF (NYSEArca: MOO), which invests in the stocks of companies in the same sector, rose 59%.

Several fund providers attempt to deal with the contango issue by releasing new products and revamping old ones. USCF, for example, last year debuted its 12-month natural gas product, which invested in a "strip" of 12 months' worth of futures contracts, matching the similar strategy of the existing US 12-Month Oil Fund (NYSE Arca: USL). Several products in the PowerShares lineup meantime follow "optimum yield" indexes, eschewing front-month contracts in favor of those that its algorithm suggest will minimize the effects of contango.

As for the top performers, the SPDR Gold Trust (NYSE Arca: GLD) was the fastest-growing commodity ETF in 2009, swelling from $17.6 billion in assets-under-management in 2008 to $40.2 billion in 2009. In terms of assets, it became the second-largest single ETF overall, and had the highest net inflows of any other ETF, at $13.8 billion. Score one for the gold bugs.

It will be interesting to see how physically-backed metals funds – which aren't exposed to contango, but which can Still Cost More than Physical Gold – play out in 2010. But perhaps the most important trend for commodity investors to keep an eye on this year is one that mostly fell out of public view as 2009 drew to a close:

Regulation of the energy markets. 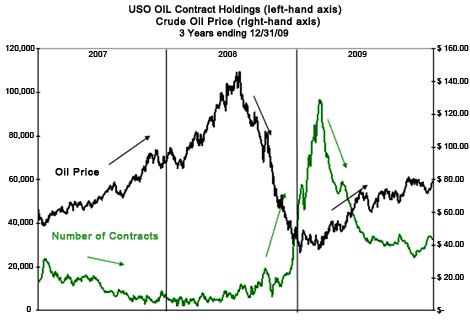 John Hyland, CIO of US Commodity Funds, even had to head to Capitol Hill and conduct a remedial math course, showing pretty conclusively how his fund at least really couldn't be blamed for the rise in oil. (See the chart above...)

After those hearings, regulators promised new energy market position limits would roll out as soon as possible, which sent several exchange-traded commodities products into rapid-response mode. Both the iPath Platinum ETN and UNG stopped issuing new shares temporarily, and at least one popular fund, DXO, closed and liquidated its assets altogether.

And yet, nothing came. The fire in regulators' bellies has mostly waned since then, too. But it hasn't disappeared entirely.

The CFTC has recently held a public hearing on this topic. Will anything meaningful come from it? And if so, how long will it be before a ruling goes into effect? That's a crystal ball of the cloudiest kind, I'm afraid. But it could easily be the biggest story of 2010 in the commodities investment space. And it's not even Martin Luther King Day...

Buying Gold today? "If there's an easier way I've yet to find it," says one BullionVault user...