END_OF_DOCUMENT_TOKEN_TO_BE_REPLACED

Central banks and others draw their swords...

"QUANTITATIVE EASING" (QE) is without a doubt the most powerful weapon central banks possess. TheY use it to manipulate interest rates, the local currency's exchange rate, and to rig stock markets, writes Gary Dorsch , editor of Global Money Trends.

But one of the unintended consequences of massive money printing is the leakage of liquidity into the commodities markets, which fuels inflation worldwide, especially in emerging nations, where food and energy account for more than half of household budgets.

In Japan and the United States, the massive expansion of the monetary base, (by a combined $3-trillion since March 2009), including the amount of money in circulation, and excess cash held by banks, provided the high-octane fuel for a powerful rally in the Continuous Commodity Index (ticker GCC), to an all-time record high.

With his polling number plummeting, and US-gasoline prices approaching $4 /gallon at the pump, US President Barack Obama turned to the "Plunge Protection Team" PPT for salvation. The upward spiral in commodities was led by the kingpin Silver market, having surged to as high as $49.50 /oz in late April, up +175% since the Fed first signaled QE-2 in late August 2010.

On April 29th, after the Friday closing bell, the CME decided to unleash its firepower at the kingpin – Silver with a series of 3 rapid fire increases in the margin maintenance requirements, that's used as collateralize its flagship 5,000 /oz contract.

Speculators in the silver futures market were forced to liquidate positions after the CME Group hiked margins by a total of +84% in trading costs in the past two-weeks, that ignited a nearly unprecedented sell-off. On May 5th, Silver plunged more than -10%, its biggest one-day drop since the Hunt Brothers price squeeze, dragging gold 3% lower to $1,475 /oz, as panic selling snowballed across the commodities sector: 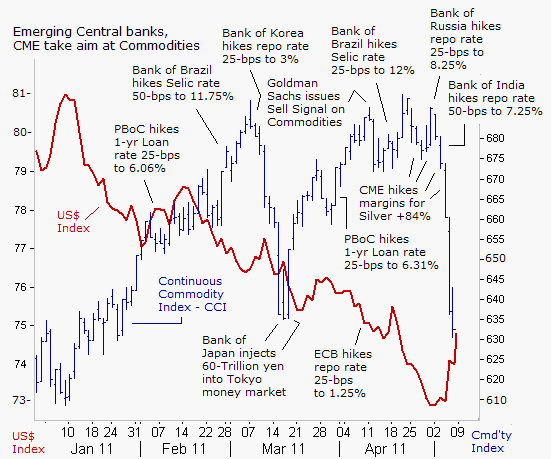 By simply aiming its firepower at the center of the speculative froth in the commodities sector – the Silver market – the CME´s actions ignited contagion sales of other high flying commodities, such as copper, corn, crude oil, unleaded gasoline, and soybeans. However, more importantly, in the background, there is a consortium of central banks from the emerging nations of Brazil, Russia, India, China, and Korea (BRICK), and the ECB that are acting in unison, to build a barrier to the commodities markets' rally, by lifting their interest rates in a coordinated fashion.

Looking back at history, in the period between May and July of 2008, it was the same consortium of BRICK central banks, along with the ECB, that tightened their money spigots, in unison, as crude oil moved above $140 /barrel. The concerted tightening campaign led by BRICK and the ECB triggered the initial downturn in crude oil and commodities from their record highs, even before the Lehman crisis ignited the massive meltdown in Q4 of 2008.

There´s one other caveat – none greater than the buzzword from the second half of 2008 – "Demand Destruction," which can set in, once commodity prices become too high for consumers to afford to pay. Thus, there's an eerie sense of déjà vu when viewing today's commodity markets, which is once again stymied by the Emerging central banks, with token support by the ECB.