END_OF_DOCUMENT_TOKEN_TO_BE_REPLACED

The outlook for commodity futures – including gold – as 2009 begins...

COMMODITY PRICES were volatile in 2008, reports OilnGold.com, with the Reuter/Jeffrey CRB index surging 32% by July, only to tumble by more than one-half by year-end.

Looking into 2009, as global economic conditions continue to point to the downside, business and household demand for commodities is expected to contract further, with a trough seen possibly in the second half.

Worldwide, however, central banks are busy stimulating their economies by cutting interest rates and adopting Quantitative Easing policies – and that should give precious metals such as Gold in 2009 a boost. Geopolitical tensions in the Middle East remain uncertain and any pronounced conflicts will raise concerns about supply disruptions.

However, we think here at OilnGold.com that any rally in oil should be short-lived unless the bigger demand problem is solved. 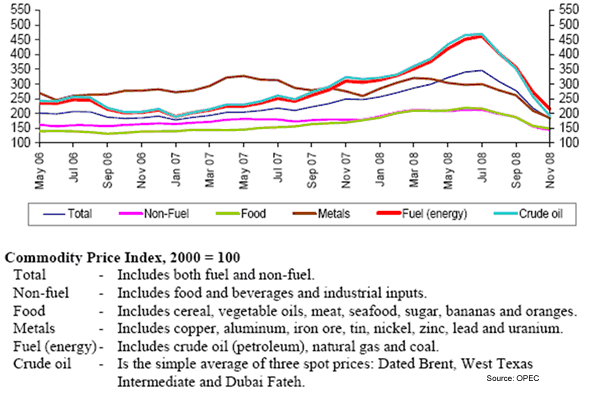 Turning first to crude oil, demand will continue to be weighed down by the recession hitting the major OECD economies.

According to OPEC, the oil cartel, total world oil demand will reduce by 0.2% and average some 85.7 million-barrels-per-day in 2009, as demand growth in China, the Middle East and other Asian countries will be more than offset by contraction in the developed OECD.

Although the oil price has fallen 60% in 2008 – and it's down more than 70% from July's peak at $147.27 per barrel – it's expected to remain under pressure at least in the first half of 2009. In the second-half of 2009, the oil price may at last bottom, and demand should have reached a trough. What's more, many oil projects will have been cancelled by then.

Goldman Sachs anticipates further downside in crude oil during 2009 from the current level, reaching $30 per barrel in the first quarter and then gradually improving to $42 by July. The end of 2009 should see oil reach $65 on Goldman's analysis.

Merrill Lynch also sees oil troughing in the first-half of 2009 in line "with the seasonal slowdown in demand. Then, as economic activity in OECD economies starts to recover, we see oil prices recovering modestly in 2H2009," it says. 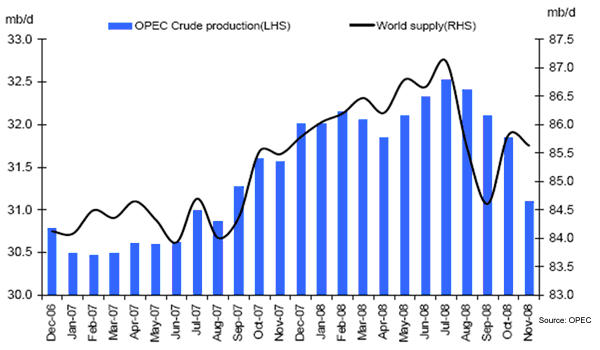 Moving onto natural gas, we think it will continue to suffer from oversupply in 2009 as industrial and gas-generation demand reduce, alongside the decline in oil prices.

As commodity and natural gas demand continues to weaken into 2009, many gas companies are already cutting their capital expenditure plans aggressively – which will tighten supply against the latter-end of 2009. However, alternative forms of energy may also have a negative impact on the demand for natural gas. Credit Suisse says it is cautious, as "the rollout of more renewable into the electricity system could have unexpectedly negative impacts on both traditional power generators and on demand for natural gas."

Despite the extreme volatility in 2008, gold is expected to remain the preferred safe-haven asset for investors next year. Moreover, the low interest-rate environment worldwide should be expected to prove good for gold, too.

Central banks around the world have been adopting a low interest-rate policy to try and boost demand, hence lowering the opportunity cost of owning gold. (Gold Investment more usually loses out when competing with cash deposits, since it never pays any income.) The US government has also taken on too much debt in order to rescue private banking, and the increase in US money supply will probably weigh on the Dollar. 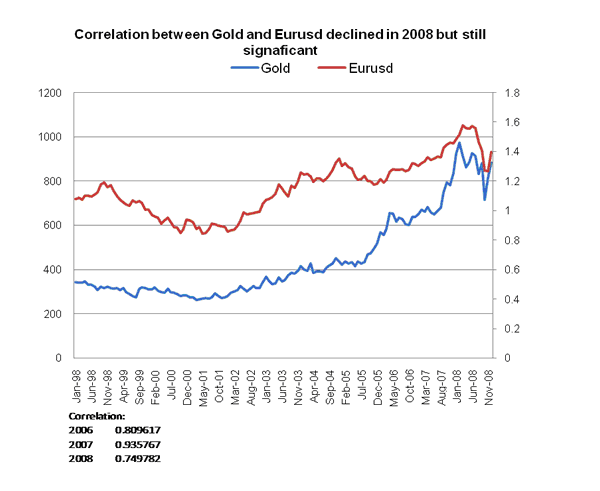 According to Merrill Lynch, "the weaker Dollar could then help gold break through $1,200 an ounce." Goldman Sachs expects that the standard drivers of currency movements – including interest-rate differentials and current account balances – will both prove Dollar-negative, which will once again dominate demand for gold.

Turning from Gold in 2009 to silver, however, the outlook is rather mixed due to the cheaper metal's dual properties as both a precious and an industrial metal. Over the long run, silver should track gold's performance, trading inversely with the US Dollar's performance on the forex market. But the global economic downturn has greatly pressured fabrication demand for silver, and physical demand will unlikely support the silver price in 2009.

The fact that safe-haven demand pushed the ratio of gold-to-silver-prices up to its highest level since 1995 indicates that silver's precious metal status was ignored. Whether the gold/silver ratio can be narrowed depends on the investment demand in silver "whether investors view it as a good hedge against weakness in major currencies."

The same problems affecting silver also apply to platinum commodity demand in 2009, too. Massive shutdowns in auto factories worldwide will greatly affect the prospects for the platinum price, since more than 60% of platinum supplies are used in auto catalysts.

Although supply growth is slowing down, it's still expected to record a year-on-year increase in 2009. This, accompanied with shrinking demand, will result in a material surplus – and the platinum price could remain weak until the global economic environment improves.

OilnGold.com aims to provide active traders with timely information and precise analysis on the commodity markets. Its pages include professional trader comments on both fundamental news digests and technical analysis of the commodity futures markets, plus a proprietary model to determine the "bias" of commodity futures towards the primary price direction.