END_OF_DOCUMENT_TOKEN_TO_BE_REPLACED

WHAT WAS once the world's largest commodities hedge fund is officially closing, writes Frank Holmes at US Global Investors.

That creates new opportunities for some investors to get exposure to raw materials and mining using other funds.

According to Bloomberg, Blenheim Capital Management's CEO and chief investment officer, Willem Kooyker, is calling it quits after a 50-year money management career that made him a legend in oil, metals and agricultural markets.

At its peak, Blenheim Capital oversaw as much as $9 billion in assets. That was in 2011, when China's economy first started to cool after years of double-digit annual growth.

Even though China still represents a significant share of world commodities demand, nervous investors fled the Blenheim fund, whose assets under management fell to $1.5 billion by 2016.

Says Bloomberg's Eddie van der Walt, the fund's closure "may signal a turnaround is due" in commodities and raw materials.

I also believe Kooyker's decision could mark a bottom in asset prices. The reason I say this is we saw something similar happen last year in the gold mining industry.

In July 2018, Vanguard announced that it would be closing its $2.3 billion Precious Metals and Mining Fund in response to unfavorable market forces. Many analysts took this as a sign that gold was oversold and ready to reverse course. And as if on cue, gold prices began to tick up following Vanguard's announcement, eventually hitting a six-year high of around $1566 an ounce in September 2019.

In the 12-months through September 30, the yellow metal gained some 20%. Gold mining stocks, as measured by the NYSE Arca Gold Miners Index, fared even better, returning an incredible 45% over the same period.

Granted, past performance does not guarantee future results. But I'm a contrarian, and when I see an asset class become so unloved that funds begin to close – whether it's Vanguard's or Blenheim's – then I believe it could be time to consider taking a position.

There are additional indicators that commodities and raw materials are undervalued right now. Below is an update of a chart I've shared before, showing the historical ratio between commodities, as measured by the S&P GSCI (formerly the Goldman Sachs Commodity Index), and the S&P 500 Index. 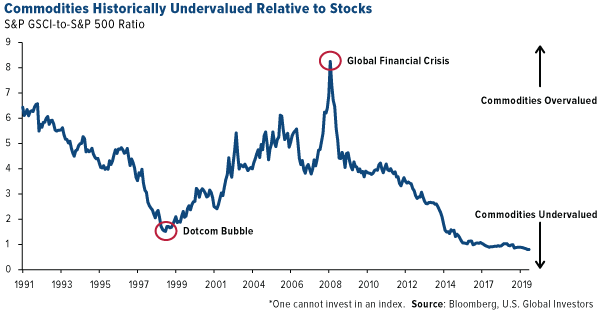 So as you can see, materials are the most undervalued they've been going back to 1991, when the S&P GSCI of 24 commodities was launched.

Again, past performance is no guarantee of future results, but had you bought a basket of commodities at the low during the dotcom bubble and held it until soon before the financial crisis a decade ago, the profits would have helped offset the losses in your equity position.

Also putting pressure on raw materials right now is a global manufacturing industry that's in contraction due in large part to trade tensions. Factories pulled back for the fifth straight month in September, which has hurt demand for important metals such as copper. 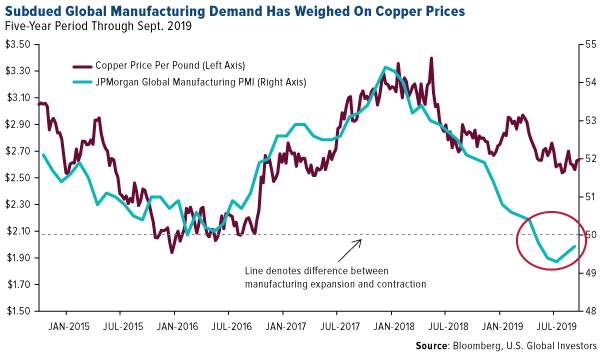 The good news is that there are reports of progress being made with regard to trade negotiations between the U.S. and China, the world's number one and number two economies. My hope is that the grievances on either can be resolved sooner rather than later so that factory activity can begin to recover and, with it, asset prices.

What all of this means is that now could be an excellent time to pick up exposure to commodities and raw materials – oil, natural gas, industrial and precious metals, chemicals, paper and forest products and much more.