END_OF_DOCUMENT_TOKEN_TO_BE_REPLACED

Not just gold benefits from a sliding greenback...

Ray Dalio, founder of Bridgewater Associates, the largest hedge fund in the world, said it was time for investors to put between 5 and 10% of their portfolio in gold as a precaution against global and domestic geopolitical risks. The threat of nuclear war is at the top of everyone's mind, but Dalio reminds us that our indecisive Congress could very well fail to agree on raising the debt ceiling next month, meaning a "good" government shutdown, as Trump once put it, would follow.

Dalio's not the only one recommending gold right now. Speaking to CNBC, commodities expert Dennis Gartman, editor and publisher of the widely-read Gartman Letter, said that he believed "gold is about to break out on the upside strongly" in response to geopolitical risks and inflationary pressures. Gartman thinks investors should have between 10 and 15% of their portfolio in gold.

Looking to September, government shutdowns haven't always been harmful to the stock market – during the last one, in October 2013, stocks actually gained about 3% – but I agree that it might be prudent right now for investors to de-risk and ensure their portfolios include safe haven assets such as gold and municipal bonds. Dalio and Gartman's allocation percentages mirror my own. For years, I've recommended a 10% weighting in gold, with 5% in bullion and 5% in high-quality gold stocks, mutual funds and ETFs. 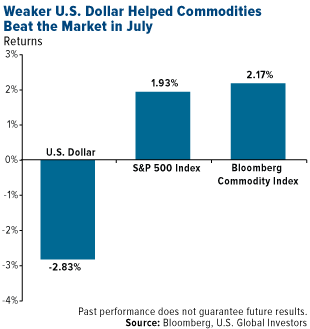 The US Dollar's continued slide lent support not just to gold but also commodities, specifically industrial metals. The Bloomberg Commodity Index actually beat the market in July, the first time it's done so this year.

If we look at the index's constituents, we find that six metals – aluminum, copper, zinc, gold, silver and nickel – have been the top drivers of performance this year, thanks to a weaker Dollar, China's commitment to rein in oversupply and heightened demand. According to Bloomberg, an index of these six raw metals has jumped to its highest in more than two years.

Some market observers believe this is only the beginning. Guy Wolf, an analyst with Marex Spectron Group, told Bloomberg that he doesn't "see anything" to make him doubt the firm's belief that metals "are now in a bull market."

"As people start to realize that the reasons for prices going up are robust and sustainable, that's going to bring more money into the market," Wolf added.

This bullish sentiment is shared by Mike McGlone, senior commodities analyst with Bloomberg Intelligence, who writes that commodities' strong performance in July "could be the beginning of a trend."

"Supported by demand exceeding supply, on the back of multiple years of declining prices, a peaking Dollar should mark an inflection point for sustained commodity recovery," McGlone says.

I can't say whether we might eventually see the highs of the commodities supercycle in the 2000s, but this news is certainly constructive. The top performer right now is aluminum, up more than 20% year-to-date. Last week it breached $2000 a tonne for the first time since December 2014 and is currently trading strongly above its 50-day and 200-day moving averages. 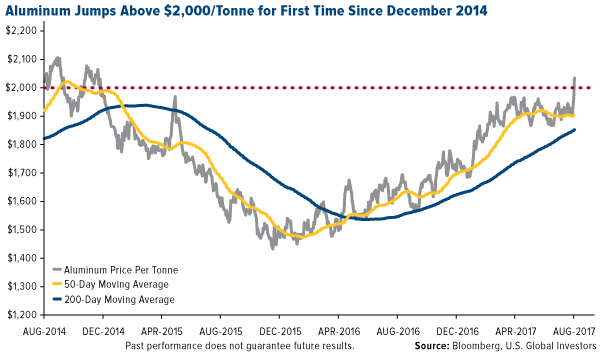 Demand for aluminum is growing in the automotive and packaging industries, its two key markets. With consumers and governments demanding better fuel efficiency, automakers are increasingly turning to aluminum, which is around 40% lighter than steel.

According to Ducker Worldwide, a market research firm, the amount of aluminum used to build each new vehicle will double between the early 2010s and 2025, eventually reaching 500 pounds. That's up from only 100 pounds per vehicle, which was the case in the 1970s. Airline manufacturers such as Boeing and Airbus are also expected to increase demand for the lightweight metal.

Supply-side conditions are also improving. Prices have struggled in recent years as China – which accounts for roughly 40% of world output – flooded the market with cheap, and often illegal, metal. Recently, however, the Asian giant has called for dramatic capacity cuts in a number of provinces. By the end of 2017, an estimated 4 million metric tons of capacity will have closed, or one-tenth of the country's total annual output, according to MetalMiner.

Also supporting prices is the Commerce Department's decision last week to slap duties on aluminum coming into the US from a number of Chinese producers that were found to be heavily subsidized by the Chinese government.

The Virginia-based Aluminum Association applauded the decision, saying that its members "are very pleased with the Commerce Department's finding and we greatly appreciate Secretary [Wilbur] Ross's leadership in enforcing US trade laws to combat unfair practices."

The aluminum industry, the trade group says, supports more than 20,000 American jobs, both directly and indirectly, and accounts for $6.8 billion in economic activity.

There's perhaps no greater signal of a shift in sentiment than an increase in mining activity as producers take advantage of higher prices. Bloomberg reported last week that the number of new holes drilled around the globe has accelerated for five straight quarters as of June. What's more, drilling activity so far this quarter, as of August 7, suggests that number could extend to six quarters.

I believe activity will only continue to expand as China pursues further large infrastructure projects, which will require even more raw materials such as aluminum, copper, zinc and other base metals. And I still have confidence that Trump and Congress can deliver on a grand infrastructure deal – the president has been turning up the heat on Senate Majority Leader Mitch McConnell, writing on Twitter that the Kentucky senator needs to "get back to work" and put "a great Infrastructure Bill on my desk for signing."

With government spending on infrastructure falling to a record low of 1.4% of GDP in the second quarter, such a bill would help modernize our nation's roads, bridges, waterways and more. It would also serve as a huge bipartisan win for Trump, which he sorely needs to build up his political capital.

But beyond that, a $1 trillion infrastructure deal would greatly boost demand for metals and other raw materials, perhaps ushering in a new commodities supercycle.