END_OF_DOCUMENT_TOKEN_TO_BE_REPLACED

How China's push for solar energy could soon impact silver investing prices...
LAST MONTH, writes Jeff Clark at Casey Research, big news for silver investing came out of China.
It may have gone unnoticed by some investors – and there's really no reason why it would have been covered extensively by mainstream media – but it's important if you're investing in silver.
China raised its target for solar generating capacity to more than 35 gigawatts (GW) by 2015, a stunning increase of 67% above the previous target. China's State Council announced on July 4 that installed capacity for solar electricity would grow about 10 GW per year until it reaches this newly set target.
The country's previous target was 21 GW; installed capacity in 2012 was about 7 GW, so this solar investing push would translate into a 400% increase. Moreover, if one looks at the rate at which it keeps raising the target, we may well see even more solar capacity by 2015 – and quite possibly two times that by 2020.
Why does this mean to anyone investing in silver? A simple answer would be that growing demand could crimp supply and push on silver prices. But let's take a deeper look to see if that's the case...
The backbone of the solar industry is photovoltaic (PV) technology, which is used to generate electrical power by converting solar radiation into direct-current electricity through the use of semiconductors. As you probably know, a typical photovoltaic solar panel uses a fair amount of silver – the fabricator has to buy silver, roughly two-thirds of an ounce (20 grams), or about the same amount as 80 cellphones or 20 laptops, for each panel. So a substantial amount of metal goes toward producing these technological wonders.
The photovoltaic industry didn't even start to show up on silver-demand charts until the year 2000, when it consumed roughly 1 million ounces of the metal. This was a miniscule slice of the demand pie, and it's fair to say that few investors saw this tiny use for silver becoming an important driver anytime soon.
But that had changed by 2008, when the solar industry consumed nearly 19 million ounces of silver. Since 2000, the amount of silver used by solar-panel makers has risen by an average of nearly 50% per year, with demand exceeding 47 million ounces in 2012. Put investing aside, and PV consumption now represents 5.6% of all industrial use of silver. 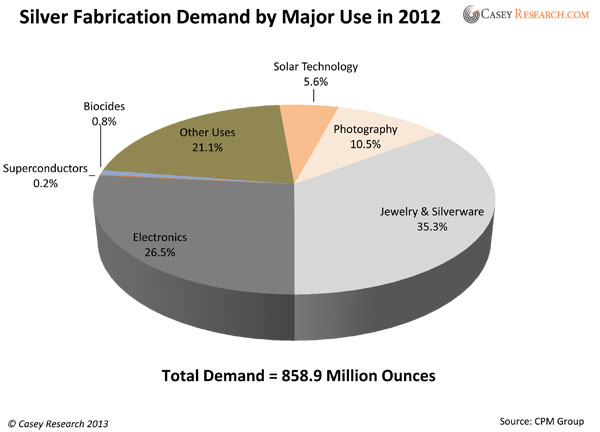 The largest end user of solar panels in 2012 was Germany, but that's changing. In fact, a number of major European governments have reduced subsidies for solar panel installations, pushing photovoltaic silver demand down 12%. This was the first time demand from the sector declined since 2000. 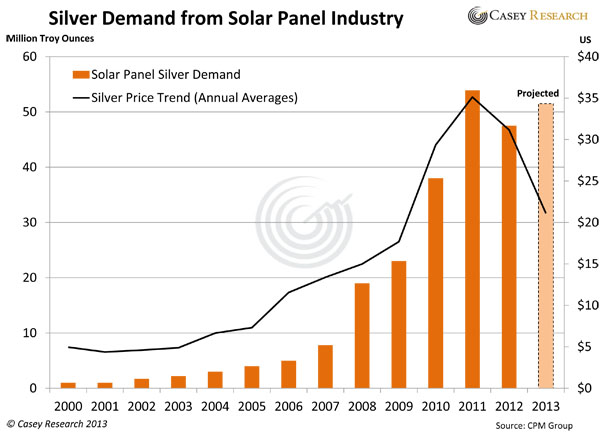 But the future of PV demand doesn't rely on Europe; more important are the emerging giants in the East. In addition to China, India plans to invest and increase its solar output to 20 GW by 2020, starting essentially from the scratch. On a worldwide basis, solar power generating capacity is projected to be 20 to 40 times the amount of current capacity by 2020.
China is a principal solar panel manufacturer and exporter, supplying 53.6% of global silver PV demand in 2012. While this demand declined 14.2% last year due to fewer solar panel installations in Europe and oversupply from excess production, the future for Chinese photovoltaic demand looks anything but bleak. 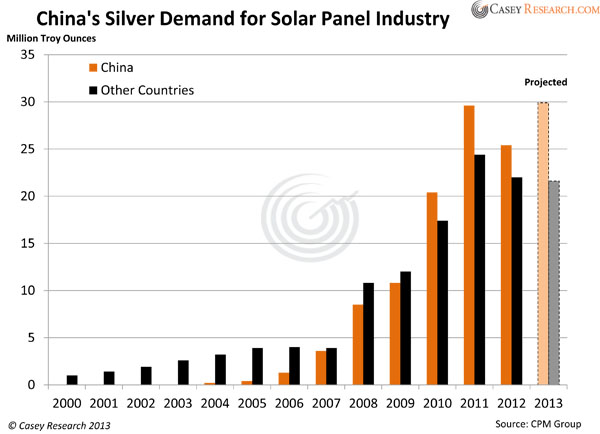 Again, according to the rules released by the State Council, China should add an average 10 GW of capacity from 2013 through 2015 – that's a pretty solid basis for expecting growth in the sector.
A potential glitch is the European Union recently slapping an 11.8% duty on Chinese exporters of solar panels, after accusing them of selling products below cost. This issue appears to have just been resolved, but Chinese authorities have also said they will offer tax breaks to solar companies that expand and reorganize their operations, as well as urging banks to lend to the producers. Many in China hope that this will reenergize its solar industry and effectively reduce its dependence on the need for exports.
What does this mean for silver investing? It's estimated that over 50 million ounces of silver will be devoted to just the solar industry this year. China's proposed boost from 7 to 35 GW in capacity would translate into a global increase of 27%, from 102.2 GW last year to 130.2 GW in 2015. Meanwhile, Japan is expected to overtake Germany as the world's largest solar energy user. An estimated 5.3 GW of generation capacity – the equivalent of five nuclear reactors – will be added this year, according to a report from HIS Inc., a US-based research firm.
All this extra capacity could have a significant impact on the silver market. According to the Silver Institute, approximately 80 tonnes of silver are required to generate one GW of electricity. With 5.3 GW of new capacity in Japan in 2013 and 30 GW from China, a staggering 2,824 tonnes, or roughly 91 million ounces of silver, will be required over the next three years for just this industry. This amount is nearly two times current worldwide demand from the PV industry. Demand from China and Japan alone could consume up to 11% of global mine supply.
And that's if the world continues to produce as much silver as it did last year, a questionable assumption given currently lower silver prices and increasing difficulties getting mines permitted.