END_OF_DOCUMENT_TOKEN_TO_BE_REPLACED

DOES CHINA have a property bubble? If so, is it about to deflate? These are matters of debate. But the People's Bank of China (PBOC) is sure worried about inflation. The PBOC again raised reserve requirements at Chinese banks this week. The wrinkle this time is that margin deposits are included in its requirements, writes Dan Denning, editor of the Daily Reckoning Australia.

This is the off-balance sheet or "shadow banking" problem. Beijing's central planners are trying to stamp out off-balance-sheet lending and credit creation. They are trying with all their regulatory might to rein in house prices and cool consumer price inflation. Reserve requirements – the amount banks must hold back in its vaults as a percentage of deposits – are at 21.5% for China's big banks.

UBS economist, Tao Wang told the Financial Times that this latest move is, "A signal that the government intends to deal with the recent rapid growth in off-balance sheet activity, which has complicated and compromised the liquidity management of the central bank." In other words, banks are finding a way around the rules restricting credit growth. 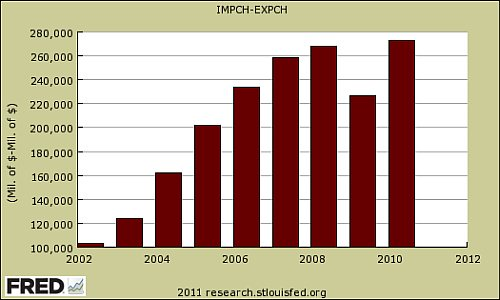 This is where the uncontrollable trouble begins for the PBOC. A trade surplus generates a stream of Dollars headed back to China. To prevent those Dollars from creating massive inflation, the PBOC buys them up from Chinese. Those businesses, and Chinese investors, are forbidden to invest those US Dollars overseas. They don't mind selling. But to buy the incoming trade surplus Dollars, the PBOC must create more of its local currency, renminbi.

As you can imagine, the larger the trade surplus, the more renminbi the PBOC must create. This quite literally expands China's money supply. That wasn't a problem when China's economy was growing double digits, year over year. The new money found its way into capital investment. It did not generate inflation. But it's a problem now.

In order to prevent newly created renminbi from expanding the money supply and causing inflation, the PBOC "sterilises" the money. It does this by issuing renminbi bonds, which banks must buy. The banks get the bonds. The PBOC removes the renminbi from circulation. Inflation problem solved.

Only the problem isn't solved. Chinese banks are finding ways to create credit outside official channels. Banks are loaning to local government financing vehicles (LGFVs) for elaborate and extravagant property development projects. Many of these projects will not generate sufficient cash flow to repay the loans, we reckon.

So China has come to a structural crossroads. It's accumulated massive foreign currency reserves via its trade policy, over US$3 trillion. It's created more renminbi than it can effectively sterilise by issuing bonds. Asset price inflation is the result.

We'll leave off with the mechanics of the currency management and bring it back to the big picture. In the big picture, China is likely to manage its inflation problem by allowing its currency to appreciate. This is what would happen naturally if the PBOC didn't intervene.

In the meantime, it means that China may be at the tail-end of some of the big structural advantages it's enjoyed over the last 20 years. The currency will rise relative to its global peers. The trade surpluses will fall. Wages will rise. All of which could challenge China's manufacturing dominance globally.

This would be good news for Australia. Australia is currently in the grip of the realization that its manufacturing base could be annihilated by the course of globalization, unless that course shifts. The charts below from the US Bureau of Labor Statistics show what happened to the structure of America's labor force, especially since 1978 when Deng Xiaoping's "Socialism with Chinese Characteristics" led to economic reform and double-digit GDP growth in China: 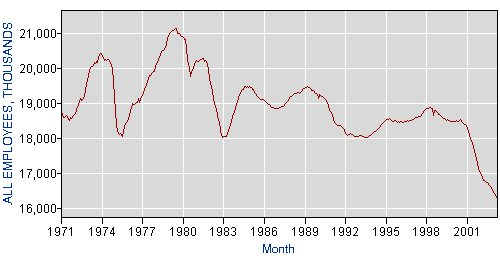 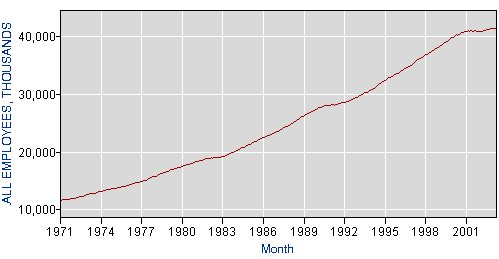 The permanently unemployed, 6.1 million jobless for more than 27 weeks 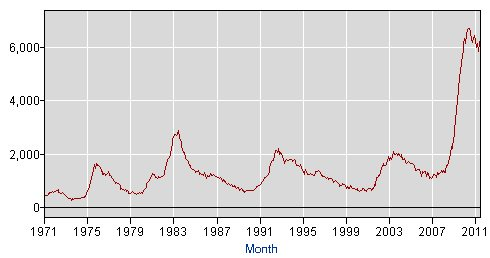 The three charts from the BLS show the decline in manufacturing jobs since 1978, the increase in service sector jobs, and the spike in the long-term unemployed in America as a result of the GFC. These three charts show the structural impact of China's emergence on America, and, to some extent, on the whole industrialized Western world.

Over five million manufacturing jobs have disappeared from America in the last 30 years. But over 30 million lower-wage service industry jobs have been handed out. GM fell. Wal-Mart rose. This fundamentally changed the character of the American economy, and probably of American society.

The solution, of course, is not to borrow more money and give it to people to spend. That is not real wealth creation. It is just money shuffling. The solution is creating wealth by producing things of value that people want to buy. This does not include CDOs, RMBS, and synthetic ETFs.

Easier said than done, though. It's hard to compete when there are two billion new people entering the global work force. This creates global wage deflation. Wage deflation coupled with declining GDP and Welfare State promises is a recipe for a structural crisis in Western economies. This is precisely what we have.

Looking to protect your wealth by Buying Gold? Cut your costs and boost your security by using BullionVault...