END_OF_DOCUMENT_TOKEN_TO_BE_REPLACED

Gold is being weighed down by a weaker Euro. Whereas China's economy...

LAST YEAR China made great contributions to the world economy, writes Gary Dorsch at Global Money Trends, as it was the first country to recover from the international financial crisis.

As a result of its 4 trillion Yuan stimulus spending, China's debt-to-GDP ratio is expected to reach 31% this year, far less than the average government debt of OECD countries, which is projected to almost equal their total GDP this year, and exceed it in 2011.

In sharp contrast to the sound finances of China, backed by $2.4 trillion of foreign currency reserves, the newly elected government of Greece's socialist Prime Minister George Papandreou faces massive pressure to get its fiscal house in order. Among the 16 nations within the Eurozone struggling to cope with their budgetary imbalances, Greece faces the most difficult situation.

With a budget deficit of 12.7% of GDP this year, and debt outstanding of €300 billion, Greece's debt-to-GDP ratio is expected to top 120%. In the short term, Greece needs to borrow €53 billion before year's end to refinance debt which is about to mature. 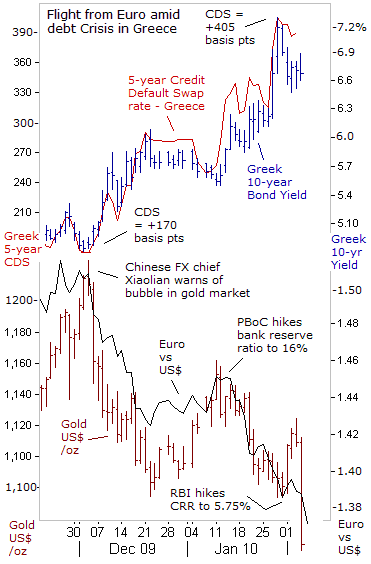 Over the course of the past two-months, the interest rate that Greece must pay in order to attract foreign capital for 10 years has risen by 175-basis points to 6.75% today.

Amid growing doubts that Athens can repay its debt, the cost of insuring €10 million of Greek government bonds against default for five-years has soared to €370,000. That puts Greece among the top-four countries in the world that are most likely to default, behind Argentina, Ukraine, and Dubai.

On Jan 29th, Greek Prime Minister George Papandreou complained that his country was being targeted as a weak link, by speculators with ulterior motives, and seeking to profit handsomely from the possible break-up of the single European currency. Already, amid the capital flight from Greek bonds, there's been a simultaneous exodus fleeing the Euro currency, knocking it below the psychological $1.400 area, from around $1.500 just two months ago.

In an ironic twist, the "flight for safety" from the Greek bond market, isn't finding a "safe haven" in the gold market. Instead, the Gold Price is enduring selling pressure, undermined by the weakening Euro.

The US Dollar is getting stronger by default, largely due to the unwinding of "carry trades" in global stock markets. Furthermore, spike rallies in the Gold Price could meet resistance, as it becomes increasingly apparent that China and India are still on course for further tightening of their money supply in the months ahead.

Also, G20 central banks allowed their foreign currency swap agreements to expire as of Feb 1st, eliminating a huge source of global liquidity, which at its peak reached $586 billion. 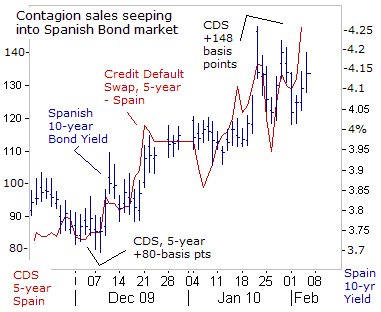 In the event that Greece defaults on its loans, or if its interest rates climb too high, it could prompt a chain reaction for other weak links in Eurozone bond markets, with devastating consequences for the entire Euro currency system.

The most vulnerable to capital flight is Spain, where the jobless rate hit 18.8% in the fourth quarter of 2009 and the government said it could reach 20% this year.

Already, contagion sales from the troubled Greek bond market are starting to seep into the Spanish bond market. The credit default swap rate to insure €10 million of Spanish bonds has nearly doubled to €148,000 and yields have climbed 40-basis points higher to 4.15% over the past two months.

Spain expects a fiscal deficit of 9.8% of gross domestic product in 2010, but said its ratio of public debt to GDP should peak at 74% of GDP in 2012, well below Greek levels. Still, capital flight from the weakest links in the Eurozone bond markets is triggering the unwinding of US-Dollar and Japanese Yen carry trades, which in turn, is rattling global commodity and stock markets, and precious metals.

While it's true that the January Barometer was far off the mark in 2009, one also should remember that it's been accurate for 90% of the time over the past 60 years. And falling global stock markets last month thus point to a poor outlook for 2010. Much will depend, however, on the degree to which the G20 central banks drain the global liquidity swamp, which led that the emergence of asset bubbles in 2009.

How best to Buy Gold today? Get off risk, and cut out the middleman, accessing the safest gold at the lowest prices using BullionVault...