END_OF_DOCUMENT_TOKEN_TO_BE_REPLACED

What jewelry-selling Western consumers have discovered about China's gold buying...

Compared to household savings, in fact, revised forecasts here at BullionVault this morning put likely gold purchases in 2010 at the equivalent of almost 1.7% – over twice the level of five years ago. 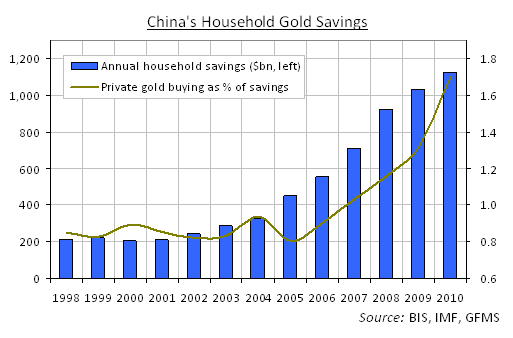 This confounds Western analysts who foresaw substitution – from gold jewelry to consumer gadgets – as China's household wealth grew. Because gold demand, even for the kitschest gold kitten, remains an expression of saving, not spending.

That might jar with Western tastes and ideas. But it's clear in the numbers.

According to Peking professor Michael Pettis – and despite disposable income growth of perhaps 15% annually since 2000 – consumption growth in the world's No.2 (and fastest-growing) economy "is anemic" by comparison. A BIS study last month suggested it's because household earnings are falling as a proportion of national income. But either way, and in contrast with consumption spending, private Chinese gold demand has risen 26% annually by volume in the last decade, drawing a still-greater share of retained wealth as domestic Gold Prices rose near three-fold.

So where Western analysts divide "jewelry" from "investment" demand, Chinese gold buying – as in India, the world's No.1 market (for now) – cannot be so easily split. Gold's form doesn't define its purpose so tightly in China, as North American and European gold sellers have rediscovered since the financial crisis began.

Swapping gold-for-cash by ditching unwanted jewelry, the Western world's new "scrap gold" sources are simply finding in gold a value they'd forgotten was there. Stored wealth in whatever shape is still wealth. The trick, of course – and as China's fast-growing "investment products" demand now shows – lies in reducing your transaction costs both on purchase and sale.