END_OF_DOCUMENT_TOKEN_TO_BE_REPLACED

Water shortages have forced China to raise its food imports...

China already buys most of Argentina's soybean exports. And now China's largest farming company is trying to lock down acreage for more soybeans. It also unveiled a plan to grow wheat, corn, vegetables, fruit and even wine – all for export to China.

The moves in Argentina mirror China's efforts in other parts of the world to secure food supplies. The simple reason is that China is having more and more problems producing the foodstuffs it needs at home.

The biggest challenge may be finding sources of water.

For months, south and central China have been suffering from drought. In the spring, Beijing sent deep well-drilling teams from all over the country to these parched provinces. The aquifers these regions relied on were dry. They needed to drill deeper. This required more specialized equipment. Hence, Beijing's order.

Unfortunately, drilling deeper wells is only a short-term fix. Deep-underground aquifers can take hundreds of years to replenish. Tapping these wells is merely a kind of advance on the future. You have to pay it back later when you can't tap the water anymore.

This is the idea, too, behind "water-based food bubbles." You tap a nonrenewable water supply that gives you the boost you need to grow food, but as with a financial bubble, it is bound to pop. Then, food production collapses.

Droughts come and go, but they have been more severe in China in recent years. The drought in Shandong was the worst in 200 years. Drought lingered in Sichuan province a few years ago, and it was the worst in a century. And last year, a drought in northern China hurt the corn harvest (and made China a net buyer of corn abroad for the first time).

Drought has also hit areas not normally associated with drought. The Asia News Network reported that through May, rainfall in Taiwan was down 35% compared with the average in the past 30 years.

In the western part of the island, rainfall was down 90% in April and May. Taiwan is normally a relatively wet island and good for growing things. Before it became a mini-Japan, Taiwan was a large exporter of oranges, bananas, asparagus and mushrooms. The foundation of its economy was agriculture.

China's southern and central provinces are normally wetter. Hubei, in the central part of the country, is known as the "land of a thousand lakes" – hundreds of which are now "dead," meaning you cannot extract water from them. In fact, drought had reduced China's largest freshwater lake, in Jiangxi, by 80%.

The irony of all this is that earlier this month, the skies opened up over China. Now they have too much rain. As The Wall Street Journal reports:

The flooding, triggered by heavy rains that started early this month, has caused widespread suffering in more than a dozen provinces and regions, with state media calling it the worst in decades in some areas. In addition to the 175 known deaths, 86 people are missing and some 1.6 million people have been displaced by the flooding, which has caused more than $5 billion in damage as of Monday.

It has also caused extensive crop damage. Production of grains, fruits and vegetables has fallen by more than 20%. Food prices are soaring. Hundreds of thousands of acres of crops have been destroyed.

We may speculate why China's weather has been more severe in recent years. But one thing is undeniable, and it takes us back to the story I led off with: China will need to buy more of its food abroad. By importing food, it essentially ups its water needs as well.

Of all the things China demands, food and water would seem to be among the most important and most resilient. I think a recession in China would hurt demand for food. People would not eat as well. They would likely eat less meat. Less meat means fewer grains for livestock. So grain prices are vulnerable to recessions too, just as are oil and copper.

But volumes are fairly steady over time. If you look at long-term grain production, you would see a steady chart moving upward over time. Recessions barely make a dent in the long-term trend. While prices may have swung wildly from time to time, production has marched steadily upwards.

More recently, you can look at production and see an inexorable increase over time. You can also see persistent shortfalls relative to consumption: 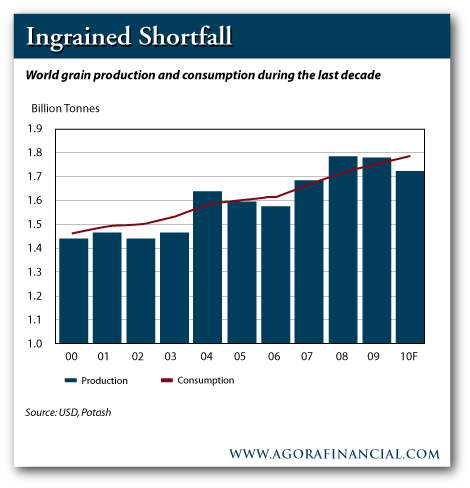 This is partly why inventory levels have been tight and prices have stayed high.