END_OF_DOCUMENT_TOKEN_TO_BE_REPLACED

Despite its 'good news' GDP figures, China could still be affected by the Euro crisis...

THE END of next month will see another longer term refinancing operation from the European Central Bank. Rumor also has it the Greeks will default on March 20th. And of course, the market would have fully priced all that in already, right? says Dan Denning in the Daily Reckoning Australia.

Or maybe not. We suspect news events may have something to do with the price action this week. It's not because the news is really new. It's because most investors (or people who buy stocks) have become incredibly reactive in the era of Quantitative Easing. One day it's "buy buy buy!" And another it's "sell sell sell!" The long-term big picture view is ignored.

In any event, there is good news everyone! China's economy grew at 8.9% in the fourth quarter. Granted, that growth rate was down from 9.1% in the third quarter. But it seems like a lot of growth for an economy of 1.2 billion people. And it's certainly a lot more growth than, say, in Europe, Japan, or America.

You can never be sure about any of these figures from state-managed economies, and we'd include the United States in that category. But taken at face value, the GDP figures might give China's central bankers leeway to cut interest rates, relax reserve requirements and banks, and generally loosen the reins on credit growth to pep things up a bit.

Mind you, China is one of the peppiest places in the world. Even though the fourth quarter GDP figures were the slowest in two years, China has passed a historical milestone of sorts. Its urban population is now larger than its rural population for the first time in history. The great migration from the farm to the factory has altered the physical structure of China's living arrangement.

According to the Financial Times...

'The historic population milestone, reached by UK and US in 1851 and 1920 respectively, was marked by a single sentence buried in a government press release on the country's quarterly economic performance. According to the figures, 51.27 per cent of China's population, or 691m people, were living in urban areas by the end of last year, up from 49.95 per cent at the end of 2010.'

If China's internal migration is analogous to the industrialization of the US and British economies in the 19th and 20th century, then the migration could arguably unleash "domestic demand". Factory workers probably make more money than a farmer. And if they make more money, they'll probably spend more money.

You wouldn't guess any of that by looking at the chart below, though. The Reuters/Jefferies CRB Index has been making lower highs and lower lows since April of 2011. You can see it's bounced off the 292 level (or thereabouts) four times since October of 2010. It's at 310 now. So what would a move to 292 and a break below that level tell you? 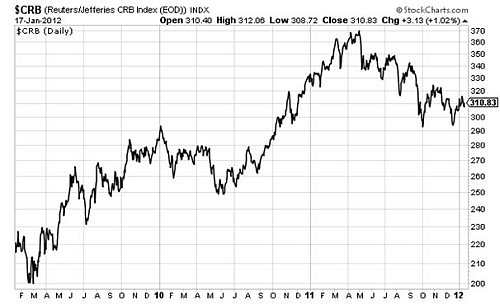 The obvious answer to the question above is that a move below 292 tells you commodities are weakening. This would be consistent with less-than-expected growth in China. And it would be consistent with the fear that Europe will blow up this year and that China may be the unintended victim via its exposure to European debt (and not just European demand for Chinese exports).

The obvious answer isn't always the right one, though. The non-obvious answer is that the CRB is showing US Dollar strength. Or, more to the point, the looming €1 trillion LTRO planned by the ECB is driving the Euro down relative to all other currencies. Since commodities are priced in US Dollars, Dollar strength puts a cap on commodity prices (absent supply and demand pressures).

It's all a bit confusing. Such is the nature of a fiat money system in which no values are fixed and everything is relative. The resulting swings in prices have less to do with the intrinsic worth of assets or goods and services...and more to do with a global game of "beggar thy neighbor", in which countries use currency debasement as a weapon in the economic war to compete.

Some in Europe believe that S&P's downgrading of sovereign European credit ratings was a part of America's "war against the Euro". The Americans are trying to discredit the Euro in order to perpetuate Dollar hegemony, so goes the argument. Hmm.

It's possible. It's also possible that all central bankers and monetary policy makers are singing from the same hymnal. Their answer to the end of the credit bubble is to try and pump it back up with currency debasement. In that case, this is a war of all against all.

How do you survive a war of all against all? Well the best answer is not to play. And the best way not to play is to own forms of wealth that are useful, tangible, durable, and valuable no matter what currency they're denominated in. Can you think of anything that fits that description?

Get investment grade Gold Bullion at the lowest possible price with BullionVault...