END_OF_DOCUMENT_TOKEN_TO_BE_REPLACED

You can't reinflate the same bubble...

THE MAINSTREAM PRESS continues to get it wrong about China's economy, reckons Greg Canavan in the Daily Reckoning Australia.

This is the argument: a falling inflation rate in China allows the authorities to ease monetary policy to avert a hard landing. Or, as today's Financial Review puts it:

China's government has been given room to ease credit policy further to bolster growth in the world's second largest economy after inflation fell to a yearly pace of 4.1 per cent in December.

The fall in the consumer price index from 4.2 per cent in November, down from a 37-month high of 6.5 per cent in July, is likely to increase Beijing's confidence that inflationary pressures are being brought under control while policymakers look to provide additional support to the economy as export demand slows and the housing market turns down.

This simplistic view fails to take into account complex monetary mechanisms of China's economy. Firstly, China pegs its currency, the Yuan, to the US Dollar. And because China's economy runs a trade surplus with the US, it ends up with excess US Dollars. To maintain the peg and stop the Yuan from appreciating, the People's Bank of China (PBoC) must print Yuan to buy these excess Dollars.

So, the build up in FX reserves matches the build-up in the reserves of the domestic banking system. The more reserves a bank has, the greater its lending power.

This is inflationary. And when the government encourages its banks to lend without discrimination, you tend to get things like property bubbles forming. In an attempt to offset this wildly inflationary impact, the PBoC raised reserve requirements.

But here's the point. Placing a higher reserve requirement on the banks was not an example of monetary policy 'tightening'. It was merely a way to try and neutralise the impact of an expanding FX account.

Recently, the PBoC began to lower the reserve requirement. According to most analysts, this represents an easing of monetary policy. But we disagree.

Let us explain why...

China's huge FX reserves are no longer growing. In fact, they are widely tipped to have contracted in the final quarter of 2011. Sensing the party is over, speculative money is quietly flowing back out of China's economy. As FX reserves fall, so do banking system reserves. Left unchecked, this represents monetary policy tightening. A lower reserve requirement merely offsets the effect of falling FX reserves.

That's all pretty technical. If you're still following, we've got a much simpler reason why looser credit policies won't work in China – a lack of demand. Banks can supply all the credit they want. But unless there's a willing borrower, it's useless. Ask Ben Bernanke.

When a bubble bursts, as the property market in China has, the effect is financial and psychological. The emotion of greed (which fuels demand for credit) wanes. Fear (which restricts the flow of credit) takes over.

China's policy makers will now attempt to do what just about every policymaker since the South Sea bubble has done – reinflate. But as history has shown, you can't reinflate the same bubble. You just create others.

Where will China's next bubble appear? Hmmm...how about gold? 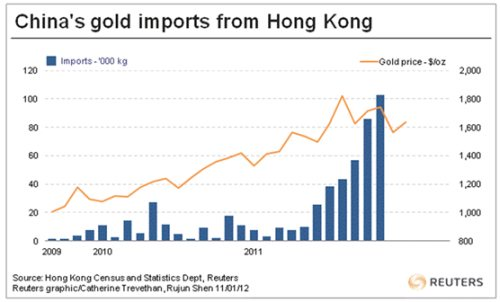 Are Chinese citizens trying to protect themselves from falling property and equity markets? With deposit rates less than the inflation rate, there's no respite by placing funds in the banks either. Gold seems like a sensible option.

And judging by the volume of imports, there's a good chance the PBoC is in there buying too.