END_OF_DOCUMENT_TOKEN_TO_BE_REPLACED

WELL THE whole world was pretty much down overnight, says Dan Denning in his Daily Reckoning Australia.

Blame China, if you must. Today's Financial Review reports that Chinese regulators are leaning on Chinese banks to quit lending for the rest of the month. It is probably not a request.

"The move to restrict lending is a sign the government is increasingly concerned about asset bubbles and worsening credit quality."

The concern is welcome, but probably a little too late. Chinese stocks and real estate have soared in the last year on the $1.5 trillion lending boom. Check out the chart below... 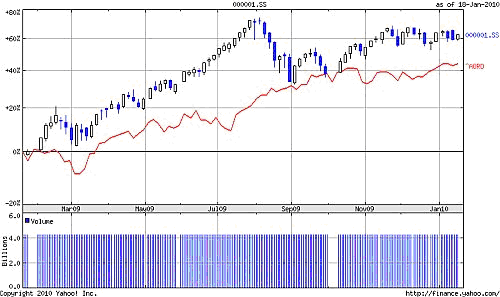 You can see that Shanghai's composite index – the candlestick graph at the top – was up nearly 78% from the March low to the August high. Since then, it looks fairly range bound.

Below it, the red line shows you Australia's All Ordinaries index – and that shows you how closely correlated Aussie stocks are to China's financial boom.

The main difference now is that Aussie stocks are just off a new high made early in the New Year. China flattened out long ago.

Yes, we freely admit here in St.Kilda, Melbourne, to knowing very little about China, other than what we read and what we think about in our own head. But the numbers – those published by the Beijing government – show a huge fixed-asset investment book building over the last ten years.

Whether that boom has become an unsustainable bubble is a good question. But the answer may not actually matter that much. The point of contention is whether China's resource-intensive phase of growth – the massive support beneath Australian commodity prices and resource stocks – is fully mature, or has years to go.

If it's fully mature, resource demand is going to be lower and probably stock prices too. We'll see about that.

The other global downer on the newswires comes from the US housing market. New housing starts fell by 4% in December and the index of homebuilder confidence fell too. But by far the more alarming news was that the Federal Housing Administration is increasing mortgage insurance premiums, demanding higher credit scores, and requiring larger down payments from new borrowers.

Don't worry. It's not like the FHA is getting too tight with taxpayer money. Mortgage insurance premiums are rising from 1.75% to 2.25% and the down payment required for a new loan is just 3.5%. It's hard to imagine these moves significantly improving the FHA's balance sheet.

But according to the agency's own figures, its share of the US mortgage market has gone from 3.7% four years ago to 30% in 2009. It was a key agent – along with Fannie and Freddie – in the nationalization of America's housing when the banking crisis struck. And while the US government is keeping the mortgage market afloat, the FHA's cash reserves have shrunk to 0.5% of loans outstanding, instead of the robust 2% required by an inept Congress.

All up, in short, it could be another very bad year for American housing. That would be bad for American banks, who still own a lot of housing collateral (and have carried it at what can only be described as "hopeful" valuations). And if banks are worried about further collateral destruction, they aren't going to be in any hurry to lend money into the economy.

Instead, look for them to borrow short-term from Uncle Sam and loan the money right back to him at a higher rate. This is the dynamic that fuelled bank and brokerage trading earnings last year. Falling house prices and a stagnant mortgage market set up 2010 for more of the same.

Want to Buy Gold but unsure how best to do it? Make gold simple, secure and cost-effective using BullionVault...