END_OF_DOCUMENT_TOKEN_TO_BE_REPLACED

That's the message the US government shared with the world, giving importers until November 4 to cut their consumption of Iran's crude to zero – or expect sanctions. The threat comes a month after President Donald Trump withdrew the US from the Obama-era nuclear deal.

West Texas Intermediate (WTI) responded by adding more than $6 to the price of a barrel last week alone, to end above $74.

Other drivers included supply disruptions in Canada and Libya, as well as a sharp, more-than-expected decline in US crude inventories. Nearly 10 million barrels were drawn in the week ended June 27, the most since September 2016. Crude is now up an eye-popping 70% from the same time last year, contributing to the inflationary pressure that's pushed consumer price growth to a six-year high.

And there could be more upside, should supply crunches continue along with Trump's ongoing geopolitical efforts to isolate Tehran. Ready to see $90-a-barrel oil? That's the forecast from Bank of America Merrill Lynch analyst Hootan Yazhari.

"We are in a very attractive oil price environment," Yazhari told CNBC this week, "and our house view is that oil will hit $90 by the end of the second quarter of next year," or 12 months from now.

Even if this prediction ends up overshooting the mark, I believe there could still be money to be made in the energy space on tightening supply and strong global demand. For more, I urge you to watch this brief video outlining the six factors that matter when picking energy stocks.

The US market is mere days from hitting a milestone that some investors might not have anticipated in the business-friendly era of Trump. Both the S&P 500 Index and Dow Jones Industrial Average have been stuck in correction mode since early February of this year, when inflation fears and concerns of a global trade war triggered a monster selloff.

Last week marked the 100th day both indices have been in correction, and according to MarketWatch, if they stay sideways another nine trading days, it will have become the longest such stretch since 1984.

Stocks managed to recover then, but as I see it, unless Trump softens his stance on trade, they will have a difficult time doing the same today. Stiff retaliatory barriers are scheduled to be raised by China, Canada and other key markets, and Canadian consumers have already started boycotting American-made goods. US exports of steel, soybeans and other products are down from a year ago because of friction over the tariffs, which are essentially regulations that could jeopardize the positive work Trump has done in cutting red tape in other areas.

Below is the Dow's performance so far this year, not including today, annotated with some key moments in the Trump trade war. I chose the Dow specifically because it includes the very largest US exporters, some of which do tens of billions of Dollars in sales in China alone. As the biggest US exporter, Boeing delivered more than 200 aircraft to the Asian country last year, accounting for a quarter of the plane maker's global sales. Apple generated around 20% of its revenue in China, or the equivalent of $44.7 billion. 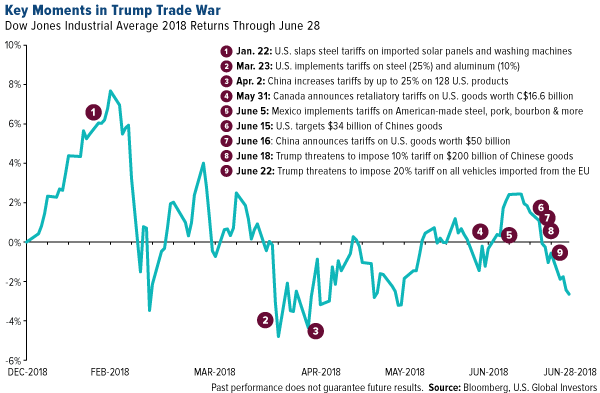 The question now is whether we're headed for a recession, and how investors can prepare – though I believe the market is oversold, as I explain in the most recent edition of Frank Talk Live. The last nine years have been extraordinarily profitable, but every bull market must come to an end – not from age, remember, but from changes in monetary or fiscal policy.

Trade war friction has strained international relations in other ways than just trade, of course. Among those is foreign direct investment (FDI), essential for global economic growth.

China's tech industry is exploding. Last year, gross output value of Chinese tech firms hit 20 trillion Yuan, or about $3 trillion, for the first time ever. Nine of the world's 20 biggest tech firms now call China home, beginning with Alibaba, valued at half a trillion Dollars. And for the past several years, China has filed far more patent applications than the US on an annual basis. (I should point out, though, that the US still has more patents overall, having just issued patent number 10 million.)

The Asian country, in fact, has more unicorns – or startups worth $1 billion or more – than any other nation on earth. Chinese unicorns account for more than half of the global total, and 66% in terms of valuation, according to the World Economic Forum (WEF).

Just look at the top 10 Chinese unicorns. Ant Financial, formerly known as Alipay, ranks first with a valuation of $145 billion. That's about twice the value of the number one US unicorn, Uber. 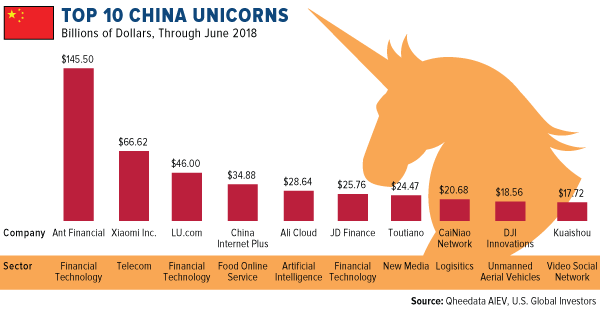 It's very likely even more capital will flow into these firms this year and next. That's because Chinese FDI in the US fell an incredible 92% in the first half of 2018, as the government cracks down on capital flight. The decline is also likely in response to the US government's increased scrutiny of Chinese acquisitions. 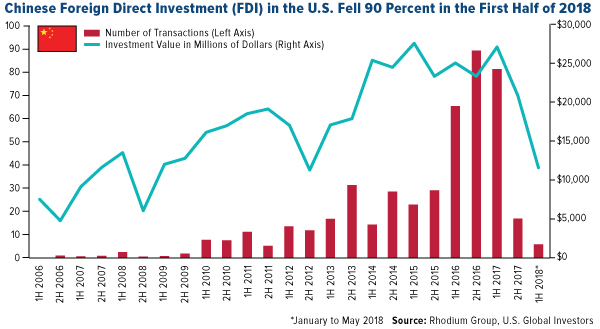 According to economic research firm Rhodium, Chinese investors have sold $9.6 billion worth of US assets, including office buildings in New York, San Francisco, Chicago and Los Angeles. That's after making only $1.8 billion in investments. What this means is that the country's net US FDI is negative $7.8 billion so far this year.
And regarding a possible rebound in Chinese investment activity, "looming US policies present substantial headwinds," writes Rhodium's director of research, Thilo Hanemann.

So where will all this capital go?

I don't think anyone can say for sure, but my guess is that this will be a huge windfall for the already fast expanding Chinese tech industry.

There are even more reasons to be optimistic about the Chinese tech industry, including the fact that only a little over half of the country's population is online. At 772 million people, the user base is massive – more than twice the size of the entire US population – but penetration is only 54.6%, according to UBS. That's well behind the U.K. (94.8%), Japan (93.3%) and the US (87.9%).

This means, of course, that the country's tech and internet industries still have much room to grow.

China is already number one in mobile payments, having surged to a whopping $9 trillion in 2016, compared to only $112 billion for the US The Asian giant is rapidly becoming cashless – so much so that a friend of mine recently had a hard time using paper money to make a purchase in a Chinese convenience store. In fact, a number of unmanned, fully-automated stores – most notably BingoBox and Alibaba's Tao Cafe – have sprung up all over the country. Transactions are made simply by scanning your smartphone on a designated counter or plate before leaving the store.