END_OF_DOCUMENT_TOKEN_TO_BE_REPLACED

HERE'S something you don't see every day, writes Dan Denning for the Daily Reckoning Australia.

Actually, it's something you haven't seen in 11,315 days, to be precise. Chinese steel production will decline on an annual basis for the first time in 31 years at current production levels, according to Angus Grigg in today's Australian Financial Review.

Chinese steel mills crank out steel faster than Rio, BHP, and FMG can dig up iron ore in the Pilbara. A slow-down in steel consumption — Shanghai steel purchases fell 15% in July from June — probably means lower iron ore prices. How much lower? And are we panicking just a bit?

You'd think so. But here we come to the fatal flaw of State-run capitalism. When you ignore profit in favor of political goals, real resources and labor are wasted in non-productive investments. Grigg elaborates in today's Australian Financial Review:

'China's largely state-owned steel sector has resisted making big cuts to production this year, despite weak demand. This is partly due to the particularities of the local steel sector...

'Local governments force many steel mills to keep producing, even when it is uneconomic, to maintain tax revenue, jobs and to show Beijing they are delivering on economic growth targets.

'State-owned banks often extend financing to these mills, allowing them to produce loss-making lines, but there are fears about credit remaining available to support the steel trade because of recent loan defaults.'

The enabler/crack dealer in this whole scheme is the banking sector. Somebody has to subsidize loss-making ventures. That somebody in China is the state-owned banking sector. And that sector may be running up against the limits of loss-making loans. Three years of making loans to local Chinese governments for infrastructure projects are now coming home to roost.

There are over 54,000 loss-making enterprises in the Chinese economy as of June 2012, according to Tom Orlik in today's Wall Street Journal. That's a 34% increase year over year. According to the Journal (emphasis added is ours):

'Nonperforming loans rose to 438 billion Yuan ($66 billion) in March, from 407 billion Yuan in September 2011. Lenders are preventing a bigger increase by rolling over loans to local-government borrowers. In 2011, banks played pretend and extend with 2.2 trillion Yuan in debt, equivalent to 29 per cent of new loans for the year.

'There could be worse to come. China's ratio of credit to gross domestic product rocketed from around 134 per cent in 2008 to 174 per cent in 2011. If Beijing wants to head off a financial crisis, the stock of credit needs to grow at a slower rate than the overall economy. Given this, the rate of growth for bank loan books could drop closer to single digits.'

Can you see the problem now? China's economy may not have the 'policy flexibility' to ramp up stimulus spending in the way that many analysts breezily claim. Credit as a percentage of GDP is already growing like a weed. Unless the government wants to force more losses on the banks — losses that threaten the accumulated savings of hardworking Chinese — credit growth will slow, along with investment in fixed assets.

That's the theory, anyway. Can the charts tell you anything useful? The Reuters/Jeffries CRB Index — a broad measure of commodities — is up about 12.2% since late June. Higher oil prices have boosted the short-term uptrend. But in order to have real conviction that the CPC can turn the spending taps on in the second-half of the year, you'd want to see the 100-day moving average turn up and cross the 200-day moving average. 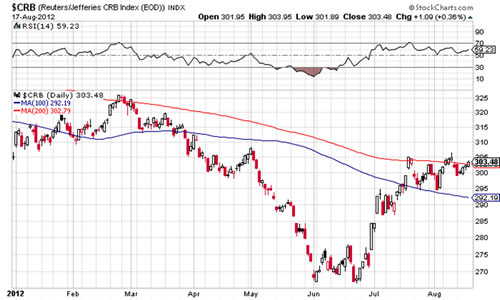 One simple way for China's economy to boost growth now without spending money is to let the Yuan weaken against the US Dollar. Currency wars are all about stealing growth from your economic rivals/customers by devaluation. China can boost the export component of GDP by devaluing the Yuan.

However there may be other signs that China's political leaders are going to wait until after the election of the new Standing Committee of the Politburo later this year before pursuing any new economic or currency policies. When you've run out of economic choices that might avert a crisis, your best choice is to start a political crisis that will distract everyone.

Last week, 14 Hong Kong activists were arrested by the Japanese on a small island in the East China Sea. The island is part of a chain that both China and Japan lay territorial claim too. You can see on the map below that the Japanese and Chinese have different names for the same islands. And this week, about 150 Japanese activists landed on the same island to commemorate Japan's war dead. 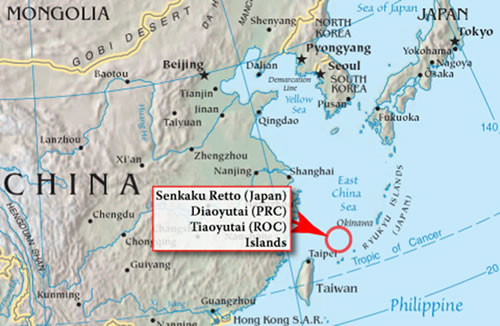 The Financial Times reports that anti-Japanese protests erupted all over China over the weekend. Some Japanese restaurants and retail outlets across China were forced to close. And in the city of Shenzhen, a Japanese-made police car was overturned by an angry crowd.

The last time Japan and China came to blows in the East China Sea was in 2010. Back then, a Chinese fishing boat allegedly rammed a Japanese coast guard vessel in disputed waters. The Japanese took the crew of the fishing boat into custody. China retaliated by halting the export of rare earths to Japanese electronics producers.

Welcome to 21st century warfare. Most people think of war only as armed conflict. But as we're seeing now, warfare includes computer viruses, currency manipulation, export quotas and an ever growing arsenal of ways to get what you want without shooting someone and taking it.

Don't rule out the 'shooting someone and taking it' approach. It's been popular throughout human history, especially as a way of alleviating (or at least redirecting) economic anger and misery. But political tensions have to be systematically ratcheted up by the State before you can start lobbing missiles. Unfortunately, with an election in the US and a change of leadership in China, get ready for the ratcheting.

This is a pretty stiff head wind for stocks to make higher highs into. It would be a brave contrarian who buys now, expecting the political stuff to be resolved without more chaos and crisis. Who's feeling brave today?

Making a Gold Investment? Save money with BullionVault...