END_OF_DOCUMENT_TOKEN_TO_BE_REPLACED

Interest-rate hikes coming to the world's No.2 economy...

FUELED by a massive surge in commodity prices this year, and emanating from China's world leading commodity exchanges, the Middle Kingdom has emerged from more than five years of deflation at the factory level, and the next shift in China's monetary policy could be towards higher interest rates, writes Gary Dorsch at Global Money Trends.

China's producer prices rose at the fastest pace in more than five years in November as prices of coal, steel and other building materials soared, boosting industrial profits and giving firms more cash flow to pay off mountains of debt. The stronger-than-expected +3.3% surge in factory prices, along with upbeat factory readings from China, Europe, and the US; and crude oil prices climbing above $50 /barrel, adds to views that inflation might be ratcheting higher in the global economy.

The jump in China's PPI is a hopeful sign that China has emerged from a multi-year "deflationary trap." Consumer price inflation has also picked up more than expected to +2.3% from a year earlier, the highest since April, due to a +3.7% increase in food prices. The price gains at the factory level were preceded by a big increase in the value of the Equally Weighted Commodity Index <EWCI>, a basket of 17 equally weighted commodities, which has soared to a +19% price gain, compared with a year ago, in Chinese Yuan terms.

Roughly one third of the increase in commodity prices was due to the Yuan's devaluation against the US$. The return to an inflationary environment has reinforced views that the PBoC won't be able to loosen its monetary policy, and instead, has fueled speculation as to when the People's Bank of China <PBoC> might start tightening liquidity. The PBoC has not cut interest rates since October 2015, when worries about deflation were more pressing.

The Bloomberg Commodity index <BCOM> is +18% higher compared with a year ago, when priced in Yuan, and stands in sharp contrast to an annualized decline of -28% in July '15. A construction boom led by higher government spending and a blistering housing market have boosted prices for materials from steel and copper to glass and cement, with speculators adding fuel to a months-long rally in China's commodity futures markets.

Government efforts to reduce excess capacity in steel mills and mining sectors have also buoyed prices by creating shortages in some areas, such as coal. That helped boost industrial profits +9.6% in October from a year earlier. Chinese steel prices soared to 31-month highs, and iron ore futures have rebounded to $76 /ton, the highest in two years. Import prices were +6.7% higher in November compared with a year earlier, the fastest in more than two years, as factories replenished inventories of raw materials, helping to lift commodity prices globally. Higher prices of metals, mainly steel, and coal account for nearly half of the PPI changes.

The sudden return of inflation to China caught bond traders on China's Financial Futures Exchange off guard. There was a violent selloff in China's 10-year bond futures contract on Dec 15th, which plunged by the most on record for a single day, and erased all of the gains of the past 18-months. That's the classic definition of a crash. The yield on the 10-year bond futures contract briefly hit a 16 month high yield of 3.65%, before settling at 3.35%. 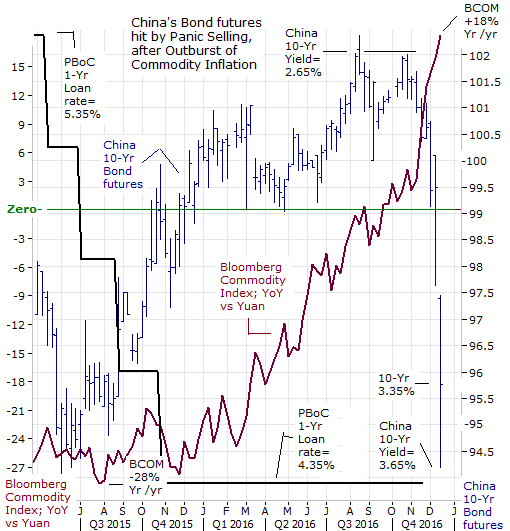 The yield on China's 10-year government bonds had reached a record low of 2.60% in August. The crash happened just four weeks after Donald Trump was elected as US-president, and the day before the Fed hiked the fed funds rate to 0.625%; and most alarming to Chinese traders, the Fed warned of three more rate hikes in 2017. However, the Chinese bond was practically begging for a market crash, as it ignored for too long, the steady increase in commodity prices, that was underway for several weeks before hand.

Another warning signal was downplayed,.The US$ has risen more than +10% against Chinese Yuan, to its highest levels in eight years. Since the election victory of Donald Trump on Nov 8th, China's 1-year T-bill rate has rocketed +80-bps higher to 3% on Dec 16.

If the Fed continues to raise US-interest rates in the year ahead, the single biggest casualty could be China. Traders are worried that the Fed's shift towards a tighter monetary policy will put pressure on Beijing to raise its local interest rates for the first time since 2011 in order to stem huge capital outflows. China's foreign exchange reserves fell by $69 billion in November to its lowest in nearly six years, as the authorities struggled to stem capital outflows and shore up the sliding Yuan. Turmoil has erupted in Chinese bond markets as panicked investors dumped government bonds, and threatens to deliver a hefty blow to debt-laden Chinese companies.

Caught in a vicious cycle, Beijing sold a record $41 billion in US Treasury securities in October – the biggest seller for the month, to raise capital for FX intervention purposes, but at the same time, exerting further upward pressure on US-bond yields, as well. The crash might just become the start of China's headaches -with a $9 trillion bond market that is now in a "bursting bubble" mode.