END_OF_DOCUMENT_TOKEN_TO_BE_REPLACED

Imagine half a dozen Thanksgivings and Christmases all rolled into one...
WELCOME to the year 4713. Or, if you prefer, the Year of the Ram, writes Frank Holmes at US Global Investors.
The Chinese New Year, which kicks off today, is the largest and most widespread cultural event in mainland China, bringing with it massive consumer spending and gift-giving. During this week alone, an estimated 3.6 billion journeys in the China region are taken by road, rail and air in the largest annual human migration. 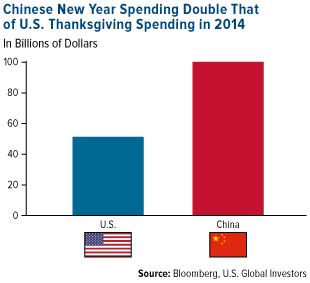 Imagine half a dozen Thanksgivings and Christmases all rolled into one mega-holiday, and you might begin to get a sense of just how significant the Chinese New Year festivities and traditions are.
According to the National Retail Federation, China spent approximately $100 billion on retail and restaurants during the Chinese New Year in 2014. That's double what Americans shelled out during the four-day Thanksgiving and Black Friday spending period.
As I've discussed on numerous occasions, one of the most popular gifts to give and receive during this time is gold – a prime example of the Love Trade.
Most readers of my Frank Talk blog know that China, along with India, leads the world in gold demand. This Chinese New Year is no exception. Official "Year of the Ram" gold coins sold out days ago, and since the beginning of January, withdrawals from the Shanghai Gold Exchange have grown to over 315 tonnes, exceeding the 300 tonnes of newly-mined gold around the globe during the same period.
China, in other words, is consuming more gold than the world is producing. What's not so well-known – but just as amazing – is that China's supply of the precious metal per capita is actually low compared to neighboring Asian countries such as Taiwan and Singapore.
The World Gold Council (WGC), in fact, calls China "a huge, relatively untapped reservoir of gold demand."
This might all change as more and more Chinese citizens move up the socioeconomic ladder. Over the next five years, the country's middle class is projected to swell from 300 million to 500 million – nearly 200 million more people than the entire population of the United States.
This should help boost gold bullion and jewelry sales in China, which fell 33 percent from the previous year.

"I don't see demand staying down because you have had structural changes," commented WGC head of investment research Juan Carlos Artigas in an interview with Hard Assets Investor.

"One of them, emerging market demand from the likes of India and China, continues to grow, and we expect it to continue to grow as those economies develop further."

The Year of the Ram has also ushered in a new visa policy, one that has the potential to draw many more Chinese tourists to American shores.
For years, Chinese citizens could receive only a one-year, multi-entry visa. Now, leisure and business travelers can obtain a visa that allows them to enter multiple times over a 10-year period. The visa application process has also been relaxed.
In terms of overseas spending, Chinese tourists already sit in first place, just above their American counterparts. According to the United Nations World Tourism Organization, a record $129 billion was spent by Chinese travelers in 2013 alone. The average Chinese visitor spends between $6,000 and $7,200 per trip in the US
This visa policy reform is an obvious boon to travel and leisure companies. Other beneficiaries include Chinese airlines, and of course, global airline stocks are currently soaring as a result of low oil prices, increased seat capacity and more fuel-efficient aircraft. The new visa policy has the potential to give these stocks an even stronger boost.
On a lighter note, at least a couple of airports in North America are making the most of the Chinese New Year, hosting performances by Chinese musical artists and providing entertainment such as a lion dance through the terminal and calligraphy.
To our friends and shareholders here in the US and abroad, I wish you all a Happy Chinese New Year!