END_OF_DOCUMENT_TOKEN_TO_BE_REPLACED

CHINESE imports and exports are both still growing, writes Dan Denning in the Daily Reckoning Australia.

But both are growing a lot less fast, and the import growth rate is 50% slower on a month over month basis. This directly effects demand for commodities. We'll come back to that in just a moment.

Chinese exports were up 11.3% in June. This was after a 15.3% increase in May, according to China's National Bureau of Statistics. The US has replaced Europe as China's largest trading partner. The Chinese economy exported $165 billion worth of goods and services to the US and $163 billion to Europe. It ran a $31 billion trade surplus.

The trade surplus figure will be welcome news to the ears of US presidential candidate Mitt Romney. China's trade surplus is an issue in American politics today the way Japan's trade surplus was an issue in the mid-1980s. Back then, the 'imbalance' in global growth was addressed by a staged devaluation of the US Dollar via the Plaza Accord in 1985.

The Plaza Accord was essentially a 'growth' transfer. The US Dollar weakened relative to the Japanese Yen and the West German Deutschmark. Germany and Japan, stronger currencies in their back pocket, increased consumption and shared some of the load for consuming the world to prosperity.

No similar adjustment is possible today. The figures show that China's economy is not ready to take up the world's mantle of leading consumer and replace the US. The Chinese economic growth model is still export-driven. And the model is sputtering.

Exports grew at 9.2% on a six-month basis. That compares to a 24% growth rate in the same six month period last year. Granted, 9.2% export growth is fair dinkum growth. But using that longer six month period shows you exactly how dramatic China's economic slowdown has been. The model of heavy investment in fixed assets (construction, infrastructure and manufacturing) is not corresponding to booming exports. This leaves imports (Chinese consumption) to take up the slack.

China's imports are most definitely not taking up the slack. They did grow by 6.3% in June, but that was nearly half of May's rate at 12.7%. And for the six months finished in June, imports grew at just 9.2%. That's a far cry from the 24% growth rate from the first half of last calendar year.

Big deal, right? We're making an economic mountain out of a statistical molehill, aren't we? Those economic growth figures from China — even if they're growing less fast — would be the absolute envy of every country in the Western world. Is this really all we have for evidence that the Chinese economic growth model — the engine behind Aussie resource earnings growth — is dead?

Why...no. Exhibit B in the case against the Chinese growth model is that commodity imports are falling especially hard. Copper imports were down 18% month-over-month according to data from the Customs Bureau and reported by the Financial Times. The decline may also be a result of Chinese authorities cracking down on stockpiles of copper being used as collateral for loans in the shadow banking system.

The FT calculates that crude oil imports were 12% lower month over month. The Chinese economy is now the world's second largest consumer of crude oil and imports around 6 million barrels a day. But if oil demand is down, it would confirm the declining electricity production figures we quoted on Monday. Engines that aren't running at full speed don't need as much fuel.

Iron ore imports were also down 9% from May's levels. And that, members of the jury, brings us to Exhibit C. The Reserve Bank of Australia published its latest index of commodity prices on July 2. It's fallen 9.9% over the last year. But you don't need us to tell you that. The chart shows it plainly enough. 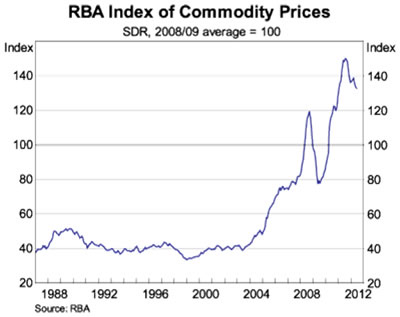 This doesn't mean China's economy is dead, mind you. Its economic growth model depended on China keeping the currency weak relative to the US Dollar and exporting its way to prosperity and full employment. If this model is truly broken, something must replace it. And more importantly, some big adjustment in the world's monetary system is in the offing.

That has been clear for quite some time. How else do you explain ten years in a row of higher Gold Prices (in US Dollar terms)? But there are other clues littered about if you know where to look. For example, Australia may soon become the third country in the world that can directly convert its currency into Chinese Yuan without having to go through the US Dollar first. The Australian Financial Review first broke the story last Thursday.

The Yuan is not ready to be the world's next reserve currency. But China has taken several steps in the last 24 months to 'internationalize' the currency. In March, the RBA agreed to a $30 billion currency swap with the People's Bank of China. It means both countries agree to provide currency to one another in an emergency to ensure the orderly flow of trade and commerce.

Full convertibility — where you can trade Aussie Dollars for Yuan — is the real prize, though. Right now only the Japanese Yen and the US Dollar enjoy direct convertibility. The Australian Dollar could be the next cab off the rank, according to the Australian Financial Review story. The British Pound is another likely candidate.

China is slowly trying to take the US Dollar out of the middle of its transactions with trading partners. Australia and China did $114 billion in trade last year. China accounts for almost 25% of Aussie exports, while Australia is China's fifth largest source of imports. A deal for convertibility makes sense. Why?

But right now both countries have to buy US grapefruits to make a deal with each other. Before the debauching of the US Dollar, everyone in the world found it useful and convenient to deal in grapefruits. There were enough of them to do business anywhere, and they were usually big, stable, and delicious.

Today, with the US Federal Reserve embarked on a death march toward Dollar debasement, trading oranges for grapefruit in order to buy goods priced in pineapples adds a layer of friction and extra cost to every contraction (even though it sounds like an amazing fruit drink). China would like to remove the grapefruit from its currency dealings with other nations. This is what 'internationalization' is all about.

The less fruity aspect to this discussion is that China has a cellar full of rotting grapefruit. China sussed this out a while ago and has engaged in a stealth campaign to replace its grapefruit hoard with something less juicy, denser, and a lot more gold colored.

So the long term driver of the Gold Price could be China's attempt to corner the gold market. This would be the endgame of the currency war and the marginalization of the US Dollar. China would use Yuan in bilateral trade and eventually open the currency up to full convertibility.

All of that could happen in the next few years. But Aussie gold may be going up in the short-term anyway. With Chinese growth numbers off and import numbers down, the RBA may more inclined to pull the trigger on another rate cut which would weaken the Aussie relative to gold and the USD. China's Friday GDP figure will be influential. Stay tuned.

Looking to get some money out of "rotting grapefruits" and into Gold Bullion? Visit BullionVault...