END_OF_DOCUMENT_TOKEN_TO_BE_REPLACED

China's still hoovering up gold as Beijing prepares for a handover of power...

A CITY on lockdown. Street vendors are closed. Taxi drivers have been ordered to seal their windows to prevent seditious material from being leafleted in the main square.

Another G8 or NATO summit in the West? Heh. No, it's the once-every-decade gathering of the Chinese Communist Party's Congress, writes Addison Wiggin at the Daily Reckoning.

The event started on Thursday... and could have immediate ramifications on US Treasuries, the US Dollar and, by extension, the Gold Price.

"The [Chinese Communist Party's] meeting's more than 2,000 delegates choose a central committee," explains the BBC, "which then chooses the country's highest decision-making body, the Standing Committee of the Politburo. The process takes place behind closed doors, with the makeup of the top bodies in reality decided ahead of time."

If the procedures are, umn, less than transparent, the outgoing speech president Hu Jintao was refreshingly upfront by Western standards. "If we fail to handle this issue well," Hu lamented the rampant corruption inherent in their system, "it could prove fatal to the party, and even cause the collapse of the party and the fall of the state."

Then again, Hu's predecessor Jiang Zemin said the same thing 10 years ago. The party was "heading for self-destruction" if they failed get corruption under control. Apparently, the Chinese take a long-range view on all plans... not just those involving economic domination of the planet.

Corruption (and snarky comments) aside, "China has a long list of challenges," says the Daily Reckoning's macro strategist Dan Amoss. But the investment implications for you are real.

"Its manufacturing companies face sluggish international markets," Amoss asserts, "its banks are dealing with the fallout of a burst credit bubble; its imbalanced economy still depends on a destructive level of construction activity; and, of course, it's undergoing the first change in political leadership in 10 years.

"Considering these challenges, China's currency management policy has shifted. The People's Bank of China is not nearly so concerned with providing vendor financing to China's US customers (by recycling export earnings back into the Treasury market).

"Chinese leaders acknowledge that the country already has enough US Treasuries, and have allowed their Treasury portfolio to shrink slowly in recent months. What they are accumulating (unofficially) is gold, which we can see in the soaring gold imports through Hong Kong."

Chinese imports continue to soar. In September, they totaled 69.7 metric tons — up an impressive 22% from a year earlier. 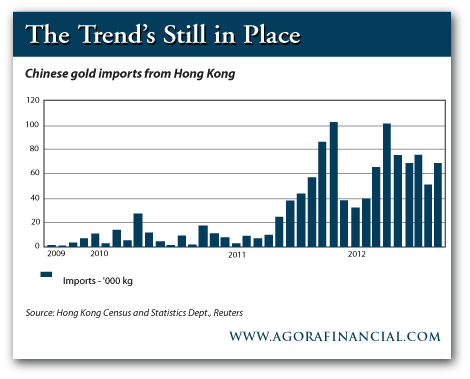 "Gold is the perfect hedge for the slowly eroding value of China's US Treasury portfolio," Dan concludes. "After the US elections revealed a country likely heading more towards a European economic model, the shift into gold should accelerate."