END_OF_DOCUMENT_TOKEN_TO_BE_REPLACED

China has a lot of deleveraging to do...
WE ARE all aware that the global economy is still relatively stagnant, running below optimal gross domestic product (GDP) levels. Specifically, the Chinese economy is not only experiencing a slowdown in growth, but also a liquidity crunch, writes Sasha Cekerevac of Investment Contrarians.
One of my concerns regarding the Chinese economy over the past couple of years has been the rampant increase in credit and loose lending standards. Because the Chinese economy has become such an integral part of the global economy, if imbalances within that nation aren't addressed, this will lead to further speculative boom-and-bust cycles.
Last week, the interbank lending rate, which is the interest rate banks charge when they lend to each other, spiked to 13.44%. This compares to an average of 3% over the past 18 months. Since last week, the interbank lending rate has fallen back to 6.48%; still, concerns are mounting over liquidity constraints. (Source: Wassener, B., "Asian Markets Falter After Central Bank Statement," New York Times, June 24, 2013.)
The global economy has relied too much on excess credit for growth and an increase in debt over the past decade. We have seen what happens with too much credit when the US housing market crashed a few years ago.
But the Chinese central bank did not step in initially when the interbank lending rate skyrocketed. That is a sign to both banks and companies in China that they will not necessarily be bailed out without suffering costs associated with poor lending practices.
It's a sign of China's new leadership, which is trying to shift the Chinese economy into an increasingly domestically oriented economy built on lower levels of debt. The focus on lower levels of lending should lead to a stronger long-term Chinese economy.
However, the process of deleveraging is never easy, and in the short term, there are many painful steps that need to be taken. Because the Chinese economy has grown to be so large, those people who think it can continue growing at 10% or more per year clearly don't understand the law of large numbers and the limits to growth.
As a country becomes a larger part of the global economy, it can only maintain a certain level of national growth. As the Chinese economy tries to shift to a more stable footing, it will naturally lead to lower levels of economic growth. That situation is much like the one here in the US, where the economy cannot grow at a pace faster than approximately three percent without serious consequences, even though the US is still a leader in the global economy.
The chart for the Dow Jones Shanghai Index is featured below: 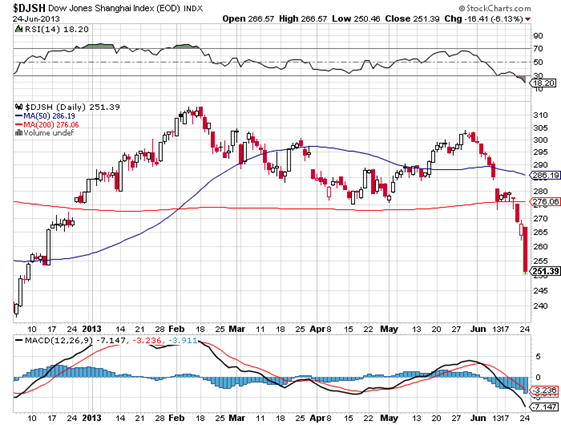