END_OF_DOCUMENT_TOKEN_TO_BE_REPLACED

It's all going down Down Under. But when will the mainstream wake up...?

SO THE OFFICIAL hand-wringing about the end of Australia's mining boom has begun, writes Dan Denning in his Australian Daily Reckoning.

Smart investors have known it was coming for a while now, and have already prepared. So do yourself a favour and remove pages 16 and 17 from today's Australian Financial Review. The 'Fin' is a pretty useful newspaper. But those two pages in today's paper contain the results of a survey from Australia's major banks, brokerages, and economists. As the old joke goes, you could lie all of Australia's economists from end to end and they still wouldn't reach a conclusion.

The conventional wisdom is that the Reserve Bank of Australia will probably cut the cash rate at least once before the end of the year; if not tomorrow, then definitely on Melbourne Cup Day (November 6th). In the unimaginative and banal world of big bank economists, this rate cut will be enough to keep the Aussie economy growing at 3% while China 'slows'.

Is it possible that the same profession that completely missed the global financial crisis would completely underestimate the severity of China's pull-back? Well, past performance is no guarantee of future results. But when it comes to underestimating severe shocks to the economy, economists are as reliable as the sun. You can bet their sunny disposition will be inclined to view 2013 in the best possible light.

The best-case scenario is that the investment boom reaches its climax in the next year. Big spending by the miners and energy companies will support GDP. Then, once the investment pipeline tapers off, increased production of commodities (even at lower prices) will lead to steady growth in national income. Everything will be fine. China's new leaders will spend to the heavens and the iron ore price will rise. Nothing to see here. Move along.

But China itself isn't exactly moving along. The volume of cargo moved by rail fell 9.2% in August, year-over-year, according to data from China's National Bureau of Statistics. The decline in the volume of stuff moving on China's railroads matches the size of the decline in 2008 and 2009. 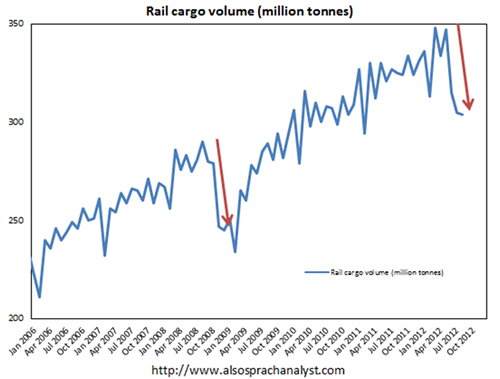 Back then, China reignited the mining boom by spending nearly $600 billion on 'shovel-ready' infrastructure projects. Will a similar spending boom bail Australia out again? No! The mining boom is dead. That's the view we articulated in our most recent report, 'How To Make Money from the End of the Mining Boom'.

"Our view for the last year has been that many analysts were underestimating the extent of the impending slowdown in China...policymakers [in China] are grappling with a major change in the economic growth model."

If, by 'a major change in', he means 'the death of', then he's dead right. Most major economists won't/don't see this coming. They can only perceive the world through the Keynesian senses of debt, GDP growth, government spending, and aggregate demand. They don't understand or believe in sound money (real money).

If you think we're exaggerating, you should have a look at why Michael Pettis has gone out on a limb to show why, "By 2015, hard commodity prices will have collapsed." Pettis reckons there are four reasons:

It's all persuasive. And absent some economic sleight of hand by the new communists in charge, it seems like a plausible scenario. But economic facts aside, if it's the end of the mining boom, what are you to do with a company like BHP? This is where 2013 could get really interesting for investors.

BHP is not only a hard rock miner. It's an oil and energy company as well. That could pay off in 2013. It may not be enough to compensate for falling iron ore and coal prices. But it's better than having nothing to fall back on.