END_OF_DOCUMENT_TOKEN_TO_BE_REPLACED

The world may not be as 'civilized' as Berkshire Hathaway would like to think...

'I think gold is a great thing to sew into your garments if you're a Jewish family in Vienna in 1939, but I think civilized people don't Buy Gold. They invest in productive businesses.'

To unpack this statement we need to focus on two key words in Charlie's statement: 'productive' and 'civilized', writes Dan Denning, editor of the Daily Reckoning Australia.

Charlie might be right if the world were civilized. But maybe the modern world isn't as civilized as he thinks. Part of what made the world so uncivilized in 1939 was unsound money. The abandonment of the gold standard made the expansion of the warfare state possible in 1914. The equally unsound system that emerged out of the war – including the Treaty of Versailles – virtually guaranteed that monetary and fiscal instability would lead to political instability. Radical parties like the Nazis flourished.

Yet it's hard to argue with Charlie's implied criticism of gold, namely that it's not an investment. Certainly that's true of Gold Bullion. I view Gold Bullion as money. You are not buying it for a capital gain. You are buying it, by my reckoning, as way of preserving purchasing power. You extract paper from the fiat money system and turn it into something (bullion) you can later exchange for whatever currency emerges when the financial system becomes more civilized.

Berkshire's own B-class shares have also underperformed gold. This shows you that maybe Berkshire's historic performance has more to do with the expansion of the US monetary base over time than underlying profit growth in productive businesses. But let's look at the chart before we make the conclusion. 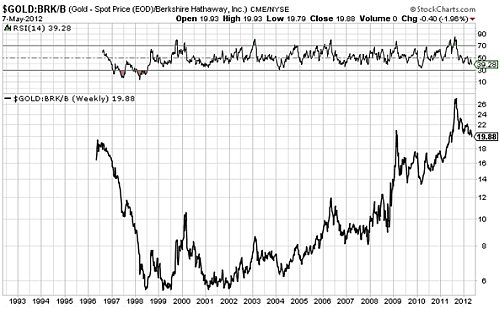 The chart tells you the number of Berkshire B shares it would take to buy you an ounce of gold denominated in US Dollars. The low ratio in 1998 and 1999 is a reflection of gold's 20-year bottom and Berkshire's generally solid performance. The spike in the ratio in 2000 coincided with the height of the Internet bubble, in which everyone thought Buffett had become an irrelevant and doddering old fool. They were wrong.

But as you can see, since 2001 Berkshire's shares have declined relative to gold. That is, it takes you more and more shares of Berkshire to buy an ounce of gold. This may explain Buffett and Munger's vocal and public hostility to gold. Or maybe that's just a function of both men living most of their adult lives in an era where the monetary system was not disintegrating. They are unable to imagine it.

In the event, a superficial analysis of the chart shows you that the B shares have rallied against gold since late 2011. This is a combination of gold's 14% fall from its all-time high of $1900 and of the boost to stocks from the various liquidity programs from the Federal Reserve and the European Central Bank (QE2, Operation Twist, LTRO 1, and LTRO 2).

There's no doubt about the general trend of the ratio since 2000. It's taking you more and more Berkshire shares to buy an ounce of gold. No wonder Charlie is so cranky!

But this isn't an indictment of the investment acumen of Buffett and Munger. It's an indictment of the world! A civilized society with civilized people has sound money. An economy with sound money has price stability. This stability allows for long-term planning and accurate valuation of what a business is worth. Investors are rewarded for identifying which businesses are the most productive and efficient users of shareholder capital.

In an uncivilized society where the value of your labor is stolen through inflation (made possible by an unsound money system) does it pay to invest in productive businesses? Does it even pay to be personally productive at all when a progressive tax system confiscates your wealth in order to be redistributed to the unproductive?

Wouldn't it be a lot easier to be a rent-seeking capitalist that benefits from the government perversion of money, not to mention the perversion of the tax system in which members of the elite corporate class can escape the predations of the State? Hmm.

If you accept that we live in civilized monetary times where productive labor is actually rewarded, your brain has been tranquilized by the Big Lie of our times. Your brain (and your portfolio) are in danger of falling gracefully out of a tree.

Munger wants you right where you are. The less you think about how civilized the current monetary system is, the less likely you are to question it or disrupt it (which would be inconvenient for Charlie). We highly recommend movement and adaptation to fit the monetary reality.

Get the safest Gold Bullion at the lowest possible price with BullionVault...