END_OF_DOCUMENT_TOKEN_TO_BE_REPLACED

CENTRAL BANKS the world over are waging an all-out inflationary war on the ongoing credit contraction, writes Puru Saxena in his Money Matters client briefing from Hong Kong.

The establishment is attempting to thwart the post-bubble deflationary forces via record-low interest rates, deficit spending and quantitative easing (buying assets from newly created money). Over the past 18 months, the post-bubble contraction had the upper hand as it decimated asset prices all over the world. However, it seems as though the consequences of monetary inflation and central bank sponsored debasement are finally starting to dominate.

A few weeks ago, in a bold move, the Federal Reserve announced that it would buy $1 trillion worth of US Treasuries and mortgage-backed agency debt. Apparently, the idea behind this measure is to subdue long-term interest rates in the United States, thereby assisting homeowners.

However, any serious investor should realize that this line of thinking is totally flawed. Allow me to explain:

As the Federal Reserve steps up its buying of US government debt, it would have to create money out of thin air. When this occurs, inflationary expectations will rise and nervous bond investors will automatically demand higher interest-rates in order to protect themselves from inflation. So, as an inflation-premium sets in the market, bond investors will reset interest-rates at a much higher level.

It is worth noting that the US establishment engaged in the same misguided policy roughly 60 years ago and the result was much higher interest- rates...and that saga morphed into the inflationary holocaust of the late 1970s.

This time around, the Federal Reserve is making the same mistake and (once again) the end result will be an inflationary tsunami. In fact, I would argue that by buying US Treasuries after a 28-year bull-market in US government bonds, the Federal Reserve is following in the foot steps of the Bank of England which infamously sold half of Britain's Gold Bullion reserves at the lows of a 21-year bear-market.

Never under-estimate the genius of central bankers, in short. And make no mistake; Dr. Bernanke has studied the Great Depression of the 1930s and he is now in charge of the printing press. You can bet anything that he will continue to flood the banking system with trillions of newly created dollars. When this additional money works its way into the economy, asset prices will rise. It is worth noting that both the supply of money and credit in the United States continue to expand at a furious pace.

There can be no doubt that this development is extremely inflationary and will cause commodity and consumer prices to skyrocket in the years ahead.

Throughout recorded history, massive surges in the supply of money and credit have always led to rising prices in some parts of the economy and there is no reason to conclude that this time should be any different.

Today, there are many deflationists who are claiming that the prices will remain depressed for many years due to the weak economic activity. However, these folks should note that even during the Great Depression of the 1930s, prices of commodities stabilized and began rising in 1933.

The chart below confirms that due to monetary inflation in the early 1930s, the CRB Index embarked on a secular bull-market which had a violent correction in 1937 (marked by a purple arrow). Following that crash, commodities bottomed out in 1938 and thanks to the super-inflationary efforts of President Roosevelt, the CRB Index surged for more than a decade. 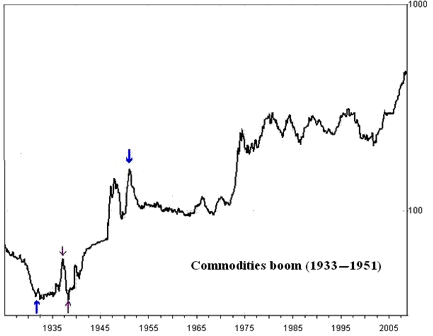 Contrary to popular opinion, that huge commodities boom took place despite an economic depression. Furthermore, it is worth pointing out that commodities rose relentlessly despite the fact that private-sector debt and bank lending remained essentially flat until 1945.

Back then, similar to the current situation, banks accumulated large reserves but didn't loan these reserves into the broad economy. However, from 1932 onwards, the US government borrowed so much new money into existence that prices began to rise way before private-sector credit started to expand.

A similar drama unfolded in the 1970s when commodities went through the roof. During that time, economic activity was dismal but governments decided to tackle the recession with money creation. The net result was surging hard asset prices and mind-numbing inflation.

Turning to the present situation, US private-sector debt is shrinking as banks remain fearful of lending. However, the US government (along with other nations) is borrowing and creating gigantic sums of money and this should cause prices to rise for the next 3-4 years. Accordingly, we are maintaining our positions in top-quality businesses in the resources sector.

Finally, in the short-term, most metals are over-bought and the usual summer correction will probably unfold. So, investors may want to wait for a pullback before adding to their positions. Precious metals, led by Gold Bullion, have a tendency to form an important top during spring and it is likely that we may see lower prices in the weeks ahead.