END_OF_DOCUMENT_TOKEN_TO_BE_REPLACED

2018 could be another knock-out for emerging Europe...

DOMESTIC U.S. stocks were a great place to invest in 2017, but hopefully you didn't overlook opportunities overseas, writes Frank Holmes at US Global Investors.

Emerging markets had a gangbusters year, surging more than 37.5% with dividends reinvested, as measured by the MSCI Emerging Markets Index. A combination of rising PMIs – or the purchasing manager's index I talk so often about – and a steadily declining US Dollar helped emerging economies in Asia, Latin America, Europe and elsewhere eke out their best year since 2010. 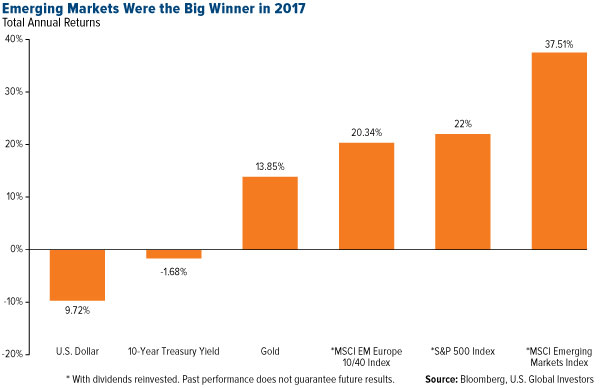 This was a boon for our Emerging Europe Fund (EUROX). Throughout 2017, the fund traded consistently above its 200-day moving averages and ended the year at a three-year high.

I'm optimistic this upswing can be sustained this year, supported by low unemployment, low inflation and record manufacturing growth.

The European Central Bank (ECB) has indicated that it will continue its accommodative monetary policy by keeping rates low and expanding its balance sheet some €270 billion ($326 billion) through the first three quarters of 2018.

I can't stress enough the role active management played here. Using financial indicators such as cash flow return on invested capital (CFROIC) and low debt-to-equity, we managed to outperform the fund's benchmark and its main competitor.

Two positive contributors to fund performance last year were an overweight in Turkish stocks and underweight in Russian stocks.

When screening for CFROIC, our model pointed to Turkey as having the most attractive companies on a relative basis. Our allocation was well-made, as Turkey far outperformed its CEE peers. The Borsa Istanbul 100 Index ended the year up close to 48% in local currency, followed by Poland's WIG20, which advanced more than 26%. 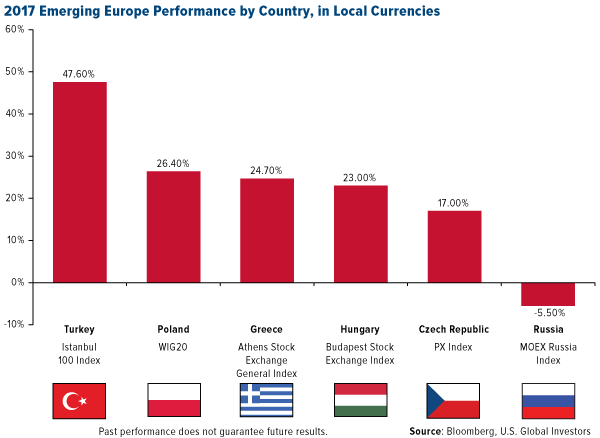 Again, we underweighted Russia based on our model and after factoring in overall negative investor sentiment, which really began in earnest in 2014 after the country annexed Crimea, inviting international sanctions.

The ill will only intensified during and after the 2016 US presidential election, and today, we see Russian stocks, as measured by the MOEX Russia Index, decoupling from Brent crude oil prices. 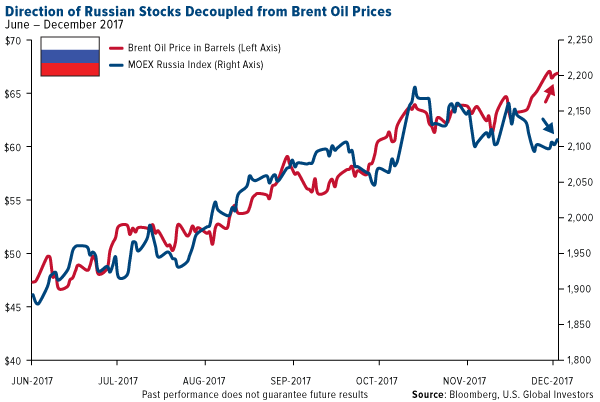 Historically, Russian stocks have closely tracked Brent crude oil prices, which accounted for nearly 50% of the federation's exports in 2016.

But it seems now as if a sell-off is underway as new details continue to emerge from the investigation into Russia's meddling in the US election. It appears markets have mostly soured on Vladimir Putin, with the MOEC ending the year down 5.5%.

A good illustration of our attentive stock selection in Russian equities was our exit out of Magnit, the country's largest retailer. We dumped the stock in April after it had lost around 9% for the year. By the end of 2017, it had fallen a further 25%.

Meanwhile, we remained long Sberbank, the number one holding in EUROX. In the third quarter of 2017, the Russian bank posted a record 224.1 billion Rubles (approximately $4 billion) in net profit, an amazing 64% increase from the same three-month period in 2016. Sberbank ended the year up more than 46%.

Besides a weak US Dollar, the real catalyst for growth in emerging European markets last year was a reenergized manufacturing sector. Take a look at the PMIs in the CEE area. All of the major economies that EUROX invests in saw manufacturing expand strongly throughout most of 2017 – and that includes debt-ridden Greece, which had been a laggard in this area until recently.

In December, the Mediterranean country's manufacturing sector rose the fastest since 2008. (Anything above 50 indicates expansion; anything below, deterioration.) 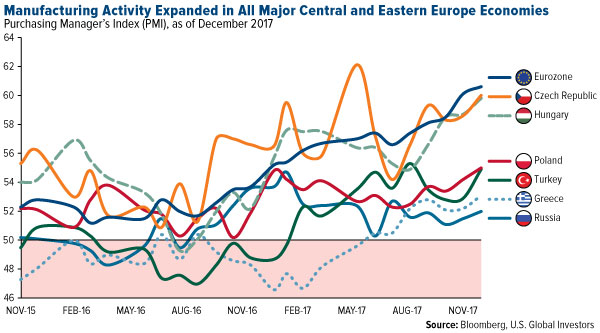 The PMI, unlike gross domestic product (GDP), is a forward-looking indicator. That all CEE countries are in expansion mode is good news, I believe, for the next six months at least, if not the rest of 2018.

The Eurozone as a whole knocked it out of the park in December, posting a 60.6 reading, the highest PMI reading ever in the series' two-decade history. Germany, Austria, the Netherlands and Ireland all ended the year at record-high levels, while Italy and France had their best showing since 2000.

As I've shared with you before, CEE countries have tended to benefit greatly from strong economic growth in its western neighbors, and last year was no exception. The Czech Republic and Hungary were standouts, their manufacturing sectors growing at the fastest rates on improved output, new orders and job creation.

Brexit has also been a windfall for the CEE regions, as companies have moved high-quality jobs out of the United Kingdom and into Poland and other central and eastern European Union nations.

On a final note, Poland was recently upgraded from the "advanced emerging" category to "developed" by FTSE Russell, effective September of this year.

This will place Poland in the same company as, among others, the US, UK, Japan, Germany and Singapore. The country is the first in the CEE region to receive "developed" status, and I believe the news will attract even more inflows from foreign investors.

Among the decisive factors behind the upgrade were the country's advanced infrastructure, secure trading and a high gross national income (GNI) per capita. The World Bank forecasts its economy in 2018 to grow 3.3%, up significantly from 2.7% in 2016, on the back of a strong labor market, improved consumption and the child benefit program Family 500+.

Economists aren't the only ones noticing the improvement. Young Polish expats who had formerly sought work in the UK and elsewhere are now returning home in large numbers to participate in the booming economy. Banks and other companies, including JPMorgan Chase and Goldman Sachs, are similarly considering opening branches in Poland and hiring local talent.

This represents quite an about-face for a country that, as recently as 1990, was languishing under communist rule.