END_OF_DOCUMENT_TOKEN_TO_BE_REPLACED

"We, the undersigned, aren't selling gold anyway. But just so you know..."
In MAY 2014, the European Central Bank and 20 other European gold holders announced the signing of their fourth Central Bank Gold Agreement, writes Julian D.W.Phillips at GoldForecaster.com.
This agreement, which applies as of 27 September 2014, will last for five years and the signatories have stated that they currently do not have any plans to sell significant amounts of gold.
Collectively, at the end of 2013, central banks held around 30,500 tonnes of gold, which is approximately one-fifth of all the gold ever mined. Moreover, these holdings are highly concentrated in the advanced economies of Western Europe and North America, a statement that their gold reserves remained an important reserve asset, a statement made in each of the four agreements since then.
After 29 years of implied threats that gold was moving away from being an important reserve asset and the potential sales of central bank gold the gold price had fallen to $275 down from $850 in 1985. But the sales that were seen were so small that with hindsight they were seen as only token gestures. Today the developed world's central banks continue to hold around 80% or more of the gold they held in 1970.
It only became clear subsequently that the real purpose behind these sales (from 1975) were to reinforce the establishment of the US Dollar as 'real money' and the removal of gold as such. The US government would brook no competition from gold, but continued to hold gold (as money 'in extremis') in 'back-up'.
Then in 1999 the Euro was to be launched. It too needed to ensure that Europeans, who had a long tradition of trusting gold over currencies, would not reject the Euro in favor of gold and turn to gold and its potentially rising price. So it was decided that while gold was to be retained as an important reserve asset, its price had to be restrained for some time, while Europeans were made to accept the Euro as a reliable, functioning money in their daily lives.
To that end, major European central banks signed the Central Bank Gold Agreement (CBGA) in 1999, limiting the amount of gold that signatories can collectively sell in any one year. There have since been two further agreements, in 2004 and 2009. Now the fourth Central Bank Gold Agreement is in operation.
Together, the European Central Bank, the Nationale Bank van België/Banque Nationale de Belgique, the Deutsche Bundesbank, Eesti Pank, the Central Bank of Ireland, the Bank of Greece, the Banco de España, the Banque de France, the Banca d'Italia, the Central Bank of Cyprus, Latvijas Banka, the Banque centrale du Luxembourg, the Central Bank of Malta, De Nederlandsche Bank, the Oesterreichische Nationalbank, the Banco de Portugal, Banka Slovenije, Národná banka Slovenska, Suomen Pankki – Finlands Bank, Sveriges Riksbank and the Swiss National Bank say that...

"In the interest of clarifying their intentions with respect to their gold holdings, the signatories of the fourth CBGA issue the following statement:
"This agreement, which applies as of 27 September 2014, following the expiry of the current agreement, will be reviewed after five years."

The first clause confirms the ongoing role of gold as an important reserve asset. The most important part of the statement is the third part, where the signatories confirm "they do not have any plans to sell significant amounts of gold."
In other words they have completed their sales. We do not expect them to resurrect their sales as they have fulfilled their purpose. Their sales stopped in 2010 in effect, bar some small sales by Germany of gold to be minted into coins. We did not consider these a part of these agreements.
The statement clarifies that none of the signatories will act independently of the rest and sell gold. They will coordinate any future transactions with the other signatories should a situation arise where a signatory wishes to sell again. We believe that this will not happen because of the financially strategic and confidence building nature of their gold reserves.
This agreement in lasting for five more years reassures the gold market that none of the signatories will sell gold for five years and even then they will likely make a further agreement for five more years. 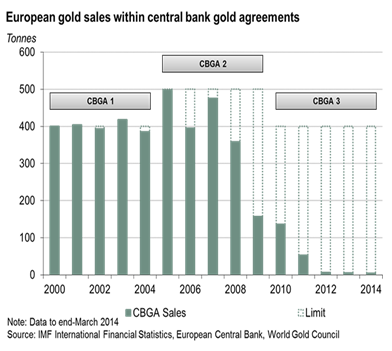 To us this statement and agreement removes the specter of central bank gold sales in the future. As we have seen since these sales were halted in 2010, emerging market central banks have been buyers of gold steadily and carefully, without chasing prices.
We have the impression that the bullion banks go to prospective central bank buyers and 'make the offer' of gold available on the market, which the central bank then buys. They do not announce their intentions and act so as not to affect the price barring taking stock from the market.
This not only reassures gold-producing countries and companies, who can be reassured that there will be no policy of undermining the price of gold with uncoordinated sales of gold, but tells the rest of the world including emerging central bank buyers that there will be no supplies from them put on sale. Such buyers will have to find what gold they can on the open market or from their own production.