END_OF_DOCUMENT_TOKEN_TO_BE_REPLACED

In the EARLY DAYS of making our film, IOUSA, we made the decision to stick with Congressional Budget Office (CBO) numbers, writes Addison Wiggin in The Daily Reckoning.

That's not because we inherently trust them. We enjoy parsing the shadow government statistics produced by John Williams at Shadowstats.com as much as the next armchair economist, too. But the CBO numbers are theoretically conservative, and whether we like it or not, they are the numbers the market reacts to and the numbers law-makers are meant to use when crafting new legislation.

In those early days of our research, in May 2006, the CBO projected Social Security would run out of cash by 2019. By the time we finished the film, the CBO estimate had been moved forward to 2017.

Last year, in 2009, the government bean counters estimated the fund would be bankrupt by 2016. Whereas this year, because of the credit crisis and recession, the CBO says it's happening now, in 2010. The problem with running chronic deficits is when a real crisis develops, the government is left without the resources to address it. And unfortunately, the buck stops with your wallet, your paycheck, your retirement plans.

The CBO just crunched the numbers from President Obama's proposed budget for fiscal 2011. Then it projected the resulting deficits for the rest of the decade. 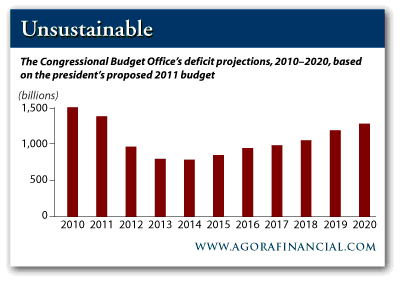 If that's not scary enough, consider the CBO's assumptions behind these numbers:

In other words, the budget assumes no more recessions the rest of the decade. (No energy shocks, either.)

That's fantasyland. And if members of Congress don't know it, their staffs who study this sort of thing do. They're going to be scrounging around for more revenue. And after a while, there's only so much that can be squeezed out of "the rich".

Which makes us worry about the income tax bill Congress will pass this year.

You haven't heard about it? Can't blame you, with all the hoopla over health care. And with that out of the way, Congress now has its sights set on financial "reform" and climate change laws. But if the lowest- income Americans don't want to see a 50% tax increase come next year, Congress is going to have to do something this year.

That's right. Remember, the two rounds of tax cuts passed in 2001 and 2003 expire next year if Congress does nothing.

Yes, the president is committed to allowing the cuts to expire for households earning $250,000 a year or more. But they go away for everyone else unless Congress passes a new tax law. The lowest bracket of taxpayers would see its rates go up from 10% to 15%...an effective 50% increase.

That's not gonna happen. So yes, there will be income tax legislation this year. But will it only hit households above the magic $250,000 threshold? Or will the scramble for revenue hit other people as well? And how soon?

We don't know. But we know something's in the works. The acting chairman of the Ways and Means Committee told The Hill newspaper he hopes to take it up as soon as this month. Mainstream media are paying no attention. But we will.

Last month, I addressed a group of students at the Towson University school of finance by invitation of my friend Tim Maurer who, in addition to being a best-selling co-author of Financial Crossroads, teaches a class on annuities and taxation and other things that CPAs are supposed to know. We discussed the issues raised in IOUSA after they'd been assigned to watch it for the class.

"What is so bad about a debt-to-GDP ratio in the 90% range?" one student asked. "We had greater ratios during and after World War II. And Japan has been running in excess of 130% of GDP for years. They seem to be doing fine."

"You don't know this yet," we tried to explain, "but when you leave school with a mound of debt, try to find work in a struggling economy – you'll begin to understand. When you try to buy a home...when you want to get married...send future children to school...when you try to hang your shingle and attract clients for your wealth advisory business, you'll begin to see that productive debt is not a bad thing. But unproductive debt, debt for consumption purposes, limits your options."

We used to be a nation of thrifty creditors. Now even our sharpest students look abroad and see no problem with collectivized risk and a mountain of unpaid liabilities.

Looking to secure your wealth with Physical Gold today...?