END_OF_DOCUMENT_TOKEN_TO_BE_REPLACED

As Carnac, the late-night host would list off three seemingly unrelated words, all of which answered a question that was sealed in an envelope that he held to his forehead.

Today we're going to play the same game, with the answers being PayPal, Kanye (or Ye, as he's now known) and central bank digital currencies (CBDCs). And the question: What are the consequences of financial hyper-centralization?

Some of you will make the connections immediately. For everyone else, let me explain.

PayPal, the financial technology (fintech) firm cofounded over 20 years ago by Peter Thiel, Elon Musk and others, was roundly criticized last week after an update to its terms of service showed that the company would fine users $2,500 for, among other things, spreading "misinformation". A PayPal spokesperson was quick to walk back the update, even claiming that the language "was never intended to be inserted in our policy," but the damage was done. #DeletePayPal started trending on Twitter, and the company's stock tanked nearly 12%.

As for Ye, he and his apparel brand Yeezy were reportedly dropped last week by JPMorgan Chase. In a letter widely shared on social media, JPMorgan says Ye has until November 21 to move his business finances elsewhere.

No reason was given by the bank to cut ties with the billionaire rapper, but it's easy to surmise that Ye was targeted for his political beliefs and outspokenness. I don't agree with everything he says, nor should you. He's a controversial figure, and his comments are often erratic and designed to get a rise out of his critics. I'm not sure, though, that this should have anything to do with his access to banking services.

The two cases of PayPal and Ye represent what I believe are legitimate and mounting concerns surrounding centralized finance. Admittedly, Ye is an extreme example. He's a multiplatinum recording artist with tens of millions of social media followers. But there's a real fear among everyday people that they too can be fined or have their accounts frozen or canceled at any time for expressing nonconformist views.

That brings me to CBDCs. I was in Europe last week where I attended the Bitcoin Amsterdam conference, and I was honored to participate on a lively panel that was aptly titled "The Specter of CBDCs".

As I told the audience, I believe CBDCs are inevitable, ready or not. There are too many perceived benefits. These currencies offer broad public access and instant settlements, streamline cross-border payments, preserve the dominance of a nation's currency and reduce the operational costs of maintaining physical cash. Here in the US, millions upon millions of Dollars' worth of bills and coins are lost or accidentally thrown away every year. CBDCs would solve this problem.

An estimated 90% of the world's central banks currently have CBDC plans somewhere in the pipeline. As I write this, only two countries have officially launched their own digital currencies – the Bahamas with its Sand Dollar, and Nigeria with its eNaira – but expect many more to follow in the coming years.

China, the world's second largest economy, has been piloting its own CBDC for a couple of years now, and India, the seventh largest, released a report last week laying out the "planned features of the digital Rupee." A pilot program of the currency is expected to begin "soon." And speaking at an annual International Monetary Fund (IMF) meeting, Treasury Secretary Janet Yellen said that the US should be "in a position where we could issue" a CBDC. 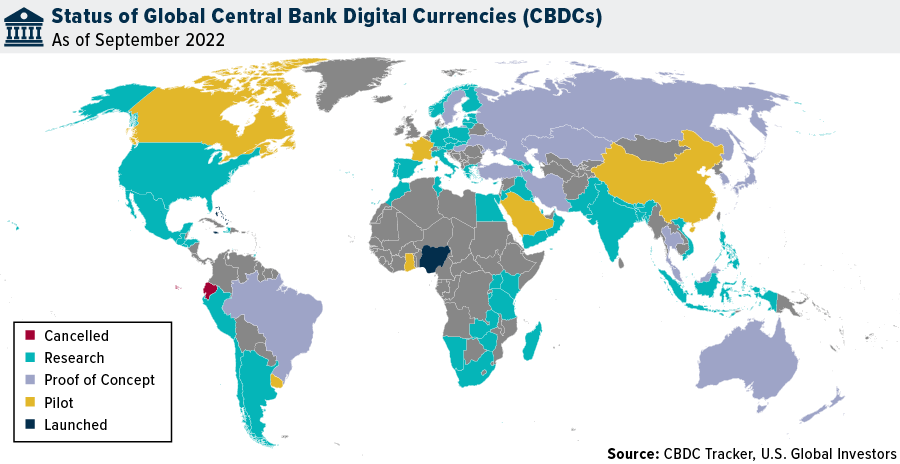 Due to the centralized nature of CBDCs, however, there are a number of concerns that give many people pause. Unlike Bitcoin, which is decentralized and anonymous, CBDCs raise questions about privacy, government interference and manipulation.

In the White House's own review of digital currencies, issued last month, policymakers write that a potential US coin system should "promote compliance with" anti-money laundering (AML) and counter-terrorist financing (CFT) laws. Such a system should also "prevent the use of CBDC in ways that violate civil or human rights." Further, it should be sustainable; that is, it should "minimize energy use, resources use, greenhouse gas emissions, other pollution and environmental impacts on local communities."

Nothing about this sounds inherently nefarious, but then, some of us may have said the same thing about PayPal's "misinformation" policy (whether intended or not) and JPMorgan's decision to end its relationship with a polarizing celebrity.

I believe this only improves Bitcoin's use case, especially if we're headed for a digital future. 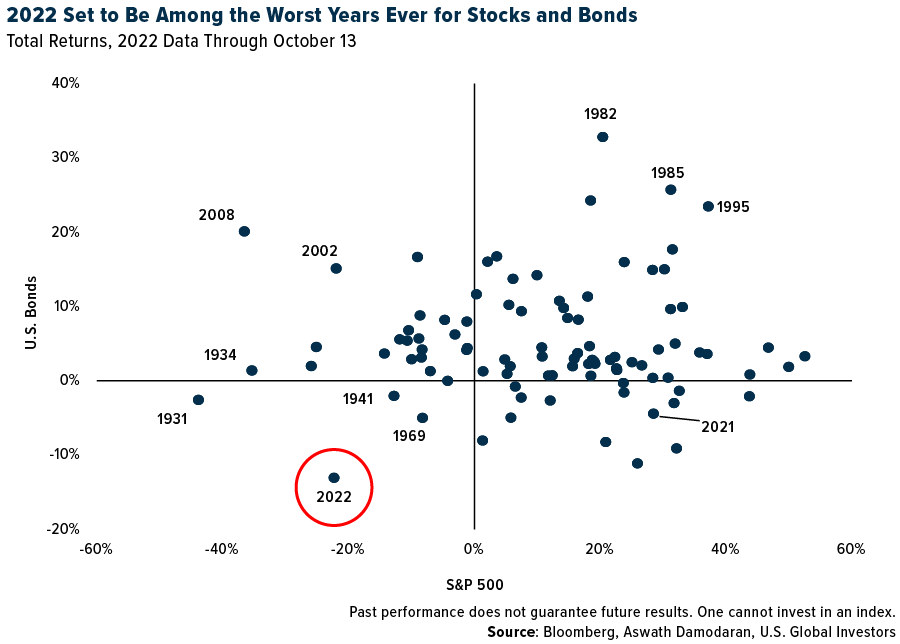 Here's another way to visualize it. The scatter plot below shows annual returns for US stocks (horizontal axis) and US bonds (vertical axis). As you can see, 2022 falls in the most undesirable quadrant along with the years 1931, 1941 and 1969. Not only have stocks been knocked down, but so have bond prices as the Fed continues to hike rates at an historically fast pace.

What this means is that the traditional "60/40" portfolio – composed of 60% stocks and 40% bonds – now faces its worst year in 100 years, according to Bank of America.

My takeaway is that diversification matters more now than perhaps in any other time in recent memory. Real assets like gold and silver look very attractive right now. Real estate is an option. And Bitcoin continues to trade at a discount. Diversification doesn't ensure a positive return, but it could potentially spell the difference between losing a little and losing a lot.