END_OF_DOCUMENT_TOKEN_TO_BE_REPLACED

How public policies are scaring away private capital...

CAPITALISM relies on both capital and crisis, writes Eric Fry for the Daily Reckoning.

It relies on a continuous cycle of capital destruction and formation. In fact, in the exact same moment that crisis destroys the capital of one party, it attracts the capital of a new party. As such, the "dumb money" perishes and the "smart money" multiplies.

During the last five years, a lot of dumb money has perished. A lot more of it would have perished were it not for the aggressive market manipulations by "even dumber" politicians and central bankers.

By propping up failure, these professional meddlers also repel the fresh capital that would begin to heal what is broken. In other words, by propping up failure, the professional meddlers are preventing this particular crisis from producing the crisis-type pricing of assets that would attract a new generation of private capital.

At the same time, the meddlers have also "succeeded" in obliterating many of the laws and legal precedents that had guided the bankruptcy process in the US for more than 200 years.

The consequences aren't very pretty...as the chart below illustrates: 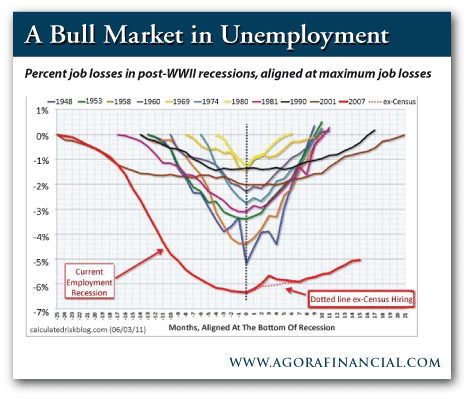 In terms of employment, the current US growth trajectory is the most pathetic "recovery" of the post-WWII era. The reasons are obvious (except to the meddlers):

No new capital, no new employment.

Despite these stark realities, the meddlers seem to have no "Plan B," other than to continue implementing the same old "Plan A" that has failed repeatedly. Plan A, as we know, consists of three principal tactics: suppress interest rates, print money, provide bailouts to incompetent bankers and bloated governments.

Time to make a Gold Investment?...