END_OF_DOCUMENT_TOKEN_TO_BE_REPLACED

This summer's 8.2% lull in Gold Prices raises a question...

WE GET this question a lot, writes Jeff Clark in Doug Casey's Gold & Resource Report:

"Should I Buy Gold now, or wait for a pullback?"

It's a valid question. For nearly two years, gold hasn't had a serious decline. There have been pullbacks, of course, but nothing assumption-challenging. In fact, since October 2008, gold's largest price drop is 10.6% (based on London PM Gold Fix prices), and yet the average of all declines greater than 5% since 2001 is 13%. The biggest pullback we saw this summer was 8.2% for Dollar investors.

Technically the summer's not over, but I'll admit I'm surprised we haven't had a better opportunity to Buy Gold at a discount.

So, is now the time to buy? It depends on your honest answer to another question:

"Do you own enough gold?"

By "enough" I mean an amount that lends meaningful protection on your assets. By "meaningful" I mean that no matter what happens next – another financial blow-up, accelerating inflation, crushing deflation, war, a plummeting Dollar, more reckless government spending – you won't worry about your investments.

Whether you should be buying gold now is almost irrelevant, in my opinion, if you don't already own a meaningful amount of the metal. If you earn $50,000 a year, how is one gold Eagle coin going to protect you if the Dollar plummets and sends inflation soaring? If your investable assets total $100,000, how is your nest egg protected by owning two gold Maple Leafs? This is all akin to buying an insurance policy worth $50,000 for a $500,000 home.

Today we face the prospect of prolonged economic stagnation, and most governments are administering grossly abusive monetary policy as a remedy. While some of the consequences are already being felt, the full ramifications have not hit your wallet yet. But they will.

If you don't have at least 10% of your investable assets in Physical Gold, or at least two months of living expenses, you have your answer: Buy. Don't use leverage, don't borrow money, and don't buy with reckless abandon, but yes, get your asset insurance policy and tuck it away. And then start working toward 20% (we recommend a third of assets be in various forms of gold in Casey's Gold & Resource Report).

Back to the original question: should we be Buying Gold now, or wait for a pullback?

The answer comes when you look at the big picture. If you pull up a 9-year chart of gold, what sticks out is that the price is near its all-time nominal high. One could be forgiven for thinking it looks toppy or at least ripe for a pullback. But I assert that the highs for gold have yet to be charted.

What will a gold chart look like after adding five years to it?

When projecting gold's potential price peak, there are many ways to measure it. Conservatively, gold reaching its inflation-adjusted 1980 high would have it topping around $2400 an ounce. More radically, if the US tried to cover its cumulative foreign trade deficit with its current gold holdings, gold would need to hit about $32,000 per ounce. 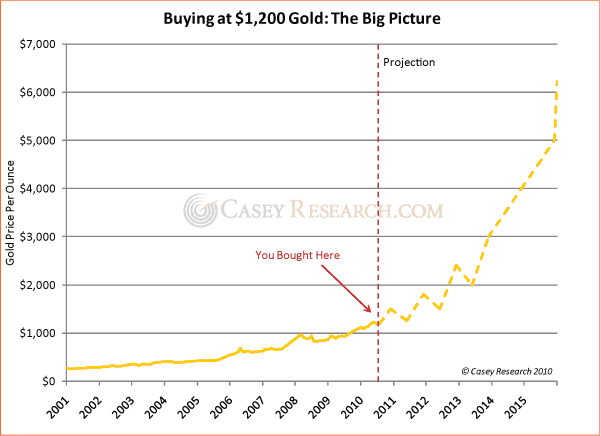 I'm not saying there won't be pullbacks or that you shouldn't try to buy at lower prices. Just keep a big-picture perspective. Let's say gold falls to $1100 and you're kicking yourself for having bought at $1200...if gold reaches $6200 an ounce, the profit difference between buying at $1200 and buying gold at $1100 is only 1.6%. If gold gets whacked to $1000 (at which point I'll be buying with both hands) the difference is still only 3.2%.

Heck, even if gold peaks at $2400, you still get a double from current levels. (But unless government monetary policies immediately reverse course, gold isn't stopping at $2400.)

So there's my answer. Yes, you have to accept my projection of gold's ultimate price plateau. And you have to sell at some point to realize the profit. But if the final chapter of this bull market looks anything like the chart above, I don't think you'll be too upset having bought at $1200.