END_OF_DOCUMENT_TOKEN_TO_BE_REPLACED

FOR THE FIRST TIME in several decades, some of America's most successful, big-name investors are Buying Gold, writes Chris Mayer in Daily Wealth.

David Einhorn, the hedge-fund manager who predicted the downfall of Lehman Brothers, recently bought gold for the first time. And then there is John Paulson, the guy who made billions of dollars by correctly anticipating the housing bust and credit crisis.

Paulson just plunked down $1.3 billion for an 11% stake in major gold miner AngloGold. He's also got a big position in Kinross Gold.

Peter Munk, the 82-year-old chairman and founder of Barrick Gold, also offers up his own anecdote about gold's broadening appeal:

"I have had more phone calls in the past six months than ever before – from people who have $120,000 inherited from grandmother, and from hedge fund managers with millions...

I am not saying George Soros, but people of that caliber have told me they are Buying Gold."

You no longer have to be a gold bug to think gold will rise in price. In fact, this buying by some of the world's greatest investors may be the leading indicator for a quick 116% climb – up to $2,000 per ounce or higher, I believe.

Why? The biggest reason is that the value of the US Dollar looks about as brittle as a 90-year-old's hip socket. And if you worry about the value of the Dollar – or any paper currency – then Gold Investment makes a good alternative.

In fact, gold has held up well while most everything else has taken a beating over the last year. On a recent conference call with investors, First Eagle fund manager Abhay Deshpande points out that gold just made a new high in just about every currency apart from the US Dollar and Japanese Yen.

"It has performed its job for everyone in these countries," he says. "It has held its value."

Take a look at the chart below and you can see the fall-off of the Dollar in recent years and the rise of Gold Prices. 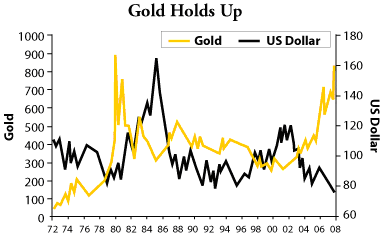 "But there have always been worries about the value of the Dollar," you say. "That's not new."

True. What is new, however, is a global financial crisis unlike anything we've seen in the post-World War II era. And that crisis has brought with it serious doubts – the most serious in decades – about the Dollar's ability to keep its top perch in the aviary of world currencies. As that doubt increases, Buying Gold attracts new fans.

It is easy to Buy Gold today, whether directly or in trust via exchange-traded funds (Gold ETFs). They are like mutual funds that hold gold. And as investors move into these ETFs, their gold holdings also go up.

It's one way to see the dramatic increase in demand for gold in just the last few quarters. 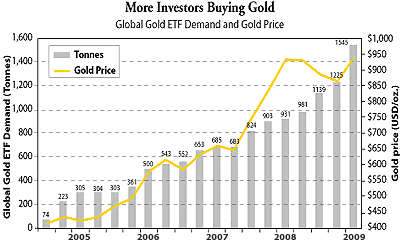 So we have to ask: At $900 per ounce, are all the fears baked in or are we on some new history-making path?

I have a good friend who advises institutional clients on investing. As he reminds me, the really big money hasn't started buying yet. There are no big pension funds or endowments with significant gold holdings. That could change. If so, the Gold Price will go wild.

"Gold is a small market," notes Barrick's Peter Munk. His career spans 60 years and he knows the gold market as well as anyone. Says he:

"Let's say a small percentage of the world's central banks – or simply the United Arab Emirates itself – do not believe President Obama's pledge that he will halve the US deficit by the end of his first term. They shift some of their dollar reserves to Buying Gold. It would not take many decisions of this kind to push the price above $2,000 per ounce."

That's how gold gets to $2,000 per ounce – just a bit of doubt turning into action. The mind boggles at what would happen if China decided to plow more of its gigantic currency reserves into gold. Gold could well hit $5,000.

And as long as President Obama, Fed chief Bernanke and their pals treat the Dollar like confetti, gold should continue to gather new fans.

The world financial order will not always hinge around the Dollar. Global finance will not always find its center on Wall Street. As Munk pointed out: "Look around Davos this year. So Goldman Sachs cancels its dinner party. In its place, a Kazakh company has a dinner party."

As the Dollar goes bust, who knows what will replace it? With gold, you don't have to worry too much about the answer.