END_OF_DOCUMENT_TOKEN_TO_BE_REPLACED

Private-investor market balanced, not panicked into buying gold or selling it...
GOLD BUYING amongst private investors in the developed West raced to the fastest pace in 3 years amid last month's Brexit referendum and financial shock, writes Adrian Ash at BullionVault.
Alongside however, existing owners chose to sell and take profits as the metal jumped in price like never before.
That squashed our BullionVault Gold Investor Index – which tracks the balance of buyers over sellers across the month – to a sudden 8-month low in June from May's 3-year high.
Because while the Brexit headlines make gold a must-have safe haven, earlier buyers already show a profit against the risks building in their other investments.
Almost two-thirds of June's gold sellers on the world's largest precious metals exchange online first bought at prices below the current multi-year highs. One-in-eight of June's gold sellers opened their BullionVault account earlier in 2016, using the award-winning exchange to take profits.
Gold prices have now risen 24% since New Year's Eve against the US Dollar, 22% against the Euro, and 37% against the Pound. 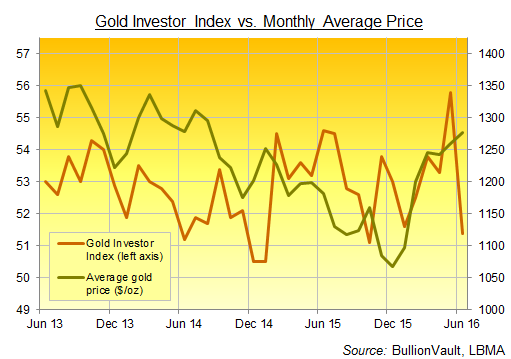 Dropping to 51.4 in June from May's 3-year high of 55.8, the Gold Investor Index fell last month at its fastest pace since Spring 2013.
A reading of 50.0 would signal a perfect balance between the number of investors starting or growing their gold holdings against those who reduced them over the month.
The number of people starting to use BullionVault for the first time doubled in June from its previous 12-month average, reaching the highest total since the precious metals price crash of April 2013 unleashed a wave of 'bargain hunting'.
But gold's jump to 2-year highs against the Dollar on June's Brexit vote – plus 3-year highs against the Pound and the Euro – also spurred the greatest number of sellers since BullionVault launched in 2005, jumping 148% from the previous 12-month average.
June's run-up to the EU referendum and result already made it a busy month for BullionVault. The number of first-time users rose 98% from the previous 12-month average, led by the UK (up 171%), the United States (up 52%) and Germany (up 34%).
Incoming referendum results on Friday 24 June then saw BullionVault users trade over £6.5m ($9m, €8m) of precious metals in 1,500 separate deals between midnight and the time the outcome was confirmed at 5am, three hours before the London Stock Exchange opened.
BullionVault's full trading volume that Friday reached £30m ($42m, €37m), smashing the company's previous 1-day record (£23m on 15 April 2013) with client trading outstripping two average weeks in total.
The online trading exchange – which is open 24/7 – then saw a further £4m ($5.5m, €5m) traded over the last weekend of June, when world stockmarkets were shut and traditional gold coin and bar retailers closed.
The following Monday, 27 June, then marked the strongest single day for new funded accounts at BullionVault since prices hit their all-time peak on 6 September 2011.
Despite the selling of late June, client gold holdings still grew month-on-month, adding 0.2 tonnes to reach a new month-end record of 35.2 tonnes – three quarters of it vaulted in Zurich, Switzerland, with London still the next most popular location, ahead of Singapore, New York and Toronto.
Overall between April and June, the net addition to client gold holdings was the strongest quarterly growth since Spring 2015 by weight at 0.8 tonnes.
Across June as a whole, gold sellers were split into three groups, with 29% having first bought below current prices before 2011, another 36% cutting their losses after buying at the peaks of 2011-2013, and the other third (34%) selling at a profit after buying as prices then bottomed in 2014-2015 and turned higher in 2016 so far.
So overall, the private-investor market for gold – as for buying silver – is well balanced, not panicked, after the Brexit price surge.
June saw a jump in the number of private investors adding precious metals to their portfolio, especially in the UK. More than twice as many had already acted in advance since the EU referendum was announced in February.
Those who haven't yet sold to take profits now hold a solid gain to help offset the risks and threats to their other assets, most notably the post-Brexit Pound.
New interest in gold from other regions has also turned sharply higher, led by US investors perhaps finding a warning of volatility in the Brexit vote for November's presidential election.
Attachments: