END_OF_DOCUMENT_TOKEN_TO_BE_REPLACED

Demand to buy gold set to rise after good monsoon in India...
I OFTEN talk about how the gold trade is really two separate trades, writes Frank Holmes of US Global Investors.
There's the Fear Trade, where people buy gold out of fear of war or poor government policies. This crowd sees the precious metal as a safe haven during times of crisis, such as when gold rose over the fear of a war in Syria, but eased when a much more limited military action became likely. 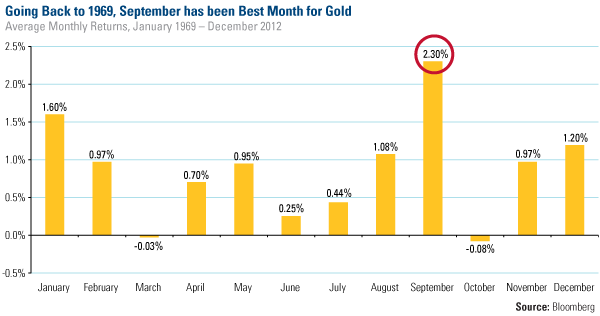 However, there are other factors beyond Syria this week driving gold. That's the Love Trade. This group buys gold to give as gifts for loved ones during important holidays and festivals. This is the time of the year that we are in the midst of right now.
Historically, September has been gold's best month of the year. Looking at more than four decades of monthly returns, the precious metal has seen its biggest increase this month, averaging 2.3%.
Indians will be getting to buy gold for their wedding season, which begins in October, followed by the five-day Hindu festival of lights, Diwali. That is India's biggest and most important holiday of the year. In December, millions of people will be gathering with loved ones to exchange gifts as they observe Christmas. And finally, millions will celebrate Chinese New Year at the end of January 2014.
In India, there's also the harvest season to consider, as its crop production relies on rainfall for water. One positive driver for demand to buy gold this year is the fact that the country has had a heavy monsoon. The rains that started in June covered most of India at the fastest pace in more than 50 years. About 70% of the annual rainfall in India happens from June to September, and a strong monsoon season usually means a bumper crop, which boosts farmers' incomes.
That could increase gold buying as well, negating the government's efforts to quell India's gold-buying habit. Historically, good monsoon seasons have been associated with strong gold demand.
"In 2010, the last year that rains were heavily above average, demand soared 37% in the fourth quarter after harvests," says Reuters.
In the rural areas of India, there is little access to banking networks, so gold is used as a store of wealth, says Reuters. And with half the population in India employed in agriculture, it's no surprise that 60% of all the gold demand in the country comes from these rural areas.
India's rural community has seen a "hefty rise" in income this year, reports Mineweb today. But instead of buying gold, Mineweb says Indian farmers may purchase land due to gold in local currency reaching "dizzying heights".
Particularly over the past few weeks, as the currency faced increasing weakness, gold in Rupee spiked. Over the past three years, gold is now up 58% compared to gold in the US Dollar, which rose nearly 12%. 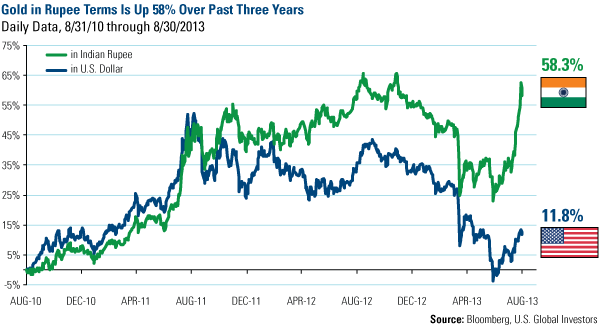 Despite this possible short-term threat to gold demand, keep in mind the East's long-term sentiment toward the metal. This area of the world has a different relationship related to both the Love Trade and the Fear Trade. And it's not easily broken.
You can see this encouraging sentiment in the chart below. People in China and India are well-known for buying gold. But they also have a "particular positivity around longer-term expectations for the gold price," according to market-development organization the World Gold Council.
In May and July, the World Gold Council asked 1,000 Indian and 1,000 Chinese consumers where they think the price of gold will be in five years. The two charts show the respondents' answers in May, when the average price of gold was about $1400, and again in July, when the average price of gold was $1200 an ounce. 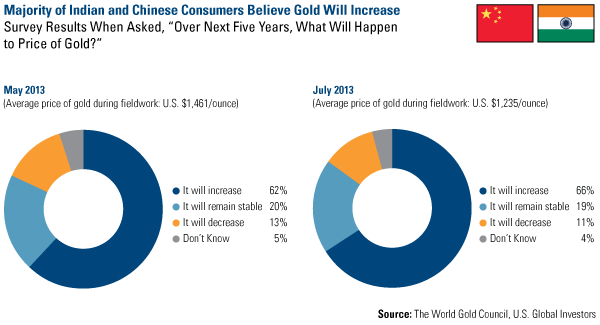 Overwhelmingly, consumers in India and China believe the price of gold will increase over the long-term. What's interesting is when you compare the responses between May to July, there's an "extremely resilient sentiment around the future trajectory of gold," says the World Gold Council. In May, 62% assumed gold would rise in price; in July, the number increased to 66%.
The survey also shows that there are not too many gold bears in the East. Only 11% of those who responded in July think the price will decrease.