END_OF_DOCUMENT_TOKEN_TO_BE_REPLACED

Gold Investor Index falls to pre-pandemic level...
PEOPLE tend to buy gold when they fear economic or financial turmoil, writes Adrian Ash at BullionVault.
No wonder then that, since the Covid Crisis began in February 2020, the number of people owning gold bullion has risen by nearly one third.
But it's also no surprise that new interest to buy gold has now fallen as vaccinations rise, re-opening expands, and risk assets led by equities and crypto set yet more all-time highs.
Prices for buying gold rallied in April, rising monthly for the first time in 2021. But global stock markets set fresh all-time highs, and the surge in Bitcoin and other virtual assets captured the investing headlines.
Upshot for gold sentiment?
April's balance of people choosing to buy gold over those selling it on BullionVault fell to the lowest since before the Covid Crisis began. 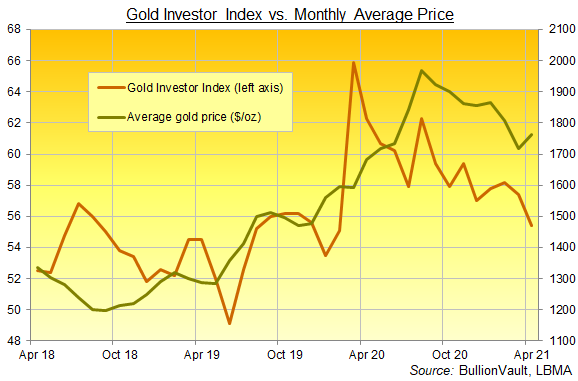 The Gold Investor Index is a unique measure of private-investor behaviour.
It tracks how many people buy gold rather than selling it on BullionVault as a proportion of all existing owners at the start of the month.
This world-leading marketplace now cares for $3.7 billion of allocated precious metals for more than 95,000 users from 175 countries, nine-in-ten of them (88.9%) living in the UK, Eurozone, US or Canada.
Last month the Gold Investor Index dropped 2.0 to 55.4, its lowest reading since February 2020, eve of the pandemic shutting economic and social activity across Europe and North America.
In March last year the Gold Investor Index leapt to 65.9, its highest level since September 2011. A reading of 50.0 would signal a perfect balance between the number of buyers and sellers across the month.
Even so, private-investor demand to buy gold remains firmly above pre-Covid volumes, and while stock markets are priced for a historic boom, the number of people holding gold as a way of spreading their investment risk continues to grow.
Although the Gold Investor Index eased back last month to dip below the pre-Covid peaks of autumn 2019, it remained 1.5 points above the 3-year average prior to 2020.
Net gold demand also held firm by weight in April, rising almost 5-fold from March's 14-month low to reach more than 120 kilograms.
That took total client holdings – all secured and insured in specialist vaults in each user's choice of London, New York, Singapore, Toronto or most popular Zurich – to a new record of 46.7 tonnes worth over $2.6bn (£1.9bn, €2.2bn, ¥289bn). But April's inflow was still only a fifth (21.8%) of last year's record average.
The number of new precious-metals investors also fell in April to its lowest since February 2020, dropping 29.3% from the previous month's count of new buyers and halving (-50.8%) from last year's record monthly average.
Again however, that was still stronger than the pre-Covid average, coming 57.7% ahead of the 2017-2019 average pre-Covid, led by 62.1% growth across the 19-nation Eurozone.
The number of people owning gold now stands 30.4% above the level of February 2020, eve of the Covid Crisis, while the number of people owning silver has risen by 56.5%. 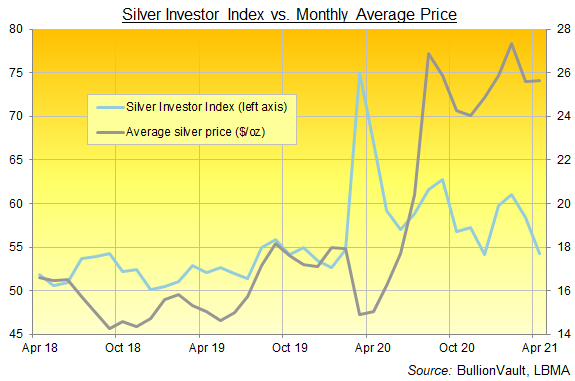 The Silver Investor Index fell in April to a 4-month low, down from 58.4 to 54.3 as February's 'Reddit Ramp' on social media continued to fade.
As with the Gold Investor Index that remained above the pre-Covid average (52.6 across 2017-2019). But also like gold, the number of private investors ending the month with more silver than they began fell to the fewest since February 2020.
Again net demand was positive by weight, reaching 10.7 tonnes and taking total client holdings to a new record of 1,193 tonnes worth $992m (£713m, €821m, ¥108bn).
Platinum demand was also positive, totalling 28kg and taking client holdings of the white precious metal further above 1.8 tonnes – just shy of December's record – with a value of $72m (£52m, €60m, ¥8bn).
First added to BullionVault in spring 2017, platinum – like silver – has many key industrial uses, not least in green energy and technology.
That makes the post-pandemic outlook for an economic rebound and a boom in post-carbon infrastructure bullish for underlying productive demand.
But the true scale of the pandemic's economic damage remains almost as uncertain as plans for reducing today's record high central-bank stimulus or government debts.
No wonder that a record number of people buying gold – and looking to cut their costs while ensuring the strongest security and convenience – now own it on BullionVault.
Attachments: