END_OF_DOCUMENT_TOKEN_TO_BE_REPLACED

BEAR RAIDS have been a part of the US stock market's folklore for more than a decade, writes Gary Dorsch at Global Money Trends.

Throughout history, investors have blamed short sellers for some of the worst crashes in the world's financial markets. Jesse Livermore was said to have pocketed $100 million in profits from shorting the stock market during the Crash of 1929. Before his death, Livermore wrote a book titled, "How to Trade in Stocks", in which he described the dynamic of a "Bear Raid" as follows:

"The theory is that most of the sudden declines or particular sharp breaks are the results of some plunger's operations. The excuse for losses that unfortunate speculators so often receive from brokers and financial gossipers serves merely to keep you from wisely selling short.

"The natural tendency when a stock breaks badly is to sell it. There is a reason – an unknown reason but a good reason; therefore get out. But it is not wise to get out when the break is the result of a raid by an operator, because the moment he stops, the price must rebound."

Jesse Livermore famously warned his readers that "the stock market is designed to fool most of the people, most of the time."

Yet "All through time, people have basically acted and re-acted the same way in the market as a result of: greed, fear, ignorance, and hope – that is why the chart patterns recur on a constant basis."

This axiom has withstood the test of time, and the recurring pattern of a plunging market, as a result of a Bear Raid, and followed by an equally quick recovery rally (short covering) has been played out on numerous occasions on Wall Street.

"Bear Raids" are sudden, sharp panic attacks that frighten many investors into selling their shares in order to avoid losses to their retirement accounts. During a "Bear Raid" quick-footed short sellers seize upon negative developments or news reports that are largely unexpected, or "Black Swan" events that are far outside of the realm of probabilities.

The objective of a "Bear Raid" is to make windfall profits within a brief time period through short sales. If the Bear Raid is successful and the target stock plunges, short sellers can buy the shares cheaply on the open market. These shares would be used to replace the ones that were borrowed earlier and sold at a much higher price, with the short sellers pocketing the difference as their profit.

Earlier this month, Bear Raiders figured it was an opportune time to trigger a downturn in the equity markets, given that the S&P500 index hadn't experienced a -5% pullback for 404 trading days, the longest winning streak in history.

Furthermore, the SPX hadn't experienced a 3% pullback for 311 trading days, also the longest winning streak in history. Retail investors were plowing record amounts of their savings into the market at the tail end of a parabolic rally, and leaving themselves with very little room for error in the high stakes poker game.

Then on January 29th, Goldman Sachs told the media that "correction signals are flashing" and advised its clients to prepare for a correction . 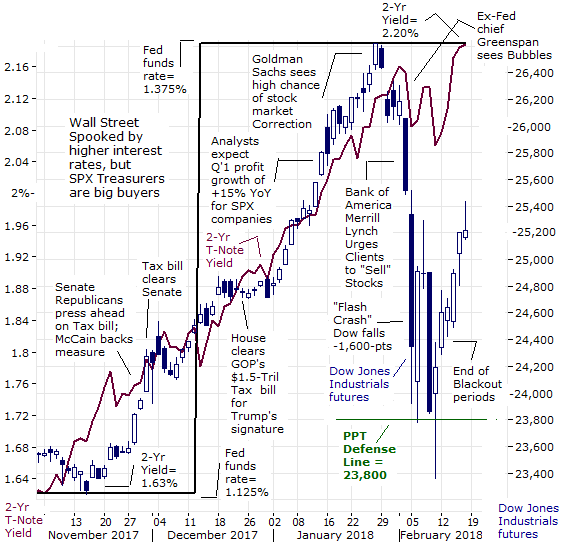 "Whatever the trigger, a correction of some kind seems a high probability in the coming months," warned Peter Oppenheimer, chief global equity strategist at Goldman Sachs.

"Our Goldman Sachs Bull/Bear Market Indicator is at elevated levels, although the continuation of low core inflation and easy monetary policy suggests that a correction is more likely than a bear market."

On February 2nd, Bank of America Merrill Lynch advised clients that it was time to "sell" amid a session that saw the Dow Industrials lose 450 points in early trading.

Some $102 billion poured into equity funds since the start of the year, already more than a third of last year's total of $280 billion. The firm's strategists warned overheated bullishness tripped its "sell" indicator. The indicator has accurately predicted 11 out of 11 corrections since 2002, BAML strategists said.The average peak-to-trough decline in equities was 12% after the signal was triggered.

As fate would have, the Bear Raiders had timed their scheme with perfect precision. The following trading day, on February 5th, the Dow Jones industrial index suffered its biggest single-day point drop in history, plunging nearly 1,600 points during trading hours before recovering. Officially the Dow fell as much as 1597 points for a 6.3% decline in what was identified as a "Flash Crash", the third of its kind since May 2010.

The Dow recovered 420 points of that decline as the day headed toward the closing bell in New York. It was still the worst day for US stock markets in 6-.5 years. Roughly $1.25 trillion was briefly wiped from the value of US- stocks in the frenzied selling. The 4.1% drop in the S&P 500 Index left the market cap of US-stocks at around $29 trillion. That was enough to undo all the market capitalization added to equities in the aftermath of the Republican tax cuts.

However, thanks to the massive tax cuts for US-corporations, the SPX companies have announced $171 billion of stock buybacks, so far this year. That's a record-high for this point of the year and more than double the $76 billion that Corporate America disclosed at the same point of 2017. Wall Street loves buybacks because they tend to boost the share price in part by inflating a key measure of profitability.

In just the next three days, Cisco (CSCO), Pepsi (PEP) and drug maker AbbVie (ABBV) promised a total of $50 billion of buybacks.

A survey by Morgan Stanley found just 13% of SPX tax cut savings will go to increasing workers' wages, bonuses or benefits. 43% will reward investors with stock buybacks and dividends. For the 12-month period ending Sept 2017, SPX companies spent $932 billion on buybacks and dividends, or roughly 92% of their combined $1 trillion of operating earnings.

Since 2009, SPX companies have spent a total of $3.8 trillion on buybacks. They are indiscriminate buyers, and willing to pay any price to buy back their shares, and are always happy to buy shares on bigger than usual dips. According to Goldman Sach's proprietary data, on Feb 5th, share buybacks by its corporate clients surged to the highest level since the previous Flash Crash in August 2015, as companies exited blackout periods and stepped into the market to buy back their shares with a vengeance.

So SPX companies have moved forcefully to snap up their own shares in the open marketplace, and provided the fuel for the sharp 5% rebound in the US stock market as they are riding on a wave of strong quarterly earnings reports, and thanks to recent tax cuts, are armed with even more cash on their balance sheets.