END_OF_DOCUMENT_TOKEN_TO_BE_REPLACED

WE'RE ABOUT nine years into the economic recovery following the Great Recession, writes Frank Holmes at US Global Investors.

It's been an extraordinarily profitable period for the stock market – one of the best in US history – and I hope you've participated.

But every bull market ends with a bear market, and while no one knows for sure when that will be, it's probably safe to assume we're in the final stretch.

In its June outlook of the US economy, Spanish bank BBVA put the probability of a recession in the next 12 months at 16%, up from 5.2% in January. That's the highest figure since 2016, when financial markets grew restless in anticipation of the US presidential election. Before that, the model was last highest right before the crisis a decade ago.

The question you should ask yourself now is: Am I well positioned to withstand the next recession or bear market?

The thing is, after nine long years, many of us might have lost the muscle memory of what a bear market feels like, or how to adjust our portfolios accordingly. Some of you reading this might be too young to have ever experienced a major contraction.

In that case, here's a sobering reminder: 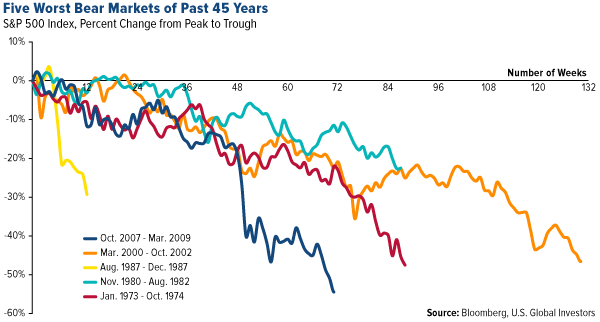 Not counting corrections, or declines of between 10% and 19%, there have been five major stock bear markets in the past 45 years.

On average, they've given up more than a heart-stopping 40%. That's what you could have expected to lose had you been invested only in domestic stocks, with no exposure to precious metals, commodities, bonds, foreign markets or other asset classes.

Not only that, but in the two most recent bear markets, you would have had to wait between six and seven years just to claw back to a breakeven price.

This should be disquieting to anyone. Nearly every mutual fund investor surveyed in a 2017 Investment Company Institute (ICI) study said that retirement was a financial goal. Three quarters said it was their primary financial goal.

A bear market could seriously clobber a poorly positioned portfolio and wreck a person's retirement plans. 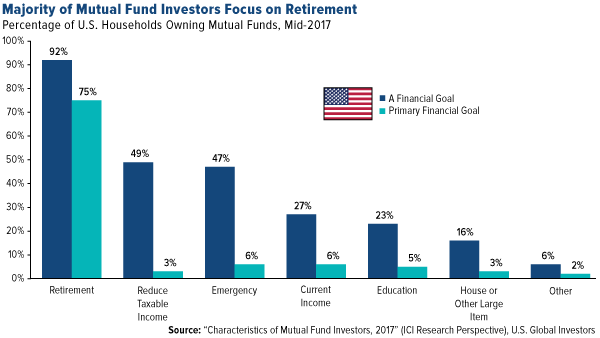 If you're in your 20s and 30s, you still have time to recover. But if you're close to retirement, or already retired, the idea of waiting six or seven years to get back what you lost is unthinkable.

It's for this reason that baby boomers could especially be at risk as we head into the end of the business cycle. Look closely at the chart below. Baby boomers, or those born between 1946 and 1964, are not only the largest mutual fund shareholder group (37%), they also hold the largest percentage of mutual fund assets (50%).

The entire US mutual fund industry, by the way, is currently valued at $18.7 trillion. That means the baby boom generation owns something like $9.35 trillion – a mind-boggling sum.

Granted, this leaves out other investment vehicles – ETFs and hedge funds, for instance – so it doesn't show a complete picture of who owns what. And obviously there's a wide variety of mutual funds, from aggressive equity growth funds to less risky government bond funds. But the chart above should nonetheless make the point that retirement-bound and retirement-age baby boomers could be most at risk should a Great Depression-caliber bear market occur tomorrow.

So how should you position your portfolio to soften a potential heartbreak?

When people hear "municipal bonds," their eyes sometimes glaze over. Compared to hot tech stocks or cryptocurrencies, munis can be a little...sleepy.

That's the point. Munis are there not necessarily to grow your capital, but to preserve it.

Because of their attractive risk-reward profile, I think muni bonds could act as the bedrock of a US investor's portfolio – especially the closer they get to retirement age, and especially as we near the end of this cycle.

But to get the sort of risk-adjusted returns you might be seeking, it would be important to focus on short-term, high-quality, investment-grade munis and muni bond funds. I like to stay mostly in the one-year to five-year range, and A-rated or higher. Going further out on the yield curve or down the credit-quality ladder might increase returns, but it could also strip away the diversification benefits – which would defeat the purpose of holding them in the first place.

As for allocation, a good rule of thumb is to increase your weighting the older you get. Early in your career, 20% to 25% might be ideal, depending on your situation. Later in life, it might make sense to readjust to 50% stocks, 50% bonds.

That way, you could better manage the risks inherent in the next bear market with confidence.