END_OF_DOCUMENT_TOKEN_TO_BE_REPLACED

Warren Buffett says he doesn't like gold because it doesn't do anything or go anywhere. But that is precisely the reason for Buying Gold...

FOR VALUE investors of a certain age (e.g. mine), discovering that Warren Buffett has feet of clay is like suddenly not believing in Father Christmas, writes Tim Price on his Price of Everything blog.

This twinkly-eyed, raspy-voiced, avuncular old gentleman almost embodies Clint Eastwood crossed with a Care Bear. And nobody can hold a candle to his long-term investment record. And yet...

The rot set in (at least as far as this writer is concerned) when Buffett went from investing in private non-financial businesses to siding with the establishment, using his institutional heft to win sweetheart deals in dubious banking institutions way beyond the reach of regular Joes. In other words, somewhere along the line he went from representing the 99% to representing the 1%. And at the first sign of trouble, he simply wraps himself up in the American flag.

Buffett's latest advertorial (for himself and for Wall Street), 'Why stocks beat gold and bonds', adapted from an upcoming version of one of his legendary shareholder letters and published in Fortune, may be the most irritating thing he's ever written (or had written for him).

As an investor he rightly draws attention to the critical requirement to maintain one's purchasing power in the face of rampant state inflationism. He accurately highlights the staggering reduction of real value in the US dollar since 1965 (some 86%) as a result of overmuch dependency on the printing press. He fairly declares a dislike for currency-based investments in a world of rapidly inflating, unbacked fiat money. And he then goes on to rubbish gold, of all things, using the tired and specious argument that purchasers are simply displaying 'greater fool' theory, eagerly awaiting new rises in price that will suck in new purchasers ad infinitum.

It looks suspiciously and ironically as if Warren Buffett, for all his undoubted investment success, has never actually studied any monetary history. We know that he has speculated in silver in the past, and that the experiment did not end fantastically well. He concedes that gold has industrial and decorative utility, but also states that "if you own one ounce of gold for an eternity, you will still own one ounce at its end." Erm, that's kind of the point.

A straw man argument gets wheeled out that a pile of inert gold cannot hope to compete in terms of productive utility with a pile of farmland and Exxon Mobil stock of the same nominal value. To which one is surely entitled to respond, WTF ? It would be surprising and not a little alarming if anybody who has ever purchased gold did so with the expectation of eating it, or using it as fuel. Buffett would be on stabler ground if he made an intellectually valid comparison between gold as a store of value and, say, a big pile of T-Bills of the same nominal value – or of the same US dollars he has already identified as a more or less guaranteed loser over anything other than the very, very short term. But this is an exercise in sleight-of-hand, of conflating utterly disparate assets with wildly different underlying investor objectives, only to pluck a sheaf of blue chip American stocks with a flourish out of the hat, and to noisily declaim against anyone with the temerity to even dream of going short America or its mighty stock market.

If gold is a bubble, it's difficult to know how to describe something like US Treasury bonds. "Crap" would be a start, though. The credit specialists at Stratton Street point out that the amount of marketable Treasury securities outstanding last month topped the $10 trillion mark. But even as their supply was dislodging roof tiles, their average yield – across all maturities – fell to just 0.9%. US consumer price inflation, which we will take at face value rather than presume is grotesquely manipulated, stands at 3% year-on-year. Do "investors" in US Treasuries – including Warren Buffett – have any idea what they are doing ? To his credit, he acknowledges that "bonds should come with a warning label," but in displaying such commitment to T-Bills in the Berkshire portfolio he does appear to be fetishizing liquidity over, say, any hope of a meaningful return.

The reason why Buffett's views of gold should be ignored can be seen in the following charts, all courtesy of James Bianco at Bianco Research. The first shows the extent to which the central banks of China, the ECB, the US and Japan have allowed their balance sheets to explode, in a desperate attempt to compensate for banking and private sector deleveraging since the debt crisis began: 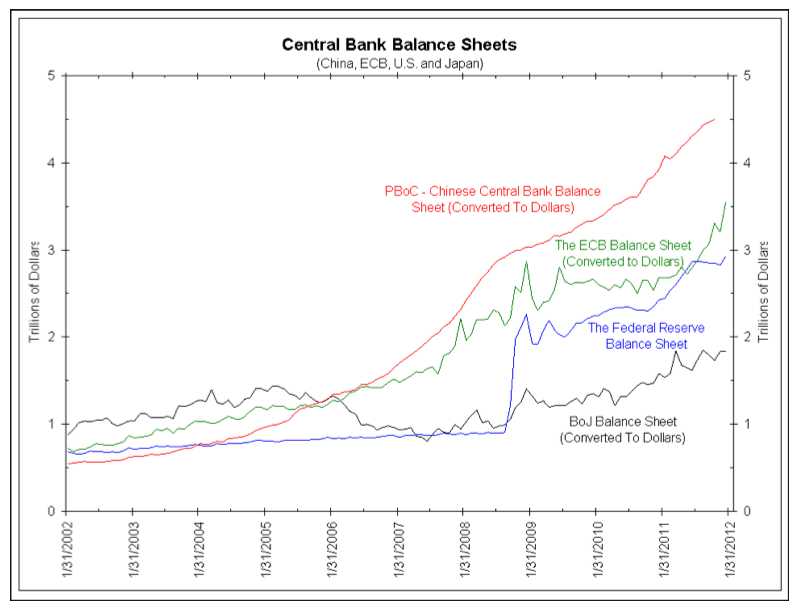 As Bianco points out:

If the basic definition of quantitative easing (QE) is a significant increase in a central bank's balance sheet via increasing banking reserves, then all eight of these central banks [the others include the Bank of England, the Swiss National Bank, the Banque de France and Germany's Bundesbank] are engaged in QE.

What's particularly shocking about the data is that while every major central bank is busily printing money like it's going out of fashion – which it is – one of the biggest culprits is the one most widely associated with sound monetary policy, namely the Bundesbank, which has been one of the biggest inflationists of all: 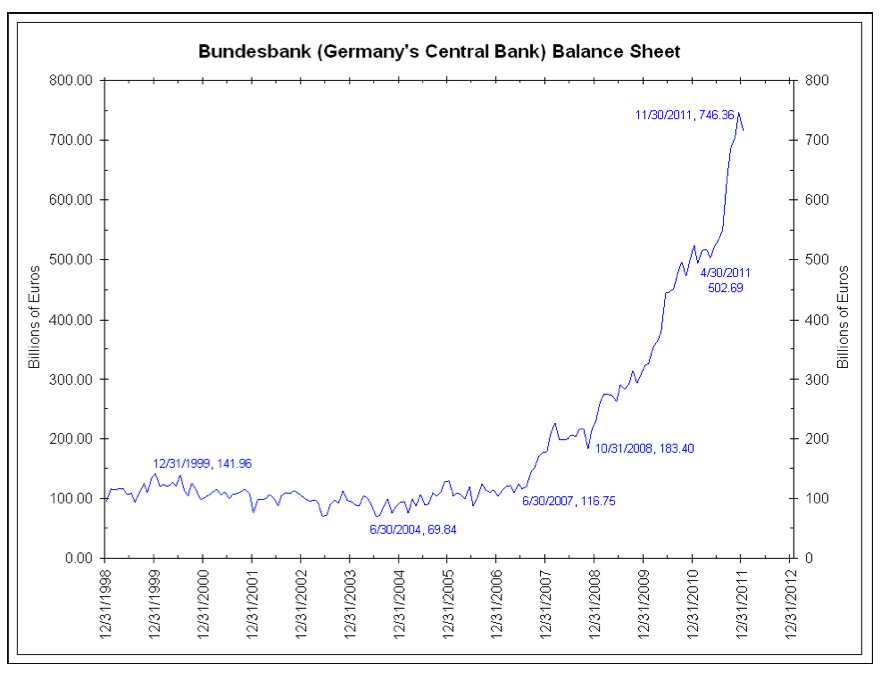 The full piece, together with charts that show desperate inflationism for the central bank of your choice, can be found here. The combined size of the Big 8 central banks' balance sheets has almost tripled over the last six years, from $5.4 trillion to more than $15 trillion and still rising. That $15 trillion compares with the capitalisation of world stock markets which stands at $48 trillion. The Big 8 central banks now account for the equivalent of one third of world stock market capitalisation. Investors buying stocks now may well be doing so because they anticipate more QE – which they are more or less certain to get, given that most of the West is turning into Japan. But their preference for equity investment may have nothing to do with expectations regarding things like economic growth or revenues or profits, just money printing. That may not be 'greater fool' thinking, but it is not founded on sound economic reasoning, rather simply shifting capital into an ever-rising pool (albeit of continually depreciating money). Since governments and their central banks maintain a monopoly for the creation of the money we use, devaluing it as aggressively as they now are is like forcing investors into a blind alley and then setting fire to the alley. Perhaps we should be thinking outside of the current monetary box, as we do seem to be caught in a new and disturbing paradigm.

Warren Buffett is not the only institutional investor to be offering unsolicited investment advice. Blackrock chairman and CEO Larry Fink, recently interviewed on Bloomberg television, gave a guarded opinion on asset allocation:

Interesting. I wonder if Blackrock, as a $3.5 trillion asset manager, has anything we could buy?

This debate is in danger of getting overly simplistic and just a little polarised. Just because US Treasury bonds (and UK Gilts, and German bunds) no longer represent anything approximating to real value does not automatically validate equity as the 100% alternative. Buying into a rising market is fine, but what happens when central banks stop filling the bath or, worse still, take the plug out or, worse yet, find that they are no longer in control of the water ? We take a more nuanced perspective, and in addition to holding high quality non-Anglo Saxon sovereign and investment grade debt (yielding more than 6% to boot), we hold selective high quality equity investments, but also completely uncorrelated trading vehicles, and precious metals. The investment world does not come down to an all-or-nothing decision between debt (mostly rubbish, now, admittedly) and equity. While the bigger picture is fraught with monetary mismanagement in response to a grave crisis, there are plenty of other investment choices out there, and a growing fundamental argument underpinning the ownership of real assets. Perhaps we are naive in expecting some of the world's largest (traditional) asset managers to acknowledge the truth. The investment world is not limited to a binary choice between (expensive, risky) debt and (in many cases expensive, and just as risky) stocks.

Buying Gold? Get the safest gold at the lowest prices with BullionVault...