END_OF_DOCUMENT_TOKEN_TO_BE_REPLACED

Made you look, made you stare...
BUFFETT buys a copper stock! shouts Gary Tanashian in his Notes from the Rabbit Hole.
Just kidding. Warren Buffett's Berkshire Hathaway may or may not own copper stocks. I did not dig deep enough to find out. For the purposes of this post it does not matter.
With the Buffett Buys a Gold Stock! hysterics last summer, the subsequent (and inevitable) fallout and the Buffett Pukes a Gold Stock! resolution, you never know.
It's worth asking the question about what sort of investors are now true-believing in copper and the industrial metals where once upon a time last summer gold was the object of affection.
Look, the contrarian dynamics in play now are 180° from where they were last spring, coming out of the deflationary crash, when we first started to get a handle on and act upon the coming inflation aimed at reflating the economy. NFTRH has used a lot of indicators, starting then and continuing today to be on the right (inflationary) side of this macro dynamic. With all due respect and foresight about macro decision points to come, we remain on the inflationary side today.
Hence, gold is on the outs relative to cyclical assets subject to inflation/reflation, as it should be during such a phase... 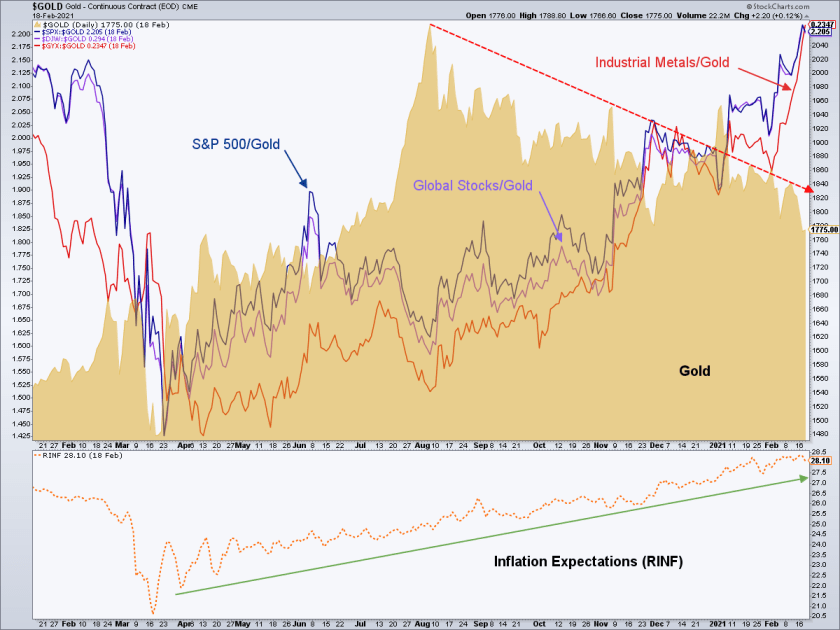 Copper is thrusting upward in the cyclical bull market it broke into a few months ago... 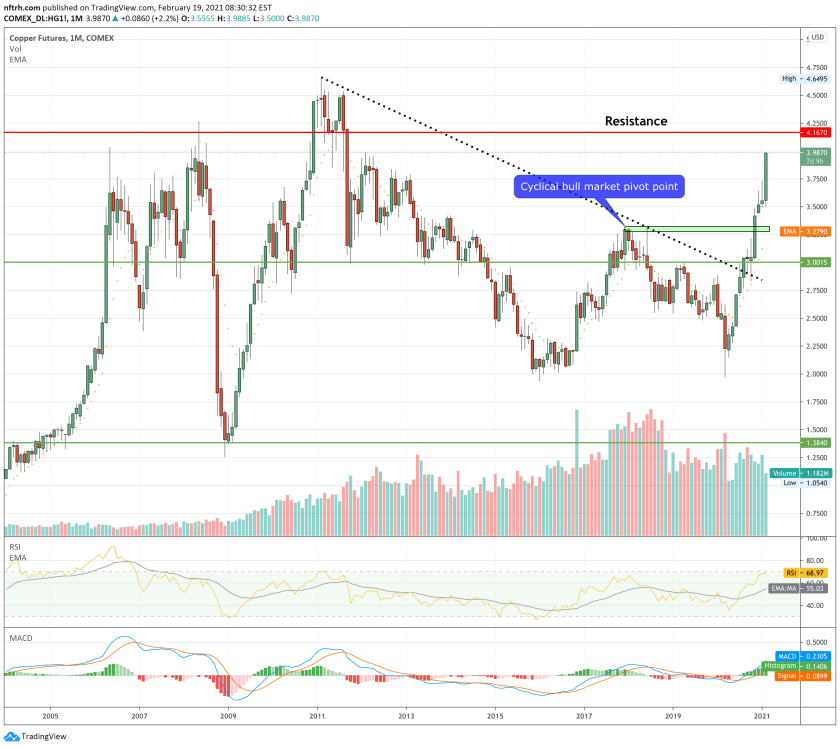 The CRB Commodity index is starting to poke through a very important long-term resistance area...

So Buffett bought a gold stock at the top and sold that same stock, Barrick Gold, as the gold stock sector enters the final stages of its correction, which may end in a typical capitulation (we are updating the process and HUI targets in NFTRH updates and individual miners in NFTRH reports).
Even at a new cycle low today, HUI has not yet touched the most optimistic of the open downside targets. But I am sure a healthy number of subscribers are in a position of anticipation because there really is nothing new under the sun.
When ole' Warren bought Barrick last summer, the foremost bull horns in the gold "community" could not wait to broadcast, admonish and tout the news. Warren Buffett...ooh! It was a classic indicator of caution.
And so here we are today, with the macro flipped at a 180°. Wise guys far and wide are advising about how far the inflation-fueled bullish train is going to run. Whether focused on Copper/China, broader industrial metals or my personal favored areas of clean energy/battery metals and materials, everybody is on the Cyclical Inflation Express (as printed by the Fed (monetary) and deployed first by the Trump admin and now by the Biden admin (fiscal)...).
As implied in the previous sentence, that most certainly still includes me, and thus, NFTRH.
But we did not luck into the inflationary reflation early on. We did the work to be ready for it and understand why it was the most likely scenario. The upcoming decision point will be just that, a decision point. The herd looks smart now just as those bearish herds did against the deplorable backdrop coming out of the Covid-crash last March. But that is not how markets work.
At the upcoming decision point, this inflation is either going to get off the hook and morph into one for the ages or it is going to fail once again. Doctor Copper is riding high now and gold is on the outs. It's a perfect setup. Either way, gold will have utility. Meanwhile, it works through a healthy correction.