END_OF_DOCUMENT_TOKEN_TO_BE_REPLACED

Copper, the Nikkei, the Yen in reverse, silver...

AFTER Alan Greenspan gave them the playbook (Credit & Debt Manipulation 101), now Ben Bernanke and global inflators everywhere have taken the ball and run with it in new, innovative and levered up ways, writes Gary Tanashian in his Notes from the Rabbit Hole.

Actually it's a game of Whack-a-Mole and they play it well, these inflating moles. The minute you think you're going to drop the hammer on one of their heads, he's gone and another one pops up elsewhere.

So how can we follow all the data points that hands-on, manipulative policy has introduced and forecast conclusions with accuracy? The answer is that it is difficult in the short-term, but in the long-term we are all dead anyway, so we might as well use some inflationary bubbles of the past as a road map to what may be ahead.

There are currently several bubbles (and one anti-bubble: gold) in play over varying time frames. These bubbles are the direct result of policy actions. Last weekend we reviewed the bubble in Japan's Nikkei in relation to its policy-induced crashing of the Yen and then last week wouldn't you know that the Yen caught a bid and the Nikkei suffered an incredibly bearish day?

That was the first impulsive hit. The Nikkei could well go back up to test the highs, but something seemed to kick off over there in the Land of the Rising Sun. Don't fall for calming talk across global markets. It appears the first big moneyed interests got the hell out of the Yen bear trade and the Nikkei bubble trade last week.

They reflected hot money that has been given permission to speculate and drive up prices. But this hot money, newly created and pumped into the financial system does little for the real economy. It transforms debt into vehicles for speculation within the financial sphere, with the first users being the most privileged with respect to coming policy.

In other words, the financial entities that put the money to work first and most profitably have been given the playbook ahead of time. Let's be realistic about this. That right there disqualifies Bernanke and Co. from any respect in my book. The system is stacked and speaking as an American, is bad for most of America. You may have similar or contrary feelings about the policy of your country or union, depending on where you live.

Never before have the few rich been so targeted for further enrichment and the many of modest or little means targeted for further degradation. Meanwhile the hype is that we have a Socialist in the White House. Well, why do you think he is there and why do you think his agenda is so popular? I guess this is how a screwed up society redistributes some of what its corrupted components have horded

The entire post-2000 play has been to financialize the economy to keep it going. To financialize something, you need money. To print money you need to put up more credit and so on and so forth. We know that under Greenspan the US had a convenient partner in China, as the US printed up a bubble in commercial credit and sent the consumer out there, credit card in hand to buy up all sorts of cheaply made goods. This helped build China's infrastructure and pump commodities. That was the play; as inflation 'got out there' it took advantage of the 'China build out' hype and pumped strategic commodities.

This time around, a different mole has popped up and it is not one that the commodity gurus and gold bugs favor as it leverages the deflationary pressures in many parts of the world, and contains commodity prices. But the money has to go somewhere and a stock market with a Goldilocks story of 'just right' economic and policy conditions carries the day.

So in our twisted macro scenario, good is bad. Mediocre is good and bad will still be bad after the current phase passes. Last week the economic numbers were biased positive and the Fed was on full Jawbone with Huey, Dooey and Louie speaking and the last FOMC minutes were released to boot. An over bought market running with the cult of easy money had a little case of the jitters.

That is because the financialized markets do not give a damn about what is good for their host countries or the average person. They are fixated on big mouth bankers in high places who feel they have the right to use monetary magic tricks to direct how the rest of us proceed with our financial affairs. They have withdrawn our free market in favor of something they manage as if it were just another government agency overseeing a given area for the public good. It is FrankenMarket and it does not want what is good for America; it wants what is good for it.

At the end of last week some inconveniently strong economic data came in on the heels of the jawboning Fed. Weekly jobless claims were down, home prices were up strongly with sales, and durable goods order reversed a big chunk of the previous month's drop.

This all paints a picture that puts the Fed in a position to have to answer the question "why are you taking yield from fixed income investors to reward risk takers if with the Dow above 15,000 and the economy strengthening?"

The answer is that something of mocked up origins must be defended to the hilt because it was not born of natural means and its Achilles Heel lurks somewhere within the layers of leverage that has brought us to this point in a confusing macro backdrop.

US manufacturing activity for instance is just right. It is going nowhere but is not declining impulsively. A question we might want to ask right here and now is how long will it keep up its lame growth if the Dollar keeps appreciating?

A hard rise in the US Dollar would croak the manufacturing sector. What happens then, a return to the China labor outsource arbitrage gimmick? That is waning as China's underpaid workers are slowly being converted to consumers with financial means.

Japan's Nikkei is a hockey stick. 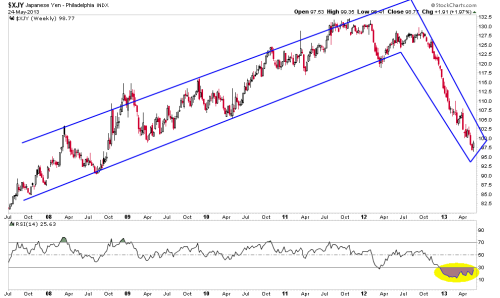 Japan's Yen is a hockey stick flipped over. 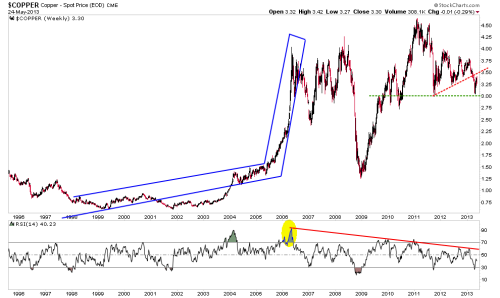 Copper was once a hockey stick and has gone nowhere – subject to massive ups and downs, compliments of the financialized economy – since. 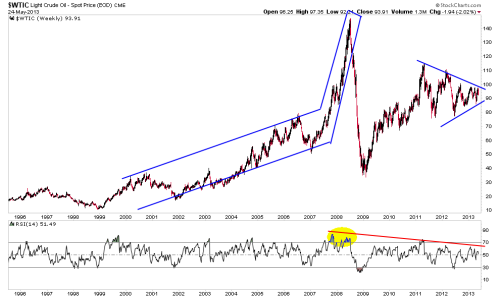 Crude oil was a hockey stick that got members of congress squabbling and hand wringing about how to control the evil speculators that drove the price up to such debilitating highs. Remember? The bubble was actually compliments of Alan Greenspan's out of control credit policies, which I'll bet not one of those bozos sought to blame back then. 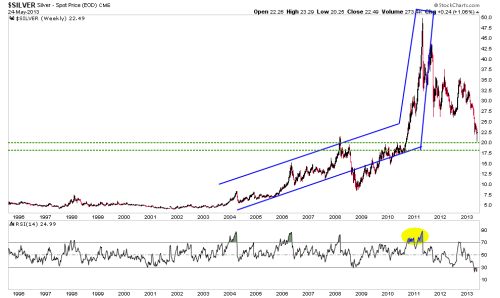 And finally, we have the silver hockey stick, which formed a huge blade right into the conclusion of the last inflationary phase and commodity blowout.

Bottom line on the games of whack-a-mole and bubble hockey?

With the modern way of doing things, money is created and set free to go where it will go within the structure of the global economy. Sometimes its inflationary effects will pop up here and sometimes there. Early last decade it was freed up to create a commodity bubble that attached itself to the 'China Story', which was itself a manifestation of the US-China cooperative experiment in credit creation and consumer spending.

There is Paul Krugman; he of the respectable platforms at the New York Times and Princeton and there has been Larry Summers; he of the respectable platforms at the US Treasury and Harvard. There have been a thousand others throwing their hats into the ring, speaking intelligently as if they are anything but promoters of an unproductive system that issues credit and creates new money out of nowhere toward its ends.

It is not a natural economic path. There will be resolution to the hockey stick forming in the Nikkei. The US and other global markets that have launched rallies through inflationary monetary policy along with the Yen's fall should be affected as well. As we have shown each week, there has been a great wall of sentiment-fueled rationalization erected as to why the new bull atmosphere is real and sustainable. Did the first brick pop out of that wall last week with the Nikkei's 7%-plus decline in a day?

The "anti-bubble" is the hockey stick pointing downward toward hell that is the current view of most market participants toward an anchor to honest monetary systems. Namely gold.

Think about this for a moment; creators of paper and digital money (i.e. credit) have got the global investment community eating out of their hands in service to asset speculation (in this case, equities) and in utter revulsion toward the anti-market to all of this chicanery, gold.