END_OF_DOCUMENT_TOKEN_TO_BE_REPLACED

But derivatives + rate curve suggest financial deepening...
BITCOIN came into existence in January 2009, says Colin Lloyd of the Asian Alternative Investments Network and macro-letter The Long Run, writing at the Cobden Centre.
It was not the first 'cryptocurrecny' and there are now an estimated 950 competitors, with new ICO's 'Initial Coin Offerings' appearing almost daily.
BTC's closest rival in terms of coins in circulation is Ethereum (ETH). The chart below shows how these currencies % of total market capitalisations has waxed and waned. 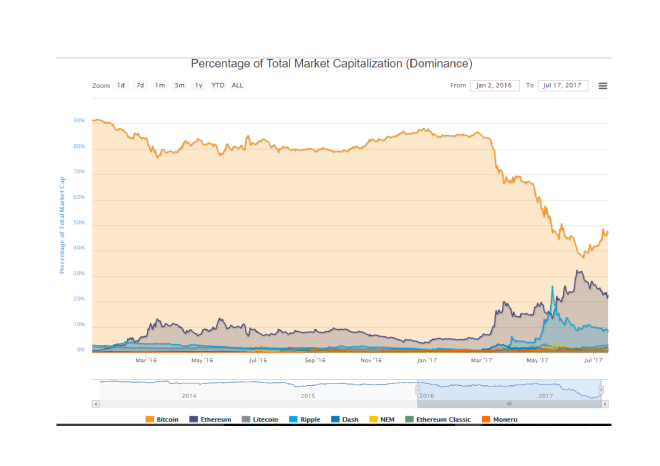 I want to concentrate on BTC since it remains the market leader with a total circulation of $33bln (reference BTCUSD 2000) whilst the outstanding issuance of its nearest rival ETH is $16bln.
Below is a four month chart of BTCUSD. Its price has fallen by almost one third in just over a month. 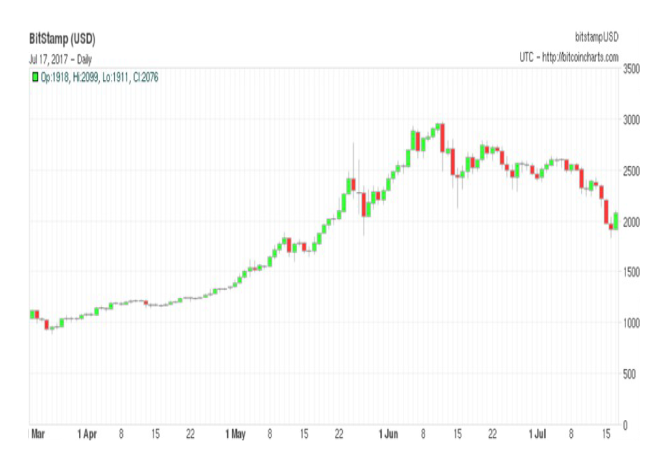 The recent price action needs to be seen in a broader context. The price has increased from less than BTCUSD 1000 in late March. On April 1st the Japanese authorities officially recognised BTC for the first time: perhaps, this was the catalyst for its spectacular rise.
The subsequent precipitous decline in price may be related to a proposed software change to be introduced on 21st July, known as SegWit, which is discussed in Cryptocurrency Value: Growing Pains or Something More? by Ryan Shea – here's the rub:

"SegWit2x software, which introduces SegWit while doubling the block size to 2MB, will be released on July 21. More than 80% of the network hash rate has agreed to run the SegWit2x code, which suggests that the solution to increasing bitcoin's scalability will be enacted smoothly.
"However, it is also possible that the hard fork required to increase the block size leads to a bifurcation of bitcoin into two separate currencies -something that would unquestionably trigger a sharp price correction by undermining the bitcoin brand. (The key date by which a split can be avoided is August 1 when BIP148 activates – this represents the last opportunity for miners to accept Segwit2x and thereby avoid a chain split resulting in the creation of two parallel bitcoins.)"

There have been victories and defeats during the evolution of BTC, as it has evolved from an obscure novelty to a serious contender for investors seeking a store of value. The price volatility reflects these uncertainties but it is not demonstrably different from the volatility seen in several commodity markets.
For a security, commodity or a currency to gain credence among financial market operators, it needs to offer a store of value, liquidity and convertibility.
If it can achieve these attributes it should have collateral value, by which I mean, BTC should be capable of being borrowed or lent. This is already happening. Some cryptocurrency exchanges are offering a rate of interest on term deposits and others offer the opportunity for holders of BTC to lend their currency to traders who wish to borrow it, primarily to sell the currency short.
Whilst there is not really a 'risk-free rate' for BTC an interest rate term structure is beginning to emerge as the table below, derived from a number of exchanges, shows. 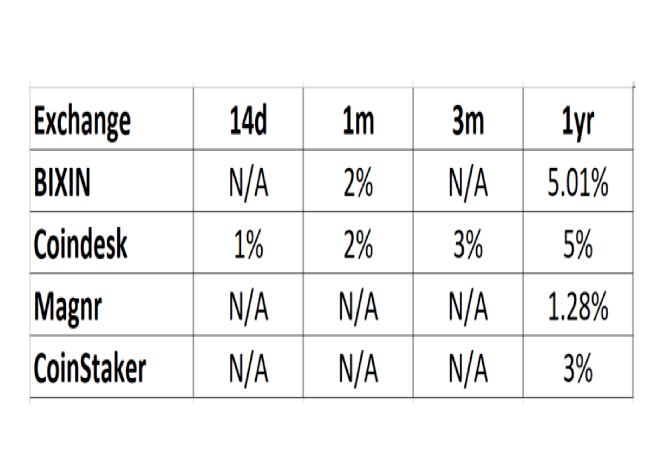 There may well be other exchanges offering a variety of differing interest rates. But this, I hope, provides a snapshot of the current environment.
The other aspect of financial deepening which will help BTC come of age is the development of a derivatives market. I believe the arrival of exchanges for BTC futures and options is a very positive signal.
The futures exchanges include Okex, CryptoFacilties, BitMEX, BitVC, Coinut and Deribitwhich also offers options – there may be several others. Today (Monday 17th July) I have taken some snap shots of the futures and options pricing from Deribit.
With the BTCUSD spot price at 2027, the July future (expiration 28th July) traded at a discount of $12 ($2015) this is known in futures parlance as a backwardation. The September contract (expiration 29th September) was, by contrast, trading at a premium, or contango ($2070). Because of high demand from leveraged traders to borrow US$ to buy BTC the forward/futures price of BTCUSD normally trades at a premium (contango). The current environment is unusual, the forced liquidation which has fuelled the recent collapse in the price has led to, what is likely to be a temporary, backwardation.
John Jansen – CEO of Deribit- explained the anomaly during a recent interview:

"...when the market is bullish, US$ interest rates spike up and BTC interest rates go down: uses want to borrow USD to buy BTC. In other words, short USD and go long BTC...there is an overall tendency for speculators to be long, therefore, the arbitrage traders are short BTC (lending out their USD) or short the future. USD interest rates are, therefore, normally higher than BTC rates which explains the contango in BTCUSD futures prices.
"...on BTC platforms, annualized interest rates on US$ are on average maybe 20%...which would imply that the future should trade at a 20% annualized contango. Arbitrage traders take the other side of the trade...but get paid for their trouble."

Over time I expect the BTC market to become more efficient and the natural relationship for BTC futures should (other things equal) eventually become a small backwardation, reflecting the 1.5% differential between lower US$ and higher BTC interest rates. There are a number of arbitrage opportunities for those who want to dig deeper, but remember credit risk, both in terms of counterparties and exchanges, together with risks surrounding convertibility are nuanced. It may not be the free-lunch you perceive it to be.
This brings me to the BTC option market. Deribit shows some important features. Firstly, implied volatility is trading at a substantial premium to historic volatility. The chart below shows the evolution of historic volatility and the BTC price over the last three months. 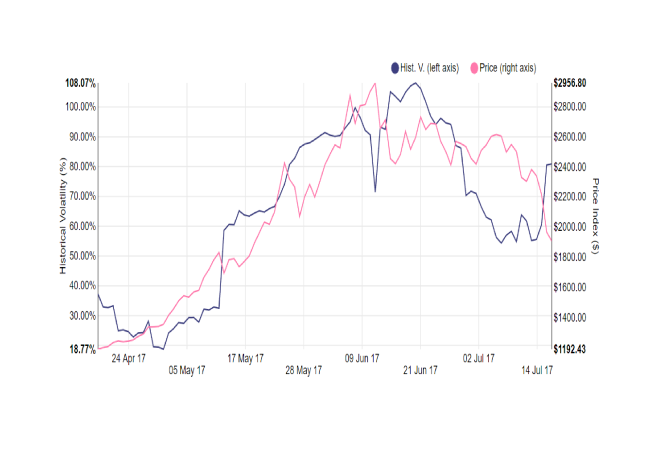 The July option series expires on 28th but the mid-market implied volatility for the September 29th expiration is not significantly lower – implied call volatility stands at 97%, for puts it is 85%.
At this stage in the development of the BTC options market, I suspect the majority of the buyers are speculative traders rather than desperate hedgers, but option market-makers are wise to build in a margin of safety given the tendency of the underlying market price to gap lower or higher: delta and gamma hedging is challenging with these price swings. The bid/offer spreads on the options are also wide, another reflection of the nascent nature of the marketplace.
A final measure of immaturity – or perhaps I should say, opportunity – which the option market reveals, may be found in the shape of the volatility surface. The chart below is extrapolated from the mid-market implied volatilities in the table above. 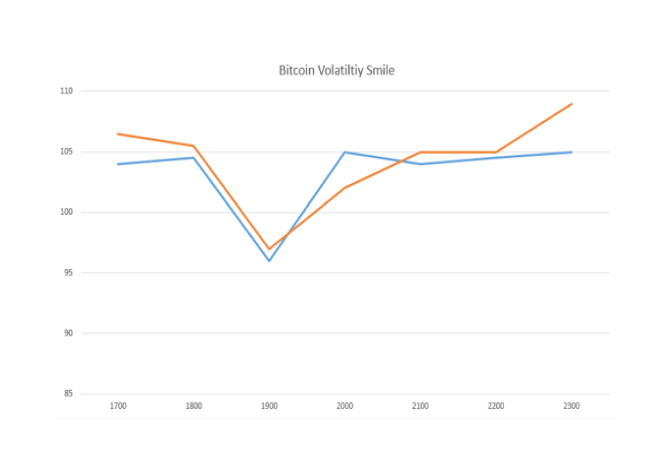 In a liquid options market one would normally expect the lowest implied volatility to be at-the-money – around the $2000 strike price. In the chart above the nadir of volatility is around the $1900 strike, a level breached briefly last weekend.
Cryptocurrencies have captured the imagination of many new participants, from geeks to gold bugs, but as BTC achieves greater legitimacy the market will deepen and mature. The adoption of scalable technology to deal with the exponential increases in trading volume is a part of this process. The acceptance of distributed ledger technology across other parts of the financial services sector will also be supportive.
From a technical perspective the price of BTC has corrected by around 50% – since March it has risen from under $1000 to $3000 and is now back around $2000 (Monday 17th July). In absolute terms it has fallen by just over one third. This is a healthy price correction, typical of the price action witnessed from time to time in more liquid and established commodity markets. US Natural Gas springs to mind.
As an investment, the argument for holding BTC is more tenuous. It is a currency with no government or central bank to underwrite its value, however, the expansion of the BTC monetary base is strictly controlled, making it more like a hard currency, such as we had during the Bretton Woods era, as opposed to the endlessly debased fiat currencies we are inveigled to consider of value today.
Currencies have no implicit yield but BTCUSD currently offers a theoretical positive carry of around 1.5%. As mentioned above, this relationship is currently distorted by the demand to borrow US$ to buy BTC by leveraged traders. Any investment which has no earnings and pays no dividend/coupon/interest must by its nature be a trading asset. However, strategies such as high frequency, robotic, liquidity provision and long term, trend following, are among a number of exciting trading opportunities for the active BTC operator.
The fundamentals driving BTC investment revolve around investor distrust in fiat currencies, loathing of government intervention in asset markets, and belief in the tenability of cryptocurrencies as a lasting store of value both from a technical and regulatory perspective. These fundamental drivers of valuation have, in the past and will in the future, cause sudden repricings. Outside of these seismic episodes, the price of BTC will be driven by capital flows.
With liquid currency pairs like EURUSD, the economic fundamentals of both geographic regions are of equal importance. This is unlikely to be the case for BTC for the foreseeable future. BTC volatility eclipses the majority of its developed currency peers; its true value, whilst it is becoming gradually clearer, will remain ephemeral for some time to come.