END_OF_DOCUMENT_TOKEN_TO_BE_REPLACED

The factors that used to keep inflation down have now disappeared...

IN OCTOBER 1992, the UK government introduced a framework based on an inflation target to guide monetary policy decisions. For the first 15 years of this period, things seemed to go pretty well, writes former Bank of England Monetary Policy Committee member Andrew Sentance.

Inflation averaged very close to the target – initially 2.5% for RPIX (retail price index excluding mortgage interest payments) and then 2% for CPI (consumer price index, targeted from 2004). But this "good" average performance concealed very different trends in the main components of the inflation index.

This is illustrated clearly in the chart below. Services inflation has averaged consistently close to 4%, double the current inflation target, since the early 1990s. The only reason why overall inflation performance was satisfactory until the mid-2000s was that the UK experienced static or falling goods prices. This was the product of two main factors – the appreciation of sterling in 1996/97 and the impact of China and other low-cost producers on global prices from the 1990s onwards. 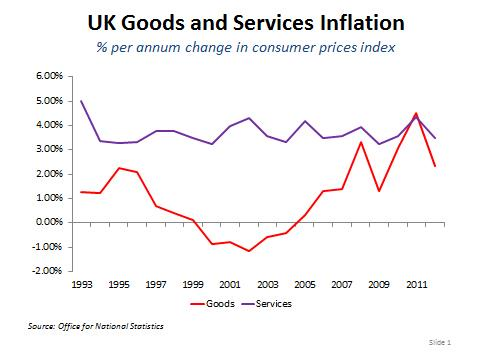 However, both of these disinflationary forces have now disappeared. Since the mid-2000s, the global economy has provided an inflationary impetus as a result of upward pressure on global energy and commodity prices. At the same time, strong growth in China and other emerging market economies has resulted in high domestic cost inflation in these economies, which has also added to the cost of imports to western economies like the UK.

For the UK, rising import costs are being reinforced by a falling currency. Sterling depreciated sharply against other currencies in the global financial crisis. Over a 2-year period, this marked the biggest fall in the value of sterling against our major trading partners since 1931, when the UK departed from the Gold Standard.

No longer is the UK benefiting from a favourable tailwind of flat or falling goods prices. This puts the spotlight on the persistence of services inflation.

Three main influences have been at work. First, services sector prices are much less exposed to international competition – which has been the main disinflationary influence on the UK in the past two decades. The prices charged by car park operators, piano tuners, restaurants and other suppliers of consumer services are not subject to the rigours of international competition in the same way as retailers of goods who can take advantage of purchasing at the most competitive prices on global markets.

Second, until 2007, consumer spending growth in the UK was very buoyant and this created an environment in  which firms found it very easy to increase prices. That should have changed with the onset of the financial crisis, but it didn't. Big cuts in interest rates and the additional stimulus from Quantitative Easing encouraged companies to raise prices in the same way as they had before the recession. In "economic-speak" we did not see the sharp jolt to inflation expectations in response to the recession, because policy-makers have been so clearly focussed on maintaining demand.

Third, the signals sent by government and the Bank of England have been very tolerant of high inflation. Very significant deviations from the 2% inflation target have been tolerated without any policy response from the Bank of England in the form of higher interest rates. And the letter exchanges between the Governor and the Chancellor have shown implicit government support for this strategy. At the same time, there has also been little government resistance to very substantial increases in regulated prices. Last year, UK postal prices rose 30—40%. Rail fares rose this January by over 4%. And car park charges at London Underground stations are set to rise by nearly 20% this year.

These three factors have helped to sustain a view that prices in the UK services sector can rise at around 4% or more, despite the impact of the recession. Without a change in this inflationary psychology, it will be almost impossible for the MPC to hit its 2% target. The amazing thing  is that the MPC seems so unconcerned about this situation, and is happy to trust in hope that inflation will eventually come back to target or fall below – when our experience over the past five years has been totally contrary to this view.

Get the safest gold at the lowest possible price when you use BullionVault...