END_OF_DOCUMENT_TOKEN_TO_BE_REPLACED

WITH only three days left before UK voters head to the polls, writes Frank Holmes at US Global Investors, expectations of which side might win are beginning to shift toward the "Brexiteers" but betting markets are still putting money on the "stay" campaign.

However, the probability of victory for those who favor keeping their European Union membership has weakened rather remarkably in the last month, falling from over 80% in mid-May to around 62% today, according to BCA Research. 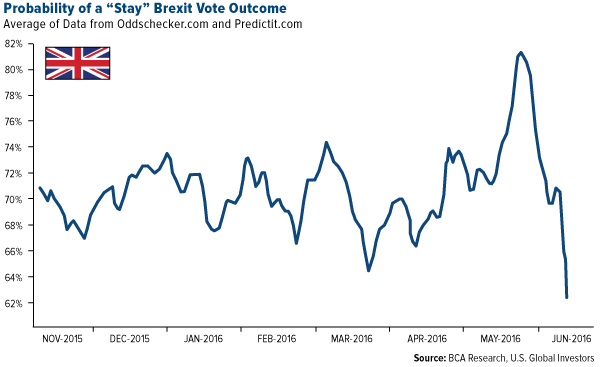 One of the main grievances is the burden of EU regulations, which are decided by unelected officials in Brussels with little to no cost-benefit analysis. These rules, which regulate everything from the number of hours someone can work (48 hours) to vacuum cleaner power, ultimately stifle growth and innovation.

Consider the so-called FANG stocks – Facebook, Amazon, Netflix and Google. These four tech behemoths, not to mention Apple, rank among the most disruptive, transformative companies the world has ever seen. They also happen to be American. Nothing like them exists in Europe – or, for that matter, anywhere else across the globe.

When's the last time a major scientific or technological breakthrough was made in France? In Germany? Where's Europe's answer to Silicon Valley?

It's not that these countries lack capable thinkers and entrepreneurs. Far from it. Europe was once at the center of everything, from science to music to business. But now that Piketty-style "envy economics" reign supreme in the EU, innovation has increasingly shifted west toward the US

And it doesn't end there. EU officials continually try to make demands on how these companies conduct their business, whether that be regulating Amazon and Netflix's original streaming content or suing Facebook over privacy issues.

These are among the questions and concerns Brexiteers and Eurosceptics are bringing to the fore. And no matter the referendum's outcome, they're not likely to go away any time soon. In fact, this could very well be the beginning and should serve as a wakeup call to EU policymakers. Just as American colonists protested taxation without representation over 240 years by dumping an entire shipment of English tea into Boston Harbor, many Brits today are staging their own taxpayers' revolt by demanding control over their own economy, budgeting, immigration policies and more.

This is more broadly a debate over common law (the UK) and civil law (the Continent). Under common law, there's greater protection of wealth and intellectual property. You're presumed innocent until proven guilty. Why are real estate prices higher in London, New York City and Hong Kong than in Rome, Paris and Berlin? Common law.

Also at issue is the EU's immigration and open borders policy, which has brought more than 600,000 asylum seekers into the UK in recent years.

I invite you to watch Brexit: The Movie, a Hollywood-caliber documentary that details many of the arguments in favor of the UK leaving the EU. When London financial markets were deregulated in the 1980s under Prime Minister Margaret Thatcher, it led to what is known as the "Big Bang," named for the skyrocketing growth in market activity, and the same could very well happen to the UK's economy post-Brexit.

The UK's EU club membership, so to speak, varies year-to-year, but it averages between 8 and 10 billion pounds – the equivalent of $11 billion and $14 billion – making the kingdom the third largest net contributor after Germany and France. But the costs don't stop there. Towering above the contribution to the EU's budget are costs associated with the bloc's endless regulations – what I refer to as indirect taxation.

According to Open Europe, a nonpartisan European policy think tank, the top 100 most expensive EU regulations set the UK back an annual 33.3 billion pounds, equivalent to $49 billion. This amount exceeds what the UK Treasury collects in Council Tax (a tax on domestic property) on an annual basis.

And remember, that's just the top 100. The "acquis communautaire," the EU's body of rules, directives and regulations, is a mammoth 170,000 pages long. Among the costliest regulations are the Renewable Energy Strategy (4.7 billion pounds a year), the Working Time Directive (4.2 billion a year) and the EU Climate and Energy Package (3.4 billion a year).

Tim Congdon, a prominent British economist and businessman, shows that such regulations – again, passed by unelected officials, similar to agencies here in the US – have been a significant detriment to EU growth. Writing for the pro-leave group Economists for Brexit, he states: "It is obvious that the economies of EU member states are falling behind those of other high-income countries, falling behind consistently, and by a significant amount. Too much regulation must be the main explanation." 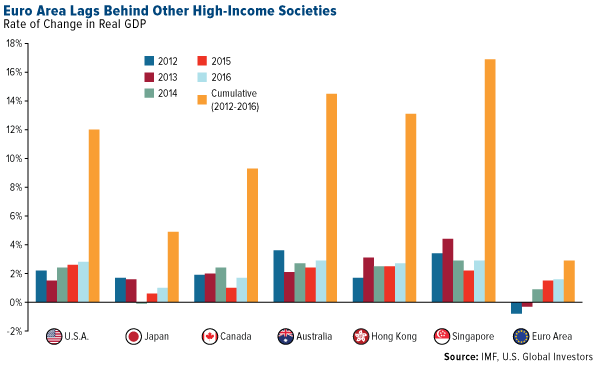 Of course, these rules won't disappear overnight if the UK chooses to leave. But it would be a step in the right direction toward repatriating a level of autonomy over the country's own laws.

In the meantime, investors are bracing for the referendum with gold, which has rallied 7% this month, breaking above $1300 an ounce . The yellow metal has historically been favored as a "safe haven" investment during times of political and economic uncertainty. Read my latest gold commentary on Forbes.

The EU is hardly the world's only offender when it comes to passing onerous regulations. The US government continues to add to the already-bloated Federal Registry, which now stands at 80,260 pages as of the end of 2015. That year, federal regulations cost US businesses a staggering $1.885 trillion, or $15,000 per household, according to the Competitiveness Enterprise Institute (CEI). If US regulations were its own economy, in fact, they would be the world's ninth largest, sandwiched in between India and Russia. 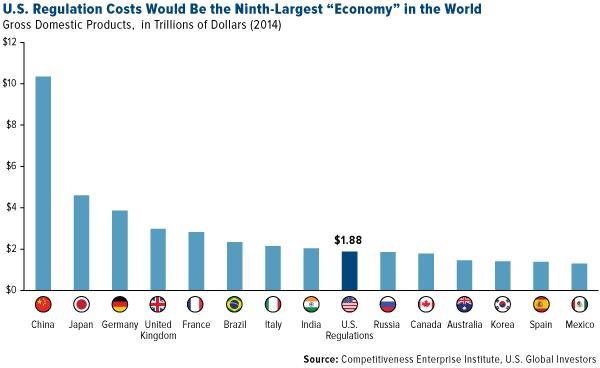 This is something our next president will have no choice but to address. 2015 was a record year for adding new regulations. We can't continue going down this path. The problem is that I haven't seen either Donald Trump or Hillary Clinton make a serious commitment to streamlining rules and laws that affect businesses, especially small to medium-size businesses. According to a 2015 National Small Business Association (NSBA) survey, "regulatory burdens" was near the top of the list of challenges small business owners said threatened growth and the survival of their companies. I'm convinced that the candidate with the strongest economic and deregulatory plan has the best chance at winning the election in November.

For whatever it's worth, though, a poll in Institutional Investor found that large-scale investors appear to favor Clinton for president right now by a pretty wide margin. When asked if Wall Street will rally behind Trump, a whopping 84% said no.