END_OF_DOCUMENT_TOKEN_TO_BE_REPLACED

Brexit was fine, said gold below £900. But then...
LIKE the UK's impending Brexit from the European Union, the word "gold" means many things to many people, writes Adrian Ash at BullionVault in what is, inevitably, a personal view.
To most financial advisors and pundits, gold is  an idiotic investment.
But to anyone studying the data, it's a great way to spread risk.
Or gold is "money" as J.P.Morgan said a hundred years ago, adding that "everything else is just credit"...
...while Hindu legend and culture see gold as protection against ill will, a bringer of good fortune...
...and some politicians believe it gives them independence from US rule...
...while central bankers hold it for security...
...and the ancient Aztecs called it "divine excrement".
Whatever your view, most people accept that gold also acts as a barometer.
A rising price tends to signal unease with the wider financial, economic or political outlook. A falling price tends to mean confidence is rising.
After peaking for instance amid the US debt downgrade, Eurozone crisis and English riots of summer 2011, gold prices sank as the stock market rose – and kept rising – over the following 5 years.
The metal then leapt again, most of all the  UK gold price in Pounds per ounce, as the British Government announced it would hold a referendum on quitting the European Union in June 2016.
That announcement saw gold rise at its fastest pace for UK investors since the record peak of summer 2011.
Over the first 7 weeks of 2016 gold jumped 20% in British Pounds.
On the day of the fateful result, it rose that much again  in less than 7 hours.
Fast forward to mid-October 2018, and the UK's actual exit from the EU is now fast approaching.
Using gold as a barometer, the eternal metal briefly said everything will be fine last week.
Gold dipped last Wednesday beneath £900 per ounce, a price not seen since the day of the 2016 referendum itself, when voters ambled to the polls to edge it for "out" and deliver that shock result that night.
If gold saw a Brexit crisis coming 2 years ago, it saw that crisis evaporate in early October 2018.
But only for an hour. 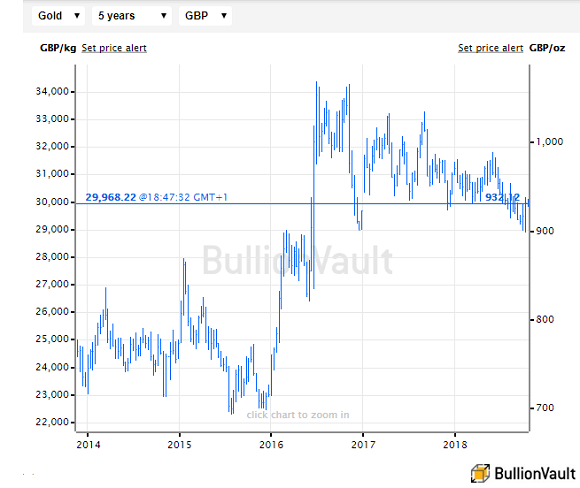 Gold priced in Sterling has jumped like a scalded cat since daring to suggest that Brexit might not be a crisis, leaping nearly 4% from that 28-month low.
So which is it? Drama or catastrophe? Or stuff and nonsense about nothing ?
Brexit, as Prime Minister Theresa May used to remind everyone,  means Brexit.
Whether it also gets to be red, white and blue however, it's still unclear quite how "Brexit" will change things. If at all. Even if it happens in 5 months or not.
This week was supposed to see the UK and the EU agree a final deal – one which May can then put to a vote in Parliament, and which the leaders of the remaining EU members will also need to approve – ready for D-Day on 29 March.
But with just 162 days to go, details keep getting in the way, not least  the very "real problem" of trying to avoid a hard border between Northern Ireland in the UK and the Republic of Ireland in the EU.
"If the Irish want to shoot each other," says the idiot who fathered the idiot who, as UK foreign secretary during the first 2 years of Brexit negotiations, managed to get nothing done beyond wrecking Britain's standing everywhere else and who apparently thinks he's Winston Churchill but isn't even Geoffrey Howe, "they will shoot each other whether there is a hard border or whether there is a soft border."
Such foul flippancy only finds a way into what passes for the UK's Brexit "debate" thanks to the media's utter failure to grasp, never mind explain, the biggest issue of the day beyond making it a Punch 'n Judy show of personality and thus "personalities". Hoping we get mere disaster on 29 March might prove wishful thinking given how we're set to reach it.
But for the deal itself, and instead of having cake and eating it – with or without  cherries on top – what we will most likely end up with is fudge.
Euro-fudge in fact...even more sickly than Europe's fudged deficit rules or polar-bear protections or national bail-outs since the financial crisis.

This Brexit fudge will be revolting to most people who voted to Leave. It will probably stick in the throat of  the other two-thirds of the UK electorate too. Not least because it means the gnashing of teeth will never end.
But what it will try to avoid is exactly that – the revolution which so many Leave voters wanted.
Some Leave voters I know wanted to overthrow the monster of EU bureaucracy.
Some wanted in particular to  throw off its unelected leadership.
Others wanted to push back against uncontrolled immigration through the free movement of people...
...while some wanted to end the free movement of capital...
...which some others apparently want to keep while ripping up everything else.
Some of my own dearest (if not nearest since I moved south) used the vote as a revolt against the arrogance, privilege and wealth of what they call "London"...personified by David Cameron, who called the referendum as Prime Minister simply because he thought he could never lose it.
That last motive for voting "out" had nothing to do with the EU. Like most of the others, it also risks badly missing its aim.
But a decade after the financial crisis failed to burst the bubble in finance, people are pushing to overturn the way things are done all across the Western world.
"Those who make peaceful revolution impossible will make violent revolution inevitable," as the US President who did so much to make the Vietnam War the catastrophe it became once said. And while gun-fire hasn't yet broken out across in Europe or the US since tax-payers rescued the casino bankers instead of beheading them, the stakes and the temperature keep rising.
Italy's coalition government is  trying to overthrow the bond market having a say on its spending policies...
Donald Trump is fighting how globalization imports stuff from China and Germany by (as he sees it) exporting jobs...
Voters in  Bavaria just rebelled against the cosy "centrist" set-up of German politics and its radical open-door immigration...

...and the UK's own Jeremy Corbyn wants to over-turn pretty much everything in a radical return to the 1970s if a "no deal" Brexit destroys the Conservative Party's last pretence of competence and hands Labour the next election.
Added together, all these revolutions are shaking up the way things are done just as the post-crisis stock market boom starts to wobble. Gold is meantime picking up from multi-year lows.
Gold won't do much to fill supermarket shelves or clear UK aircraft for landing if "no deal" really does mean "no deal". It might not do much to defend UK savers' meagre retirements either. Because bullion prices rarely respond to political headlines alone.
But if those headlines start shaking the stock market, gold's "safe haven" appeal is likely to shine all the brighter.
Especially for those bankers, fund managers and family offices who fear a revolution is coming to get them, but who won't dare to buy until the price has turned very much higher from here.