END_OF_DOCUMENT_TOKEN_TO_BE_REPLACED

The 3 AMIGOS were this blogger's way of not boring himself to death while fleshing out important macro indicators month after month, writes Gary Tanashian in his Notes from the Rabbit Hole.

Amigo #1 (SPX/Gold ratio) got home and dropped from target. What's more, it has taken back the ratio's equivalent of the entire Trump rally and that is an eventuality we are very open to on the nominal S&P500 index as well.

The gaps are interesting and among several possibilities for 2019 we could see fear, loathing and a fill of the lower gap (a greed gap of sorts) prior to a filling of the upper gap, which could blow out the stock bull in manic fashion one day.

Relax, it's just one of several possible road maps. For now, we simply state that SPX/Gold reached a very viable target and dutifully dropped with the market stress. 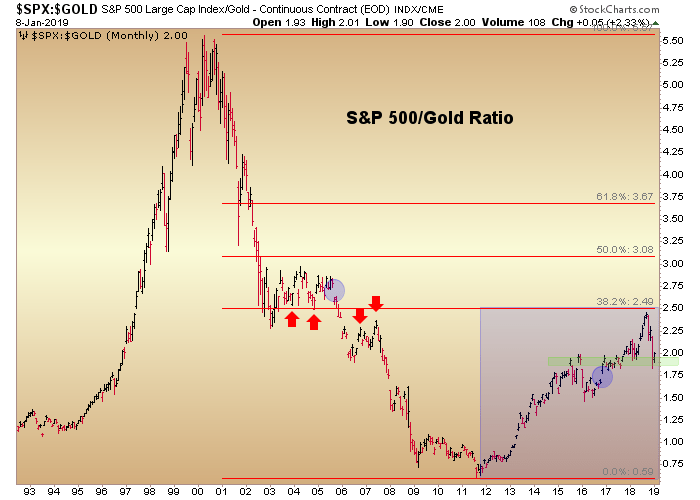 Amigo #2 (30-yr Treasury yield AKA the Continuum) got the bond bears on the wrong side of the boat and kept them there for a couple of months before the big reversal (back below the monthly EMA 100) that came along with the risk 'off' rush amid Q4 2018's market stress.

A breakout was going to change everything. A failure, as has come about, keeps the macro orderly and keeps the Fed sitting pretty. I continue to recommend not personalizing Jerome Powell (as our dear and 'fantastic' leader has done).

Powell has done exactly what I'd have done were I the Fed Chairman. Ha ha ha. 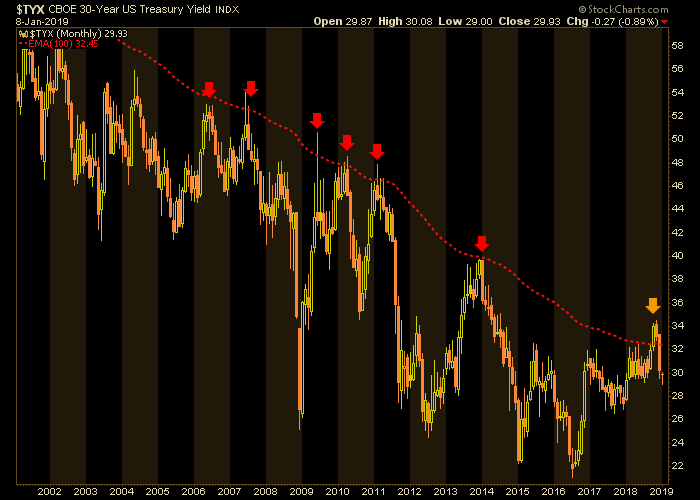 A reader causes me to clarify. He questions whether I think the Fed deliberately engineered a market correction to push yields lower and I answer thusly...

"Well, I try not to wear a tin foil hat but I don't think the Fed or its agenda would have benefited from a secular change in yield dynamics. So I don't think Powell minds that pressure came upon over heated markets with inflation expectations previously elevated. In other words, I don't think a little market stress was going to see him flip so easily because the fiscal reflation was overlaid on top of the Fed's already existing monetary inflation."

And finally, Amigo #3 (the yield curve) is still out there, indicating 'boom (still) on' as the media amplifies the drive toward inversion as a signal to recession.

First of all, there is no real significance to inversion or a lack thereof. The fact is that the thing is flattening and that goes with boom times or at least a stable economic backdrop. The extended flattening implies risk, but on a monthly chart of an indicator that is not a good real-time signal, high risk can easily carry on with a positive backdrop for a period someone positioning on this indicator's big picture risk profile might find inconvenient. 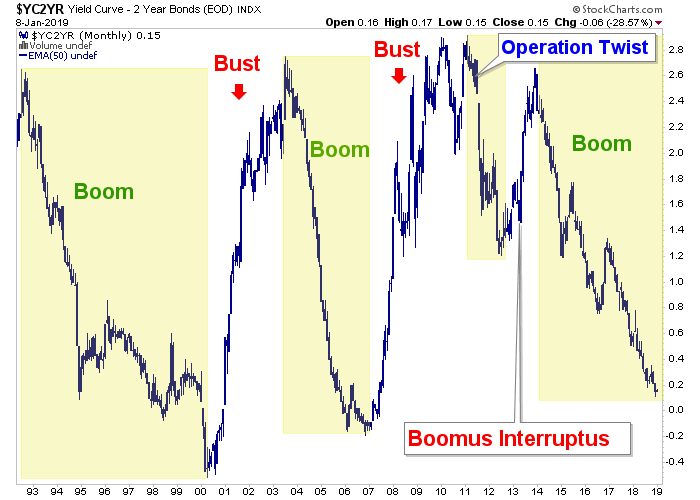 #1: The stock market is not out of the woods, technically. Nominal markets are bouncing as expected to logical resistance areas. The SPX/Gold ratio has however taken a lot of the froth (and risk) out. We cannot rule out a near-term fill of the lower gap on SPX/Gold or a longer-term fill of the upper gap. The current NFTRH plan is that the stock market's correction is not over (pending our bounce parameters and key resistance) but nor necessarily, is its major bull market.

#2: 30 year Treasury yields have dutifully pulled back below the Continuum's limiter (monthly EMA 100). This put inflation expectations back in the box and is reestablishing the Fed's power (and leverage) over asset markets. Ironically, these events put the Fed back in position to one day flip a switch and become a friend of the market again, because their inflationary apparatus would be intact (as opposed to blown up in an inflationary Crack Up Boom, ala von Mises).

#3: The Yield Curve continues to flatten and the economic boom is still on. It is mature and at risk. But the reason we used 3 indicators (along with a bunch of others in NFTRH) is to cross reference and refine probabilities.

If you are a bear for a long cycle, you might want to keep a close eye on this one. It is not your friend yet.